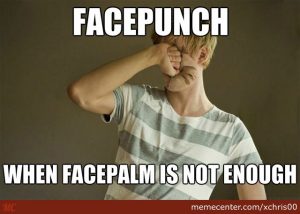 National Rifle Association President Wayne LaPierre had an absolute meltdown at the organization’s annual conference on Friday about voting rights. LaPierre is extremely pissed off that Democrats want to restore voting rights to ex-felons. Apparently, he doesn’t think these people deserve the right to vote, but he’s totally cool with violent felons owning guns.

During his speech in Louisville, Kentucky, LaPierre said:

“There is no limit to how far the elites will go to put Hillary in the White House. They’re even allowing convicted felons the right to vote, including violent rapists and murderers. It sounds outrageous, but it’s true. The Democratic-led Maryland General Assembly did it for 44,000 ex-cons. In Virginia, Democratic Gov. Terry McAuliffe — Hillary’s longtime bagman — did it for 206,000 convicted felons.

Tentacles of the Clinton machine are out registering those felons right now. They’re releasing them and then they’re registering them! Heck, when they sign their release papers, they might as well just give them a Hillary bumper sticker at the prison door.”

The NRA president isn’t wrong. Maryland and Virginia DID restore voting rights for that number of people and rightfully so.  Unlike Republicans, we believe that everyone deserves the right to vote. Voting is in an inalienable right and it should not be taken away because someone was convicted of a felony. I personally believe that even my father’s murderer should be allowed to vote. I loathe him, but my personal feelings should not have any influence over whether or not he performs his civic duty. He was convicted of killing my dad, went to prison, served his time and released. He was held accountable for his actions, paid the price and now is free to live his life.

Republicans, on the other hand, are against restoring voting rights because felons are disproportionately likely to be minorities (my dad’s murderer was white) and minorities tend to be Democratic voters. The GOP are notorious for voter suppression shenanigans targeting poor, minority and young voters because they know that the fewer people at the polls, the more likely they are to win. So, of course, LaPierre doesn’t want felons to have their voting rights restored, but he does want them to own guns.

According to the Huffington Post the NRA and the Republicans they have in their pockets have been fighting for decades to restore gun ownership rights to felons. In many cases, those felons were convicted of violent crimes and when they were allowed to own firearms again, they committed more offenses. That is of no consequence to the right or the NRA, because they believe in second chances! For gun owners, anyway.

In 2015, Rep. Ken Buck (R-Colo.) sponsored an amendment that would have funded a program to restore Second Amendment rights to ex-offenders. During a floor speech, Buck said,”“America is a land of second chances. One mistake should not define your future.” The NRA boasted about the amendment on their Facebook page:

“The land of second chances” unless you would like to vote. The hypocrisy is breathtaking, isn’t it? Now, the right could argue that we, too, are being hypocrites because we do not believe that ex-felons should be allowed to own guns again. I disagree. I’m fine with ex-felons having their gun ownership rights restored IF they did not commit a violent felony. I’m sorry, but if you hurt somebody and went to prison for it, you cannot be trusted with a gun. Period. Owning a firearm and voting is not the same thing.

Wayne LaPierre and his followers only care about one thing: arming as many people as they possibly can so that gun manufacturers get richer and richer. They don’t actually care about ex-felons, because is they did they’d make sure the same people they wanted to give guns to, also had their rights to participate in their democracy restored.