In the Medieval ages there was an incredible amount of criminals, mostly because of impunity which gave them freedom to commit crimes.

In the Medieval ages there was an incredible amount of criminals, mostly because of impunity which gave them freedom to commit crimes. Another big reason was education because most burglars were not educated, so in order to survive, they had to steal. Other factor was the bad economy which could sometimes collapse from different reasons such as raids or natural disasters. If your family was starving you had to find a way to feed them somehow. Therefore, you could either go in debt or commit a crime and risk it all.

There were a lot of ways to punish and torture a criminal in the Middle Ages; even if the thief stole something as simple as bread he had to be tortured. Strangely enough, burglars were rarely killed as punishment. They would mostly face public humiliation and torture as there were different kinds of punishments for different crimes. Unfaithful wives were considered criminals and they were treated accordingly. Witches were considered criminals as well; heresy and blasphemy were considered to be one of the biggest crimes. 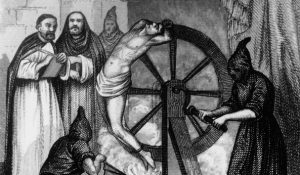 Throwing criminals in prison happened very often and some prisons even had torture chambers. A lot of Kings were obsessed with their kingdom’s crime reputation and were very much devoted to seize every man who is guilty of committing a crime.

Another heavy crime that was very frequent in medieval times was the kidnapping. Kidnapping was mostly done by invaders. They would capture people from an adversarial territory and would enslave them in their kingdoms to work on their lands but also populate the kingdom. This crime was punished very viciously, especially if the kidnapped victim was part of the royalty or a noble family. If this was the case, the criminal would be tortured heavily and executed in public.

Most kingdoms were very skeptic about this and they imposed heavy penalties to captured thieves. This led to much Medieval Folklore – including the legend of Robin Hood. 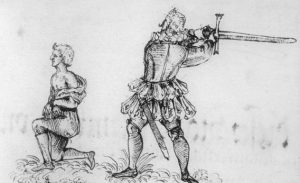 This, of course, inspired fear in the common peasants and the rate of crime was substantially decreased. It was common for a town to express its anger against a thief by hanging him in public. When the Guillotine was introduced into medieval Europe, it quickly started being used for executing criminals.

Nobles and the Church 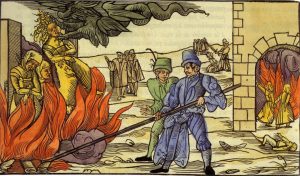 Crimes were, for the most part, done by the poor. Nevertheless, there are records of nobles and knights being hanged for robbing.

Rape was not considered a major offense because women had not as many rights as men. Nevertheless, it was a crime to marry a relative as it was strictly forbidden by the church.

For kings and high nobles, punishment was almost non-existent. They could practically get away with raping, abusing, etc. Kings even had a right to stay in whichever house they pleased and sleep with whichever woman they wanted to, simply because they were “appointed by God.” Unfortunately, punishment was mostly reserved for the lower class.