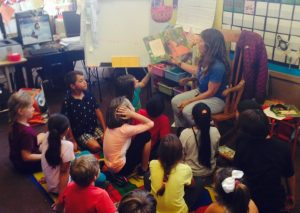 If you are a parent or a teacher, you most probably read stories to young children. Together, you laugh and point at the pictures. You engage them with a few simple questions. And they respond.

So what happens to children when they participate in shared reading? Does it make a difference to their learning? If so, what aspects of their learning are affected?

British researcher Don Holdaway was the first to point out the benefits of shared reading. He noted that children found these moments to be some of their happiest. He also found that children developed positive and strong associations with spoken language and the physical book itself, during these moments.

Since then a number of studies have been conducted showing the value of shared reading in children’s language development, especially in vocabulary and concept development.

Early childhood researcher Vivian Paley, for example, during her work in the University of Chicago Laboratory Schools, found that kindergarten children learned when a story was dramatized in shared reading. Not only did children develop oral language, they imaginatively learned the conventions of a story, such as character, plot and themes. In shared storytelling, children also learned how to use language in multiple ways.

Other research found that shared reading was related to the development of expressive vocabulary. That is, children developed listening skills and built an understanding of grammar as well as vocabulary in the context of the story.

As a language and literacy researcher, I work with teachers to develop reading strategies that develop children’s interest in reading and help them think critically. Kay Cowan, an early childhood researcher who studies the role of the arts in language learning, and I conducted two studies to understand children’s language development in grades one to five. 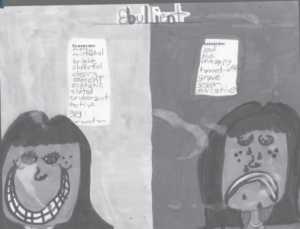 We worked with approximately 75 children across grade levels. We began our language study by talking with the students about the power of words, and the role they play in and outside of school. Following this, we discussed the pleasures associated with words. We then read “Shadow,” an award-winning picture book by children’s author Marcia Brown, and poems by Shel Silverstein, another children’s author.

Children were then asked to think of an “absolutely wonderful” event that they had experienced, and associate an emotion with it. Children chose a personal event that elicited emotions. They then drew contrasting images of the word that showed opposite emotions, and studied synonyms and antonyms to understand the “shades of meaning.” They then wrote descriptive poetry to convey this emotion.

All children – even those who were at the risk of failing – used vivid language. Children described words like “ebullient” and “melancholy” in ways that related to their own emotion.

One child described her word “ebullient” as “bright,” and “merry,” and “never asking for anything.” “Ebullient” was also “warm,” and “gypsy-like,” and so on. Another described loneliness as “…making me feel cold/Like an icicle/wanting to melt away.”

Following this exercise, children noticed that their writing was much better. It showed us how wide and varied reading, repetition and varied encounters with words were extremely important for children to have a depth of understanding as well as verbal flexibility – being able to express the meaning of word in different ways.

Long-term studies by linguistic anthropologist Shirley Brice Heath and other literacy scholars have documented children’s ability to read as related to their families’ beliefs about reading, the quality of conversation at home and access to print materials prior to their entry into school. 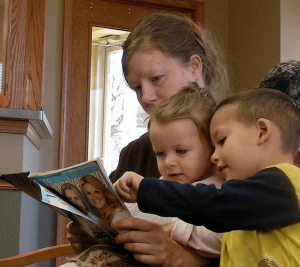 For 10 years, Heath studied two communities a few miles a part, one black working-class and one white working-class. She documented how family practices (e.g., oral storytelling, reading books, talk) influenced children’s language development at home and in school. For example, children read and talked about stories, were asked questions about the stories or told stories about their lives, events and situations in which they were involved. Parents engaged their children in these experiences to prepare them to do well in school.

Similarly, researcher Victoria Purcell-Gates worked with an Appalachian family, specifically mother Jenny and son Donny, to help them learn to read. With Jenny, they read and talked about picture books, listened to and read along with books on tape and wrote in a journal. With Donny, they shared reading, labeled pictures and wrote stories. Jenny was able to read picture books to her sons, while Donny learned to write letters to his dad in prison.

Other researchers have found that when parents, specifically mothers, knew how to interact with their children during shared reading using positive reinforcement and asking questions about the story, both children and mothers benefited.

Mothers learned how to ask open-ended questions, and prompted their children to respond to stories. Children were more engaged and enthusiastic about the shared reading experience. They also were able to talk more about the story’s content, and were able to talk about the relationship between pictures and story.

What’s more, shared story experiences have also been shown to have an influence on children’s understanding of math concepts and geometry in kindergarten.

Shared reading in a digital world

While shared reading is often associated with print books, shared reading can be extended to digital texts such as blogs, podcasts, text messages, video and other complex combinations of print, image, sound, animation and so on.

Good video games, for example, incorporate many learning principles, such as interaction, problem-solving and risk-taking, among others. As in shared reading, children interact with their parents, teachers or peers as they engage in stories. 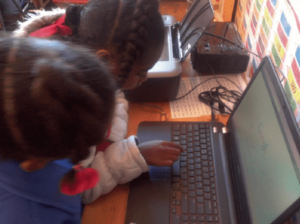 Adrian, who played a video game, Gauntlet Legends, created a story in Ranker’s class, to which he added many drawings to show the movement of characters.

In this case study, Ranker found that children like Adrian who play video games learn how to produce stories that do not follow the linear pattern found in print stories (exposition, climax, resolution). Rather, children experience stories at “levels” that allow characters and plots to move in many directions, eventually coming to resolution.

Similarly, children with access to certain apps are coordinating their storytelling on a touchscreen. They choose characters for their stories. They move them around with their fingers, and drag-and-drop them in and out of the story. If they want to create more complex stories, they work with others to coordinate characters’ movements. Sharing stories, then, becomes collaborative, imaginative and dynamic through these digital mediums.

Children, in essence, have redesigned how stories are told and experienced, demonstrating imagination, vision and problem-solving.

One thing that is clear across research is that rich complex language development does not happen merely by pointing at letters or pronouncing words out of context. It is engagement, and guided attention to language conventions, that matter in shared reading.

Ultimately, what is important is that shared reading must be a joyful experience for the child. Sharing stories must allow for a personal connection and allow for interaction and a shared learning.