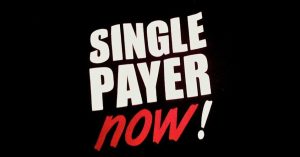 “In the United States, the right to medical care remains a dream deferred.” (Photo: Juhan Sonin/flickr/cc)

‘We can continue down this harmful path or we can embrace the long-overdue remedy that we know will work: a publicly financed, nonprofit, single-payer system that covers everybody.’

Despite limited advances provided by the Affordable Care Act, the U.S. healthcare system remains “uniquely wasteful” and profit-driven, leaving tens of millions without any insurance and even more underinsured.

As a result, say leading physicians, “the right to medical care remains a dream deferred.”

In an effort to finally realize that dream, thousands of medical professionals across the country have signed onto the “Physicians’ Proposal for Single-Payer Health Care Reform,” calling for a publicly financed, single-payer National Health Program (NHP) that would cover all Americans for all medically necessary care.

The plan, unveiled Thursday in the American Journal of Public Health, aims to “remedy the persistent shortcomings of the current health care system,” reads an accompanying editorial.

It comes as the 2016 presidential race has thrust the issue of healthcare back into the national spotlight, and while the proposal is non-partisan, it hews closely to Bernie Sanders’ call for Medicare-for-All.

Drafted by a working group of 39 physicians and endorsed by more than 2,231 other physicians and 149 medical students, the proposal “would save enough on administrative overhead to provide comprehensive coverage to the uninsured and to upgrade coverage for everyone else, thus requiring no increase in total health spending,” according (pdf) to Physicians for a National Health Program (PHNP), which is backing the effort.

Under the proposal, according to PHNP:

“Our nation is at a crossroads,” said Dr. Adam Gaffney, a Boston-based pulmonary disease and critical care specialist who co-chaired the working group that produced the proposal. “Despite the passage of the Affordable Care Act six years ago, 30 million Americans remain uninsured, an even greater number are underinsured, financial barriers to care like co-pays and deductibles are rising, bureaucracy is growing, provider networks are narrowing, and medical costs are continuing to climb.”

As a result, Gaffney continued, “Caring relationships are increasingly taking a back seat to the financial prerogatives of insurance firms, corporate providers, and Big Pharma.”

Supporting Gaffney’s claim, a separate study published in the May 2016 issue of Monthly Review finds that the Affordable Care Act’s neoliberal approach to expanding health insurance has in fact failed in other countries such as Colombia, Chile, and Mexico, where corporate profits have soared, the safety net of public hospitals and clinics has deteriorated, and health costs have increased.

“We can continue down this harmful path—or even worse, take an alternative, ‘free-market’ route that would compound our problems—or we can embrace the long-overdue remedy that we know will work: the creation of a publicly financed, nonprofit, single-payer system that covers everybody,” said Dr. Steffie Woolhandler, a co-author of the single-payer editorial and proposal who is a professor of public health at the City University of New York’s Hunter College and lecturer at Harvard Medical School.

“Today we’re saying we must quickly make that shift,” Woolhandler said. “Lives are literally at stake.”