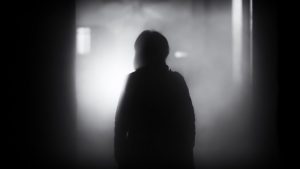 No evidence supports the existence of haunted houses, but in a largely secular society, an increasing number of us are finding comfort in the belief that buildings can host a ghost. 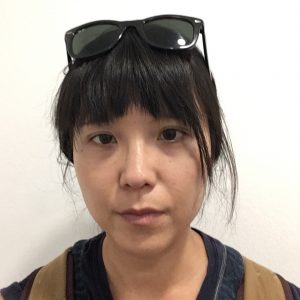 In many countries around the world there are artificial haunted houses, attractions set up for the purposes of fairground entertainment, featuring over-the-top ogres and spirits that are often more amusing than scary. But in parallel to this industry, there’s a persistent belief that haunted houses are real.

Fifty-two per cent of Americans surveyed in 2017 believed that spaces can be haunted. Brits are more likely to believe in ghosts than a divine creator. And Taiwanese landlords are apprehensive about renting to elderly tenants for fear that their deaths could lead to hauntings.

Belief in the paranormal is actually growing as societies become more secular. People are searching for different modes of spirituality, and reality TV programmes like ‘Most Haunted’ are surging in popularity. This belief, however ambiguous, provides a way to find meaning and to explain a host of puzzling and frightening situations, from unexplained noises to the finality of death. 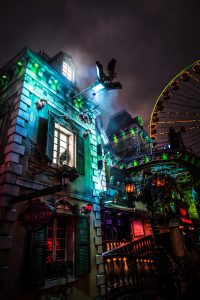 Haunted house at a funfair in Ravensbrück, Germany.

For instance, the team of Christopher French, Head of the Anomalistic Psychology Research Unit at Goldsmiths University, (and someone who was petrified of ghosts as a kid) created an artificial haunted room. This space was empty, dimly lit and cool – and exposed visitors to electromagnetic fields and infrasound, which are often associated with apparent hauntings.

Cognitive tests showed that people generally had the same reactions, regardless of whether the electromagnetic fields or infrasound had been activated. In other words, their predisposition to believe was more powerful than the building conditions.

Belief in haunted houses, like belief in supernatural experiences more generally, is compelling for a host of reasons. I spoke to professors of psychology, religion and literature, to find out what they might be. 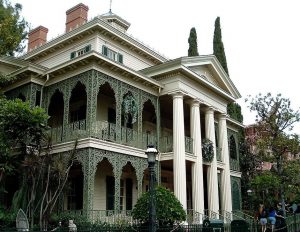 Humans have tamed much of the natural world, but there’s some part of us that still longs for the primitive. Haunted houses represent a triumph of wild space over attempts to exert human mastery.

Christine Junker, a professor of English at Wright State University in Ohio, tells me that “there’s something significantly comforting, at least for some people, about the idea that space itself might be untameable”. From an environmental perspective, she says, “Haunted-house narratives… provide the fantasy that even the most domesticated spaces can return to a wilder state of being.”

This idea that a house can have its own untameable volition may be especially satisfying for women. Domestic space has traditionally conferred a status and particular role upon women but also kept them cloistered from public life.

Junker explains the gendered appeal: “If houses that might appear subdued and inert are actually not at all those things… by association it becomes reassuring that the women who have been associated with these spaces can also resist being subdued and controlled.” 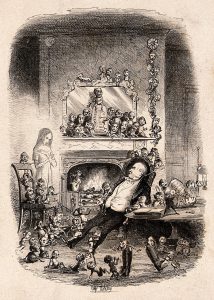 The ghost of a girl appearing to an old man surrounded by demons of conscience.

Christopher Partridge, a professor of religious studies at Lancaster University, explains to me why “homes are very particularly significant spaces for haunting”: they represent security and everything we hold dear. It’s significant that haunted-house stories are often about young families trying to settle into domesticity. The hauntings that challenge this domestic ideal reflect a growing social awareness that a nuclear family isn’t the all-important unit it once was.

In some ways, traditional haunted-house stories are quaint and comforting compared to stories where ghosts haunt a technology (like in ‘The Ring’, a 2002 film involving a haunted videotape) or something more amorphous.

As Junker explains, “Ghosts can follow, but houses are immobile, and therefore it is also reassuring that even if one space is toxic, that toxicity can’t spread. This is a reassuring fantasy about the world, because we know that pollutants and more literal toxicity is much more pervasive and difficult to control.” 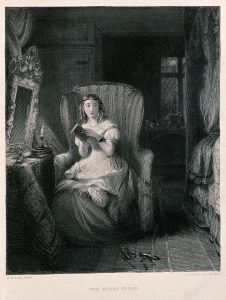 A young woman sitting at home reading a story that has made her nervous.

Even if what’s taken place in the home is tragic rather than evil, hauntings are a way of preserving those memories spatially. Haunted houses allow for restless bodies to be laid to rest, for evildoers to be exposed, and for the history of a house or family to come to light.

The stone tape theory, proposed in the 1970s, is a good example. This theory held that inanimate objects, like building materials, could essentially record murders and other tragic events. The idea that memory can be embedded into a house may be heartening when the human justice system fails.

Partridge notes that, in the past, “God would have rebalanced the order, brought order out of chaos.” Now, “culture tends to do that for us”, for instance through films that punish injustice through unquiet houses.

Junker adds that this idea is “pleasurable for the reader/viewer because it allows for a kind of justice, albeit supernatural and sometimes misguided justice. I think there’s something about haunted houses that reminds us that we can’t get away from the wrongs we commit, or our ancestors commit, that the past doesn’t just go away.” 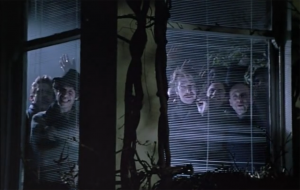 Still from the movie ‘Truly, Madly, Deeply’ (1990), directed by Anthony Minghella, in which a woman’s boyfriend comes back into her life after his own death.

French explains that haunted houses reinforce a common notion of the afterlife. This can be comforting: “We tend to think of ghosts as something scary, as something negative. But actually the evidence suggests that it’s very common for people, after they’ve suffered a bereavement, to have anomalistic experiences that suggest that person is around in some sense.”

This might not be a full-blown house haunting, but could be a strong sense of presence in a room, or a fleeting scent that serves as a reminder of the deceased. And people generally report those experiences as positive.

In general, French says, “We want to believe that there’s more order and meaning in the world than there actually is.” A haunted house is just one of the things that allows us to hold on to that belief.