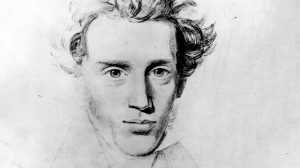 Born to a prosperous Danish family and educated at Copenhagen, Søren Kierkegaard deliberately fostered his public reputation as a frivolous, witty conversationalist while suffering privately from severe melancholy and depression. In a series of (mostly pseudonymous) books, Kierkegaard rebelled against the prevailing Hegelianism of his time and developed many themes that would later be associated with the philosophy of existentialism. Much of his work, including Frygt og Bæven: Dialectisk Lyrik (Fear and Trembling) (1843), Begrebet Angest (The Concept of Dread) (1844), (Purity of Heart is to Will One Thing) (1847), and Sygdomen Til Døden (The Sickness unto Death) (1849), expressed a profound interest in religious issues.

Kierkegaard also produced several more directly philosophical writings. Om Begrebet Ironi (The Concept of Irony) (1841) was his dissertation at the University of Copenhagen. Enten-Eller (Either-Or) (1843) provides an extended contrast between aesthetic and ethical ways of life, with emphasis on the ways in which radical human freedom inevitably leads to despair. The massiveAfsluttende Uvidenskabelig Efterskrift (Concluding Unscientific Postscript) (1846) describes a third way of life, the possibility of living by faith in the modern world by emphasizing the importance of the individual and developing a conception of subjective truth.

Kierkegaard’s influence on twentieth-century thought has been rich and varied. Most obviously, existentialist thinkers like Jaspers and Heidegger drew extensively on his analysis of despair and freedom. Although he directly addressed few of the social concerns that most interested his contemporary, Karl Marx, Kierkegaard has received ample attention from more recent Marxists, including Marcuse and Lukacs. Philosophers from Adorno to Wittgenstein have expressed great respect for the Danish master’s thought.

An entirely different kind of reaction against the severe rationalism of Hegel came from Danish philosopher Søren Kierkegaard. Although he wrote extensively, Kierkegaard employed the rhetorical device of irony so successfully that it is difficult to be sure what views he would have defended seriously. Approaching the work through some of his self-conscious reflections upon the task may prove helpful.

At first, one might be inclined to accept Kierkegaard’s straightforward declaration that his entire career as an author is nothing more than an earnest desire to achieve worldly fame. But even this appears in a work he published pseudonymously! Perhaps his claim to be preaching Christianity to the Christians is closer to the mark. Opposing the staid, traditional complacency in which many people live out their lives is a worthwhile goal that calls for an unusual approach.

Kierkegaard’s life and work exemplify the paradox that he saw at the heart of modern life. Ever scornful of human pretensions, he deliberately chose the reverse deception of pretending to be less than he was. Since serious work should stand on its own, without deriving any arbitrary force from the presumed authority of its creator, Kierkegaard wrote privately and published under a variety of pseudonyms while frequently making flighty public appearances in his native Copenhagen. Perhaps this was a great project of personal ironic exhibitionism: how better to illustrate the uselessness of customary “social” life than by living it out to the fullest?

But why would anyone take such great pains in a deliberate effort to be out-of-step with his own world? For Kierkegaard, this was the only way to be sure of the truth, by eliminating every possible ulterior motive for what one says. The pseudonymous writer is notably freed from any temptation to tailor his message to popular opinion, since it is impossible for him to achieve any fame. This is what mattered to Kierkegaard.

With regard to everything that counts in human life, including especially matters of ethical and religious concern, Kierkegaard held that the crowd is always wrong. Any appeal to the opinions of others is inherently false, since it involves an effort to avoid responsibility for the content and justification of my own convictions. Genuine action must always arise from the Individual, without any prospect of support or agreement from others. Thus, on Kierkegaard’s view, both self-denial and the self-realization to which it may lead require absolute and uncompromising independence from the group. Social institutions—embodying “the system” of Hegelian idealism—are invariably bad; only the solitary perception of self can be worthwhile.

Utter self-reliance, however, is a frightening prospect. Although we are strongly inclined to seek human freedom, Kierkegaard noted, contemplation of such a transcendence of all mental and bodily determinations tends only to produce grave anxiety in the individual person. Genuine innocence entails an inability to forsee all outcomes, which thereby renders one incapable of gaining control over one’s own life.

Thus, in Begrebet Angest (The Concept of Dread) (1844), Kierkegaard examined the only appropriate emotional response to the condition of human freedom. Anxiety (Ger. Angst) is the dizziness produced in any reasonable being who stands at the brink of genuine freedom. Knowing that we can think and do as we will naturally inspires deep fear about what we shall think and do.

Even religious verities, Kierkegaard supposed, offer no lasting relief from the predicament. Christianity (as Paul had pointed out) makes no sense; its genius lies not in any appeal to the dictates of reason but rather in its total reliance on faith. But from our point of view, the content of an authoritative command is entirely irrelevant; all that matters is the claim that the command places upon our lives. There can be no proof of the authority behind the command, since any such demonstration of its value would make it impossible for us to accept it as a matter of faith.

What is at stake here is Kierkegaard‘s theoretical distinction between objective and subjective truth, worked out in the Afsluttende Uvidenskabelig Efterskrift (Concluding Unscientific Postscript) (1846) to the Philosophical Fragments. Considered objectively, truth merely seeks attachment to the right object, correspondence with an independent reality. Considered subjectively, however, truth seeks achievement of the right attitude, an appropriate relation between object and knower. Thus, for example, although Christianity is objectively merely one of many available religions in the world, it subjectively demands our complete devotion.

For Kierkegaard, it is clearly subjective truth that counts in life. How we believe matters much more than what we believe, since the “passionate inwardness” of subjective adherence is the only way to deal with our anxiety. Passionate attachment to a palpable falsehood, Kierkegaard supposed, is preferable to detached conviction of the obvious truth. Mild acceptance of traditional, institutional religion is useless, since god’s existence can only be appreciated on wholly subjective grounds.

At one level, this amounts to acceptance of something like the slogan, “It doesn’t matter what you believe, so long as you’re sincere.” But of course the Kierkegaardian standards for sincerity are very high. 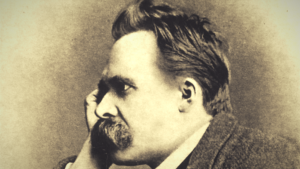 Born the son of a Lutheran pastor in Röcken, Saxony, Friedrich Nietzsche was raised by female relatives after his father’s death in 1849. He quickly abandoned his initial pursuit of theology in order to specialize in philology at Bonn and Leipzig, where he studied with Friedrich Ritschl. Nietzsche’s mastery of classical literature led to an early academic appointment at Basel and the publication of Die Geburt der Tragödie aus dem Geiste der Musik (The Birth of Tragedy) (1872), with its distinction between Apollonian and Dionysian cultures.

When ill health forced an early end to his teaching career, Nietzsche began to produce the less scholarly, quasi-philosophical, and anti-religious works for which he is now best known, including Menschliches, allzumenschliches (Human, All Too Human) (1878), Also Sprach Zarathustra (Thus Spoke Zarathustra) (1883), Die Fröhliche Wissenschaft (The Gay Science) (1882), and Jenseits von Gut und Böse (Beyond Good and Evil) (1886). Nietzsche never recovered from a serious physical and mental collapse he suffered in 1889; his Der Wille zur Macht (Will to Power) (1901) and the autobiographical Ecce Homo (Ecce Homo) (1908) were published posthumously.

Nietzsche sharply criticized the Greek tradition’s over-emphasis on reason in his Die Götzendämmerung (Twilight of the Idols) (1889).

Reliance on abstract concepts in a quest for absolute truth, he supposed, is merely a symptom of the degenerate personalities of philosophers like Socrates. From this Nietzsche concluded that traditional philosophy and religion are both erroneous and harmful for human life; they enervate and degrade our native capacity for achievement.

Progress beyond the stultifying influence of philosophy, then, requires a thorough “revaluation of values.” In Zur Geneologie der Moral (On the Genealogy of Morals) (1887) Nietzsche bitterly decried the slave morality enforced by social sanctions and religious guilt. Only rare, superior individuals—the noble ones, or Übermenschen—can rise above all moral distinctions to achieve a heroic life of truly human worth.

German philosopher Friedrich Nietzsche shared Kierkegaard‘s conviction that philosophy should deeply reflect the personal concerns of individual human beings. But for Nietzsche, this entailed rejection of traditional values, including the Christian religion. Nietzche’s declaration of “the death of god” draws attention to our culture’s general abandonment of any genuine commitment to the Christian faith.

According to Nietzsche’s Die Götzendämmerung (Twilight of the Idols) (1889), Western philosophers since Socrates represent a degeneration of the natural strengths of humanity. A noble taste for heroic styles of life can only be corrupted and undermined by the interminable debates of dialectical reason. Traditional Western morality philosophy—and the Christian religion in particular—therefore opposes a healthy life, trying vainly to escape unfortunate circumstances by destroying native human desires.

Only perverse tenacity and cowardice, he believed, encourages us to cling to this servile morality, It would be more brave, more honest, and much more noble to cut ourselves loose and dare to live in a world without God. In such a world, death is not to be feared, since it represents nothing more significant than the fitting conclusion of a life devoted to personal gain.

All of this is, of course, a variety of nihilism. Nietzsche insists that there are no rules for human life, no absolute values, no certainties on which to rely. If truth can be achieved at all, it can come only from an individual who purposefully disregards everything that is traditionally taken to be “important.” Such a super-human person {Ger. Übermensch}, Nietzsche supposed, can live an authentic and successful human life.

Beyond Good and Evil

Nietzsche offered a quasi-historical account of the harmful consequences of traditional ethics in Zur Geneologie der Moral (On the Genealogy of Morals) (1887). “Good” initially and properly designated only the right of those individuals with social and political power to live their lives by sheer force of will. But a “priestly” caste, motivated by their resentment of their natural superiors, generated a corrupt alternative that would appeal to “the herd” of less capable persons, turning values inside-out. In the “slave morality” endorsed by religious establishments, Nietzsche argued, forceful action which should be admired gets labelled as “evil,” while the cowardly tendency to think through everything in advance is transformed into the supposed virtue of prudence.

Genuine autonomy, Nietzsche maintained, could only mean freedom from all external constraints on one’s behavior. In this (natural and admirable) state of existence, each individual human being would live a life without the artificial limits of moral obligation. No other sanction on conduct would be necessary than the natural punishment involved in the victory of a superior person over a vanquished enemy.

But the wish of lesser people to secure themselves against interference from those who are better gives rise to a false sense of moral responsibility. The natural fear of being overwhelmed by a superior foe becomes internalized as the self-generated sense of guilt, and individual conscience places severe limits on the normal exercize of human desire. Thus, on Nietzsche’s view, the fundamental self-betrayal of the human race is to submit its freedom to the ficticious demands of an imaginary god. Afraid to live by the strength of our own wills, we invent religion as a way of generating and then explaining our perpetual sense of being downtrodden and defeated in life.