The practice of reclining to dine and drink spread throughout the Mediterranean. 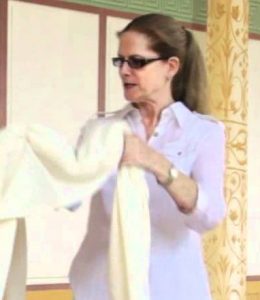 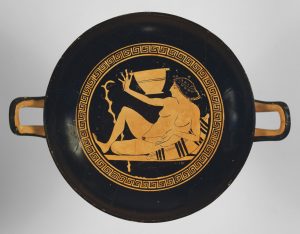 Elite Greeks and Romans reclined to dine, and ordinary people copied them when they could. Although the practice seems strange to us, it must have been both comfortable and convenient, since reclining during meals spread throughout the Mediterranean and survived for over a millennium!

At the Getty Villa we revived Greek and Roman practices of drinking and dining for a recent gallery course, which provided the opportunity to reenact (and, of course, photograph) ancient lounge-drinking practices. I’ll talk about Greek customs, moving to the Romans in a follow-up post.

Greek dining couches of the archaic and classical periods were intended for men and, sometimes, their female companions (courtesans or prostitutes—like the woman on the painted vase above—but not elite wives and daughters). The couches were “single beds” that could accommodate an additional person, especially during a symposion(symposium), the after-dinner male drinking party.

From seven to fifteen beds were arranged against the walls of the andron, the male dining room, each bed with its own little table and often a step stool. Rather than actually lying down, the men reclined on their left elbows and used their right hands to eat and drink. They propped themselves up quite high on pillows and kept their balance by bending their right knees and bracing them against the left (and probably by leaning against the wall, when necessary). This pose requires a flexible waist! 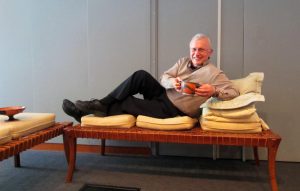 Getty Villa docent Don Peterson reclines on his left side, elbow raised on a stack of pillows, with his right knee bent. He holds a skyphos, a common stemless drinking cup.

After dinner, the drinking party began. Often high-toned symposiasts—Socrates, for example—held educational as well as convivial conversations; other times, the drinkers got down to partying ASAP.

If additional people joined the drinking party, they could be squeezed onto the couches. Since the room was designed for right-handed people, lefties had to accommodate to the layout, or turn and face the wall. 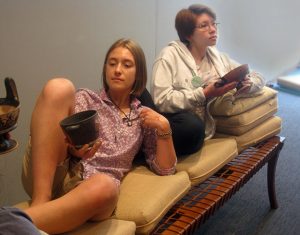 Latin students Petal Niles and Athena Schlereth squeeze onto one couch for a symposion. Athena (right) holds a kylix as she contemplates the philosophical discussion she intends to initiate; Petal (left) examines the image on her skyphos as she awaits the arrival of the wine-pouring slave.

The area in the middle of the Greek dining room was left open for serving food and drink, for entertainment, and for a stand to be placed during kottabos, a drinking game in which the drinker tossed the lees in his wine cup to knock something off the stand. Wine was not filtered and strained as it is today, and the dregs were left in the bottom of the cup. In this video I demo the basics.

The painting on the cup at the top of this post shows a naked slave woman playing kottabos, hooking her forefinger into one handle of her skyphos as she prepares to toss her wine dregs toward the stand in the middle of the room.

There won’t be any drinking games, but this Saturday, we’re offering another homage to ancient Greek drinking with a lecture and wine tasting celebrating the symposion that combines erudition and wine. Or try kottabos at your next dinner party, recreating the Greek dining couches with benches and lots of pillows.