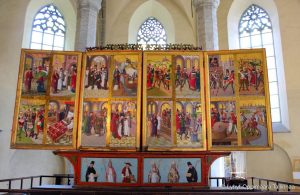 The key themes in Livonian history in the first half of the 16th century are the Reformation, relations with Russia in foreign policy and the activity of the Master of the Order, Wolter von Plettenberg, in domestic affairs.

At the beginning of the 16th century, complications within the Catholic church became more and more evident. Carried away by the religious boom of the Late Middle Ages, the church tried to found new religious institutions, but without any notable results. Around 1520, a Dominican monastery was planned in Narva, but the initial construction work was so much delayed that due to the Reformation, the monastery never really started functioning. During the first decade of the century, plans to build a Franciscan monastery in Tallinn were afoot, originating from the Harju-Viru knights; but the Tallinn town council opposed the idea, insisting instead on founding a St. Anna nunnery for the daughters of the burghers. In the end, nothing came of either plan. Some sources reveal the Tallinn people’s resentment of the Dominicans because of their excessive greed. The attitude towards monasteries elsewhere in the country is not known.

The Reformation, imported from Germany, reached Livonia fairly quickly — the first Lutheran preachers had already started work in the early 1520s; the whole process, however, took several decades to complete. By the second half of the century, the church administration was changed, but essential changes in religious principles were slow to spread and take root.

On the whole, the nobility and the Order supported Catholic institutions, whereas the towns favoured Lutheran preachers who started their regular activities in Tallinn and Tartu in 1523. Their agitation culminated in iconoclastic activities in the autumn of 1524 in Tallinn, and especially vigorously in Tartu in early 1525 where in addition to the parish churches and monasteries, the residences of the canons were also looted. Iconoclasms cannot be regarded as a serious expression of religious feelings, rather they provided an emotional outlet for the masses and the younger, more hot-tempered merchants (the Blackheads were ardent supporters of the Reformation, participating in iconoclastic activities, at least in Riga and Tartu). The ideological soil for the Reformation in Livonia was extremely weak and the main reasons for church changes were of economic nature.

After iconoclasms, church life in towns was gradually reorganised — the town council registered the church property, forced the monasteries and congregations to accept Lutheran preachers and altered the social welfare system. A relief fund for the poor (Gemeine Kasten) was established which was supposed to be funded by the earlier Catholic church revenues, e.g. the rents. For the time being, the Catholic bishops and canons remained in their posts, and Lutheran transformations did not at first reach the countryside. In Riga, Dominican and Franciscan monasteries were abolished, in Tallinn the Dominican and in Tartu the Dominican and Franciscan monasteries were closed down (such steps were more radical than in the Lutheran parts of Germany where many monasteries survived until the 18th–19th centuries). Other Livonian monasteries mostly survived until the Livonian war that broke out in the second half of the 16th century; the Tallinn Cistercian nunnery managed to stay open until the third decade of the 17th century.

In what way and how fast the Lutheran church established itself in the country cannot be closely followed. More extensive changes probably did not occur before the end of the century. Unlike in Germany, the Reformation caused no reaction amongst the Livonian peasantry. Elements of pagan-catholic syncretism doggedly survived in the beliefs of the peasants almost into the modern era. An important factor was the Livonian War (1558–1583) which destroyed the initial fragile structure of the Lutheran church in the country.

After the Reformation, the emphasis on the clergy learning the Estonian language might even have diminished, due to the expulsion of the old Catholic clergy and the activities of immigrant preachers. The newly arrived Lutheran clergy had no experience with the native people nor the requisite language skills. The first evidence of an Estonian publication dates from 1535; this is the surviving fragments of the Wanradt-Koell catechism with parallel Estonian and Middle Low German texts which cannot, however, be taken as proof of the increased role of the Estonian language in the church. The lack of earlier textual examples does not automatically mean the incompetent use of Estonian before the Reformation. The sermons were customarily written in Latin, but presented in a local language. The Wanradt–Koell catechism remains a solitary example; written Estonian texts began to spread more widely only in the 17th century.

Originally published by Estonica: Encyclopedia about Estonia under the terms of a Creative Commons Attribution-NonCommercial-ShareAlike 2.0 Generic license.