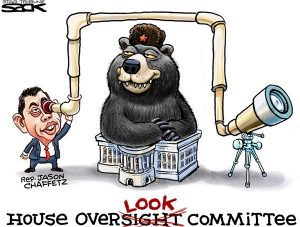 To best understand the Republican mentality on Capitol Hill – specifically, their disgraceful refusal to probe the Trump-Russia national security scandal with even a scintilla of the energy they devoted to Benghazi – you need only read what Senator Rand Paul said Tuesday on Fox News Radio.

“I just don’t think it’s useful to be doing investigation after investigation, particularly of your own party,” Paul said. “We’ll never even get started with doing the things we need to do like repealing Obamacare if we’re spending our whole time having Republicans investigate Republicans.”

There you have it, folks. Permit me to translate: “If we fully probe deeply for anti-American treason, we won’t have time to strip Americans of their health care.”

Remember when Republicans wrapped themselves in the flag and fancied themselves to be our truest patriots? That was their brand for decades. But these days, the Trump armband is wound so tight that it’s cutting off oxygen to their brains.

Republicans have their priorities. The party, and its dream of shredding the safety net, totally comes first. The country, despite ever-mounting evidence that Team Trump was in bed with a foreign adversary, decidedly comes second.

The latest news – and I know, it’s tough to keep up – is that Trump campaign officials and Trump associates had “repeated contacts” with Russia in 2016, during the same time frame that Russia was actively working to get Trump elected. There’s no evidence in this new report that Trump’s people participated in the anti-Hillary hacking or that they were apprised of Putin’s cyber-invasion. But it’s suspicious that in December, on the same day President Obama punished Russia with sanctions, Michael Flynn called Russia five times in an attempt to undermine America’s sanctions. Was he sending Russia a thank-you note for the election help? Is it rational to believe that he called so many times on his own, without a directive from Trump or other higher-ups?

All this smoke – wait, here’s even more – suggests a serious Trumpster fire. All these unconnected dots are clearly sufficient impetus for a thorough independent probe. But somehow (and I know this is hard to believe), Republicans have lost the investigative zeal they exuded during the Obama era.

Jason Chaffetz, the Utah congressman who helms the House Oversight Committee, was all geared up last year to deep-dive into Hillary Clinton’s private server – vowing to soldier on even if she became president. He churned out more than 70 letters and subpoenas about that allegedly dire threat to national security. But when asked yesterday about Trump and Russia, Chaffetz took refuge in Michael Flynn’s resignation: “I think the situation has taken care of itself.”

Right. As if that’s the end of the story. Those of us who lived through Watergate know that the scandal didn’t end when Jeb Magruder and John Mitchell quit their jobs.

Congressional Republicans probably know this, but they’re willing to indulge Trump’s tumultuous idiocy in exchange for his signature on long-sought right-wing legislation. And there’s another big reason for their refusal to provide oversight: Many are terrified of being primaried in 2018 by Trumpy challengers. In fact, the Republican base remains inexplicably in thrall to Trump.

According to a late-January Qunnipiac poll, 62 percent of Americans – including 66 percent of independents – want Congress to “investigate potential links between Trump’s campaign advisers and the Russian government.” Probe support among grassroots Republicans is a mere 28 percent.

Somehow it feels like the Russian cyber-invasion – and what Trump and his people might’ve known and when they knew it – rates at least a fraction of all that investigatory attention. Lindsey Graham, at least, is willing to openly state the obvious: “If there’s contacts between the Trump campaign and Russian intelligence officials outside the norm, that’s not only big-league bad, that’s a game changer.”

And I’ll put it in Trump language: Congress needs to extreme-vet this regime until we can figure out what the hell is going on.