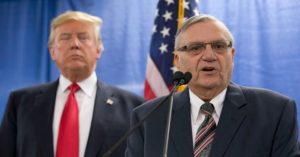 Right-wing sheriff, up for re-election, promises to deploy deputies on Election Day—heightening fears of voter intimidation in Arizona

Voting rights defenders in Arizona are expressing fear and concern that right-wing Sheriff Joe Arpaio, who was found in contempt of court in May and again last month for failing to stop his practice of racial profiling and targeting of Hispanic people in “immigration patrols,” will intimidate voters at the polls on Tuesday.

Those fears arose after Arpaio, who is up for re-election and faces a strong challenge from Democratic candidate Paul Penzone, instructed election recorder Helen Purcell to have poll workers call his office directly in case of a “non-life threatening emergency” on Election Day, the Guardian reports, and also told local principals whose schools were functioning as polling places that Arpaio’s deputies would be “stationed around the valley for easy dispatch should there be any need for an officer.”

“The presence of Arpaio’s deputies would be intimidation,” Samantha Pstross, president of the Arizona Commission for Election Accountability, a coalition of non-partisan voting rights groups, told the Guardian. “They consistently treat voters differently based on the color of their skin, so why would they do any differently on election day, especially given that their boss is running for re-election?”

“This is a recipe for disaster,” Pstross said.

The instruction for poll workers to have an Arpaio deputy deployed in case of emergency does indeed appear unusual, as a recent poll worker guide for another well-populated county in Arizona instead directs workers to simply call 911—and makes no mention of the local sheriff.

And at least one Maricopa County official has responded to Arpaio’s comments by writing to Purcell “asking her to reconsider her decision to call on sheriff’s deputies,” the Guardian reports:

“Neither the sheriff nor his office has a good relationship with segments of our communities and voters,” the letter [from the supervisor of county affairs] says. “It is unfortunate, but the reality of using Maricopa County deputies when the sheriff himself is in a very contentious re-election race and given his proven actions against citizens’ rights may be perceived as voter intimidation.”

Indeed, Arpaio “is hated and feared by the Latino community here,” Pstross told the Guardian. “Especially hated, which is why the very presence of a sheriff’s deputy in a high-Latino population neighborhood will cause problems on election day.”

Local rights advocates have also been calling on Purcell to refrain from calling Arpaio’s deputies on Election Day:

Fear of intimidation from Arpaio’s deputies was particularly heightened after Republican presidential nominee Donald Trump’s repeated comments directing his supporters “to act as poll watchers, particularly in areas with large African American or other minority populations,” as the Guardian observes.

In addition, “[c]oncerns about intimidation by poll-watchers were elevated Saturday, when a federal court declined to put a halt to plans by Trump’s campaign, the Arizona GOP, and a group run by Trump ally Roger Stone to patrol minority-heavy precincts, film those who they suspect of voter fraud, and question people exiting the polls about which candidate they supported,” reported Alice Ollstein in ThinkProgress.

Amid such setbacks, Arizona voting rights advocates are also reeling from the Supreme Court’s reinstatement Saturday of an Arizona law that makes it a felony to collect and deliver early ballots, a decision that rights activists say is “a step back in democracy.”

And early voting in Arizona has already been called a “fiasco” by some observers, with hours-long lines forming days before Election Day—a situation that Sen. Bernie Sanders (I-Vt.) called “a disgrace.” Arizona, and Maricopa County in particular, was the site of a chaotic Democratic primary that the mayor of Phoenix decried as “unacceptable.”

As the first presidential election since the Supreme Court’s gutting of the Voting Rights Act looms, voting rights activists in Arizona fear the right to vote is already under siege.