“We will lose much of the record of the last several thousand years of human occupation in coastal areas.”

Extreme weather events powered by climate change already have shown how rising seas threaten coastal communities: flooding and destruction of homes followed by widespread migration and resettlement. That’s horrible enough. But sobering new research suggests that many iconic symbols of the nation’s history also could be wiped out by rising waters.

An estimated 13,000 archeological and historic sites, cemeteries and landscapes on the Atlantic and Gulf coasts of the southeastern United States, including places where Native Americans, early settlers, enslaved — and later freed — people lived, could be submerged in the next century, as well as more than 1,000 sites listed in the National Register of Historic Places, according to the study published in the journal PLOS ONE.

Structures in such cities as Charleston, S.C. and St. Augustine, Fla., as well as Jamestown, Va. — the first permanent English settlement in the Americas — the Kennedy Space Center, and even the recently relocated Cape Hatteras Lighthouse, could be threatened by relatively minor increases in sea level of 1 to 3 meters, according to researchers. Moreover, should the sea rise to 5 meters, the number would increase to an estimated 32,000 properties, in addition to 2,400 in the national register, the study said. Also, many more as yet unrecorded sites could disappear. 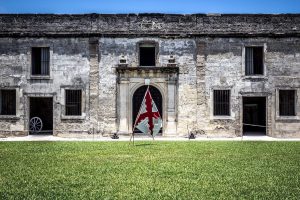 “[We] are concerned with understanding and preserving the past,” said David G. Anderson, professor of anthropology at the University of Tennessee, Knoxville, and the study’s lead author. “The way things are going, we will lose much of the record of the last several thousand years of human occupation in coastal areas globally, where a great deal of history and settlement has occurred, and where many people live today.”

Scientific evidence indicates that the seas will rise at least 1 meter over the next century, and as much as 5 meters or more in the centuries that follow, if current trends continue. More than 40 percent of the world’s people live within 100 kilometers of a coastline.

“The tragic cost of sea-level rise will be felt most in the displacement and suffering of millions of people, rather than the loss of any one place,” said Joshua J. Wells, a co-author and professor of anthropology at Indiana University. “Similarly, the loss of archaeological sites will equate to a drowning of libraries full of information [of] over 15,000 years of human lives, including patterns of social and cultural change, artwork, demography, health, religion and — a bitter irony — lessons about past human experiences with climate change.”

The scientists analyzed data from the Digital Index of North American Archaeology (DINAA), which compiles information developed over the past century from numerous sources. They calculated the number of sites that would be submerged by determining the elevation above mean sea level for all of the sites in DINAA, and from other databases such as the National Register of Historic Places. The work spans the area from Maryland to the Texas-Louisiana border. 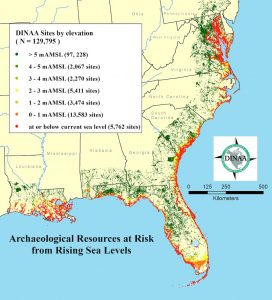 Tens of thousands of known archaeological sites are threatened by sea-level rise in the southeast. Source: PLOS ONE.’

“What makes our study unique is that it encompasses all of the archaeological sites recorded in the states participating [in DINAA],” Anderson said. “Analyses of that scale have rarely been conducted. More typically, they are done at the park, installation or state level. What was surprising was the vast numbers of archaeological sites that are threatened when the data are examined collectively.”

The rate at which historic archaeological sites and properties will be lost depends on how quickly sea level rises, Anderson said. The best estimates are for a 1 meter increase this century, “but that could change dramatically,” he said. “Lower lying sites will be submerged first and would also be more vulnerable to storm surge and other damage, depending on local conditions.”

Archeology has long been trying to integrate information about historic properties at large scales, but the field only recently developed programming and computer capability to gather vast amounts of data and display them easily and effectively, Anderson said. 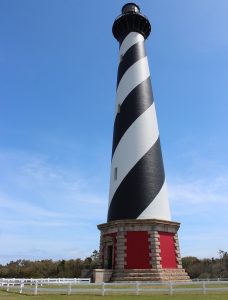 The DINAA project was “an idea long imagined but only now becoming possible,” he said. “It is appearing at a time when such information is critically needed to help deal with a crisis to our collective heritage. The cooperation of large numbers of people and organizations is needed if we are to protect our history.”

It is also important that citizens themselves come to appreciate the trove of important historic knowledge inherent in the endangered sites. “You need to know about something to care about it, and right now very few people know about the depth and richness of the archeological record that surrounds them,” said Eric C. Kansa, a study co-author and director of Open Context, an archeology data base.

“When people lose their homes in some sort of disaster, it’s not just the loss of property that matters,” Kansa added. “The loss of all the photo albums, books and objects handed down across the generations represents a real and profound emotional blow. These are the things that help shape our identity and give meaning to our lives. Entire landscapes — full of archeological and historical sites — matter in a similar way.”

Originally published by NexusMedia under the terms of a Creative Commons’ Attribution-NoDerivs 3.0 Unported license.