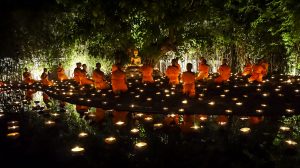 Rituals, as important elements of human life, have been a significant aspect of Buddhist practice since the time of the Buddha. Rituals are a form of language that expresses many dimensions of our human condition, including our relationships to others and to our spiritual life. As actions done with others to share our common values, rituals help create community and mutual support. As a way of being mindful, they can bring a heightened awareness to aspects of our experience needing attention. Rituals often involve symbolism and speak to our subconscious.  And when they are repeated frequently, they shape our dispositions.  When done whole-heartedly, they help us discover and express some of our deepest feelings and aspirations.

Rituals share many characteristics with poetry, theater, and dance in evoking emotions, intuition, and new perspectives. Because rituals touch more aspects of our mind/heart than simple prose and didactic explanations, rituals, like the arts, can enrich our lives and engage the full range of our being.

Rituals have much in common with prayer, including how they impact participants. This connection is not surprising when prayer understood as ritualized speech.

Rituals can strengthen and highlight the values, intentions, and experiences we have chosen to live by. This is particularly useful when other concerns cause us to forget or relinquish what is important to us. At major life transitions people often mark the new direction with a ritual, sometimes accompanied with vows as in wedding or ordination vows.

Some rituals are journeys that have a beginning, middle and end.  They are journeys in which participants undergo a number of possible changes, the most common being an entry into a special, sometimes sacred, location and time and then return to one’s ordinary life. 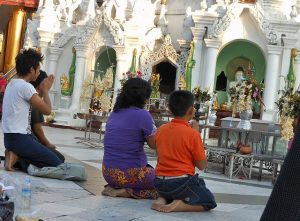 At times rituals can be transformative. The combination of setting an intention, heightened focus, emotional involvement, and embodied participation can enhance the effect rituals have. They can affirm what we know is true. They can translate what we understand into how we live, what we know into who we are. At times they can help people heal, develop, and complete psychological and spiritual processes better than any other method.  This is particularly true in times of crises.

An interesting way of appreciating the value of ritual is to observe how they can help children feel safe and cared for. Daily rituals give a sense of familiarity and regularity in a life that a young child may feel is confusing and rapidly changing.  Marking a significant change with a ritual can ease the transition and reassure the child of their connection to their family.  This can be as simple as having a “cookie party” to mark the first day of kindergarten.

Often enough Western Buddhists have seen rituals as superficial and as a distraction from the “real” work of practice.  This view overlooks the way in which rituals are a practice as much as meditation.  In the past and in the present, there are many Buddhists for whom ritual practices have been their primary way of inner transformation. For example, as one of the most common Buddhist rituals, bowing can be powerful and evoke and strengthen a person’s reverence, gratitude, humility, and ability to let go of self-centeredness.

Some English translations of the Buddha’s teachings list ‘adherence to rites and rituals’ as an attachment one must overcome.  This has led some Buddhist to reject all ritual.  But the Buddha’s concern was the attachment not the rituals.  Furthermore, the appropriate and literal translation into English is ‘adherence to precepts and religious observance’ – a much broader category than ‘rites and rituals’.  As important as precepts and religious observances are in Buddhism, they alone cannot liberate people.  To rely on them for liberation is a hindrance to liberation.  But precepts, religious observances and rituals can have an important role for other purposes. Not least of these is preparing the ground for the deep letting go which is what is required for liberation.

Therefore, one of the important functions of Buddhist rituals is to strengthen people’s connection to the Dharma and to the intention, respect, understanding, community, and experiential dimension associated with the Dharma.  While feeling a stronger connection to the Dharma can be meaningful in and of itself, it can also fuel a person’s practice when it is challenging to do. 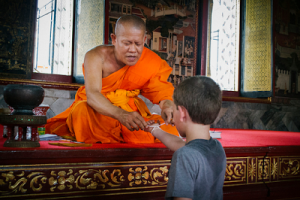 Sai sin is a short sacred string. Theravada Buddhist monastics in Asia bless a length of thread in a chanting ceremony.  They then tie them around the wrist of laypersons in the temple or on other solemn occasions.  The string gives the bearer good fortune, people say, or serve as protection by reminding people of the Dharma and other Buddhist blessings.  Tyler King caught this interaction between one of the resident Thai monks at Wat Pho temple and a Western boy, who must have wondered, “Are you the Buddha?” as he approached. / Tyler King, Wisdom Quarterly

The Grammar and Vocabulary of Ritual

Rituals are most effective when the person(s) creating or officiating them does so whole-heartedly.  To lead or participate with hesitation or reluctance diminishes a ritual’s power. In order to better engage in a ritual it is helpful to know their most common structure and elements.  By knowing a structure, one can more easily create new, perhaps impromptu, rituals by bringing into the structure some of the many possible elements.  In a sense, the structure of ritual is its grammar and what fills the structure is the vocabulary.  The bigger one’s ritual vocabulary, the more one can accomplish through ritual.

Rituals involving a single activity like a bow or a blessing do not have a temporal structure.  It is the rituals that take participants on a journey which have structure. The simplest way of understanding the structure is dividing it up into a beginning, middle, and an ending.  Each of these three phases has it’s own function.  The notes that follow are mostly meant to help someone create new or impromptu rituals.

The Beginning of a Ritual:

The beginning sets the stage for the middle.  Its primary function is to differentiate the ritual activity from the participants’ ordinary activities and concerns.  This creates a focus and a context for the main body of the ritual.

Sometimes this is accomplished by going to a special place such as a temple. Sometimes it is achieved by demarking a special, perhaps sacred, place and time.  For an impromptu ritual this can be done quickly by having the participants form a circle.  A meaningful, sacred object could be placed in the middle of the circle or in a prominent place.  Other things that can contribute to creating a focused environment is sprinkling the space with water, burning incense, or lighting a candle.  In some rituals the participants clearly let go of activities and identities associated with daily life.  This can be as simple as putting down anything people are holding or taking off their shoes.  In some ceremonies a period of silence, meditation, or time alone helps give power to the next phase of the ritual.

Often the beginning of a ritual involves saying something that sets the intention and context for the ritual.  This can be stories or descriptions of what is left behind, what the focus of the ritual is about, or what the intention is going to be.  Sometimes participants are quiet while an officiant does all the speaking; sometimes participants are asked simple questions that prepare them for what is going to happen next such as “Are you ready?” or “Are you ready to do (X)?”

The Middle of a Ritual 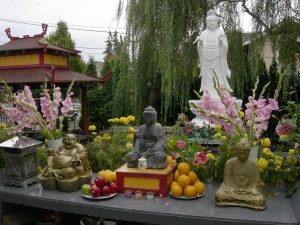 The middle part of a ritual is sometimes referred to as a period of transition.  It is a transition between leaving one’s ordinary life and then returning.  Sometimes it is a period between leaving one identity or way of being and starting a new one.  It can be seen as blank slate ready for something new.  It is time when participants are open and willing to hear or do something different.

The middle phase is when the main purpose of the ritual is enacted or evoked.  The purpose can be to:

The Ending of a Ritual

Once the main intention of a ritual is finished, it is useful to have a time focused on bringing it to a close and helping the participants to integrate the ritual activity back into the life they left behind.  The ending is a time to restate or appreciate the intention of the ritual and explicitly connect it to the life one is returning to.  An object associated with the ritual and its purpose can be given to the participants to accompany them back into their life and serve as a reminder.

The most common Buddhist element at the end of a ritual is the dedication of merit.  For people who don’t think in terms of merit, this can be understood as a stated aspiration that the benefits of the rituals be shared with others.  The ending is also a time to offer appreciation for the ritual and acknowledge the people involved.