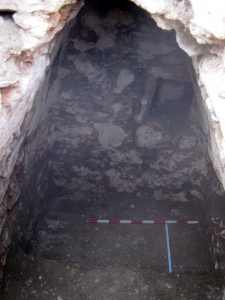 The Roman Era Getae-Dacian tomb discovered near Velikovo in Northeast Bulgaria had been exposed and looted by treasure hunters before the archaeologists made their way to it. Photo: General Toshevo Municipality

The discovery has been made in rescue excavations by archaeologists from the Dobrich Regional Museum of History, with Boyan Totev as lead archaeologist, and Dobri Dobrev as his deputy.

The rescue digs have been undertaken following a brutal treasure hunting raid which had damaged and exposed the tomb, General Toshevo Municipality has announced.

The region around the town of Velikovo is known for numerousnecropolises from the Roman Era.

“The combination of rich [funeral] inventories and massive funeral facilities speaks of a specific funeral rite is connected with the local Getae-Dacian population. Indeed, the provincial Roman culture in this part of [the geographic region of] Dobrudzha was distinct in its richness and diversity,”the archaeologists explain.

The Getae, or Gets, were Thracian tribes inhabiting the regions on both sides of the Lower Danube in today’s Northern Bulgaria and Southern Romania. They established one of the two most important Ancient Thracian kingdoms, the other being the Odrysian Kingdom with its center in the Kazanlak Valley in Central Bulgaria, and capital inSeuthopolis (whose ruins today lie submerged on the bottom of a Communist Era water reservoir).

The Kingdom of the Getae was centered in what is today the enormous Sboryanovo Archaeological Complex, with their capital in the ancient city of Dausdava, the Wolf City. The Getae and the Dacians are believed to have been the one and the same group of Thracian tribes (or very closely related), which is why they are often referred to as Getae-Dacians.

In 46 AD, the Roman Empire completed the conquest of all of Ancient Thrace south of the Danube, with the Thraciansgradually becoming integrated into the Roman society.

The Thracian (Getian / Dacian) regions north of the Lower Danube were conquered by the Romans under Emperor Trajan (r. 98-117 AD) in 106 AD, and were lost in 271 AD, while the rest of Ancient Thrace, south of the Danube,remained part of the Roman Empire and later the Eastern Roman Empire (Byzantium) up until the establishment of the First Bulgarian Empire (632/680-1018) south of the Danube in 680-681 AD. 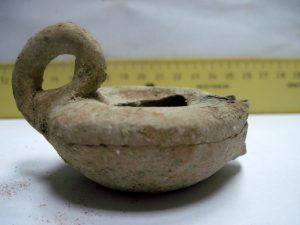 This clay lamp is one of the few ancient artifacts from the tomb inventory left behind by the treasure hunters. Photo: General Toshevo Municipality

The newly discovered Roman Era family tomb near Bulgaria’s Velikovo has a trapezoid shape, and is oriented according to the four cardinal directions.

It was built of local roughly processed stones plastered with white mortar. The tomb’s entrance looks to the east, and was covered with stone slabs.

Inside the tomb, to the right, the archaeologists found a stone niche which must have contained an urn withcremated human remains. Before the niche, there is space for funeral gifts.

To the north of that, there is a terraced funeral bed where thearchaeologists have discovered scattered human bones.

They have found evidence that this was a Roman Era family tomb which contained several funerals which were performed at different times, using different methods – either bycremation (corpse burning), or by laying the corpse on thefuneral bed.

“The [tomb] resembled a house – a final home for the deceased. Inside it were placed numerous funeral gifts designed to be used by the buried in their afterlife. Unfortunately, they have been looted by the treasure hunters who penetrated and violated the funeral complex which had been preserved for nearly 2,000 years,” thearchaeologists have explained.

Two of the remaining artifacts which have been found inside the tomb by the researchers are a shallow bowl and aclay lamp. 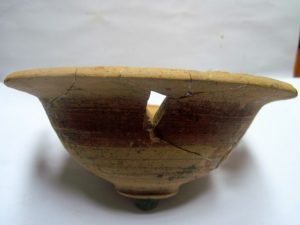 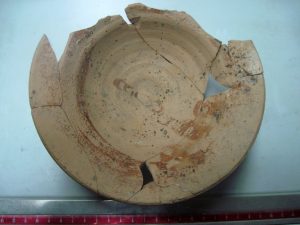 The Ancient Thracians were an ethno-cultural group of Indo-European tribes inhabiting much of Southeast Europefrom about the middle of the second millennium BC to about the 6th century AD on the territory of modern-day Bulgaria, Romania, Moldova, Greece, Turkey, Macedonia, Serbia.

The Getae or Gets were Thracian tribes inhabiting the regions on both sides of the Lower Danube in today’s Northern Bulgaria and Southern Romania.