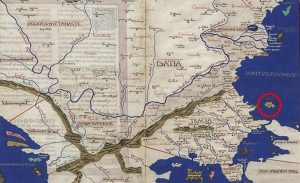 Location of the sunken island of Cyanida / Kianida on Ptolemy’s 9th European Map (Nona Europae Tabula) published in the Reichenbach Monastery in 1467. The sizable island was likely located off the coast of the spot of today’s Black Sea border of Bulgaria and Turkey. Map: Wikipedia, National Library in Warsaw, Poland

A sizable but now destroyed and/or sunken island – likely the size of Greece’s Aegean island of Thasos.

A sizable but now destroyed and/or sunken island – likely the size of Greece’s Aegean island of Thasos – existed in the Black Sea off the southern Black Sea coast of today’s Bulgaria but disappeared as a result of natural calamity sometime in the Middle Ages, a report points out.

The island in question was called Cyanida (or Kianida), and is featured on maps from the 15th century based on “Geography” (also known as “Geographia” or the “Cosmographia”), a work written ca. 150 AD by 2nd century AD Greco-Roman geographer Claudius Ptolemy.

These include maps published in 1467 in the Reichenbach Monastery (today in Southern Germany) such as Ptolemy’s 9th European Map (Nona Europae Tabula) (featuring Dacia (Datia), Thrace (Thracia), and Upper and Lower Moesia) and Ptolemy’s 1st Asian Map (Tabula Asiae I), depicting Asia Minor / Anatolia. (The maps in question are part of the collection of the National Library in Warsaw, Poland.)

In a paper published in 1982, Bulgarian geomorphologist Dinyo Kanev (1922 – 1997), a professor of geomorphology and cartography at Sofia University “St. Kliment Ohridski”, reveals geomorphic evidence about a sunken island located some 4 – 5 kilometers off the coast of the Black Sea near the spot of today’s border between Bulgaria and Turkey, close to Bulgaria’s Rezovo and Turkey’s Igneada.

In 1983, Bulgaria’s then most popular magazine about popular science, “Cosmos”, published an article entitled, “Cyanida (Kianida) – the Missing Island in the Black Sea”.

Since the Cyanida / Kianida island off Bulgaria’s coast in the Black Sea does not appear on maps after the 15th century, the conclusion is that it sank at least 500 years ago, writes “168 Chasa“, a Bulgarian weekly, in a report reminding the story of the missing island, and quoting the works of geomorphologist Prof. Dinyo Kanev.

It has been hypothesized that the size of the sunken Black Sea island off the coast of Southeast Bulgaria might have been about the size of the island of Thasos, Greece, in the Aegean size – which is approximately 380 square kilometers making it Greece’s 12th largest island. 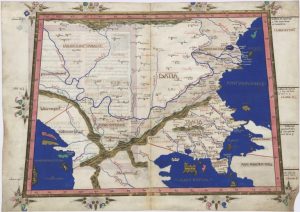 Location of the sunken island of Cyanida / Kianida on Ptolemy’s 9th European Map (Nona Europae Tabula) published in the Reichenbach Monastery in 1467. The sizable island was likely located off the coast of the spot of today’s Black Sea border of Bulgaria and Turkey. Map: Wikipedia 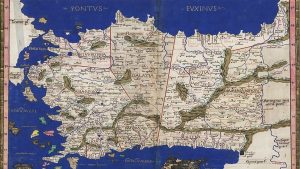 The topic is especially intriguing since Bulgaria has only several tiny islands off its coast in the Black Sea but they are very rich in terms of their archaeology and history heritage, the most notable example being the St. Anastasia Islandnear Burgas with its late medieval monastery, and especially the St. Ivan Island off the coast of Sozopol, which is known for its Early Christian / Early Byzantine monastery where in 2010 relics of St. John the Baptists were discovered.

“The examination of the coastal area and its underwater relief established that [the line connecting the points of the same depth on the map] of a depth of 20 meters continues about 5 – 6 kilometers off the coast [into the Black Sea],” Prof. Kanev wrote back in 1982.

“Before the Cape of Igneada (located right south of the Bulgarian – Turkish border – editor’s note), this line goes as far as 10 kilometers into the sea. Before the cape itself, some 4 – 5 kilometers off the coast, there is a large shoal with underwater rocks, probably remnants from a destroyed island,” the geomorphologist elaborated.

He noted that the space between the coast and the rocks in question was filled up with sand, a sand strip continuing up Bulgaria’s Black Sea coast. Parallel to it runs another shoal, and the another “sand wall”.

The two underwater “sand walls”, or sand strips running parallel to Bulgaria’s Black Sea coast are seen as resulting from both tectonic movements and sea currents.

The western Black Sea coast is dominated by northeastern winds but part of them, upon reaching the coast, result in currents running from south to north. This causes sands on beaches along the Bulgarians coasts to “move” northwards, and all the mouths of the rivers in Southeast Bulgaria flowing into the Black Sea are also slightly diverted to the north.

The mysterious disappearing of the missing Black Sea island of Cyanida / Kianida might have much to do precisely with this phenomenon, according to Kanev, i.e. the island was likely continuously eroded by breaking waves resulting from the south to north currents in the southwestern part of the Black Sea.

Judging from the works of Claudius Ptolemy and the respective maps published in the second half of the 15thcentury, as late as 1490, the sunken island of Cyanida / Kianida in the Black Sea was approximately located halfway between the Ancient Greek colony of Apollonia Pontica, today’s Bulgarian town of Sozopol, and the city of Constantinople, capital of the Roman Empire and the Eastern Roman (Byzantine) Empire, and respectively, the Bosphorus Straits, the “entrance” of the Black Sea.

The now destroyed island was likely the first sight of land for many of the naval vessels venturing north into the Black Sea during the Antiquity, for example, from the Bosphorus or Constantinople towards the mouth of the Danube River or towards the Crimean (Taurica) Peninsula, which were among the most popular naval commercialand military destinations.

According to some hypotheses, the sunken island of Cyanida / Kianida off Southeast Bulgaria’s coast could be associated with the Cyanean Rocks (the Symplegades).

According to Greek mythology, and especially the myth about Jason and the Argonauts and their quest to find the Golden Fleece in Colchis (the lands of today’s Georgia), those were a pair of rocks at the Bosphorus Straits clashing together when someone went through.

Thracian King Phineus told the Argonauts to set free a dove in order to be able to pass through the Cyanean Rocks (the Symplegades).

(The myth about Jason and the Argonauts, including the passing of the Cyanean Rocks (the Symplegades) has been explored in a recent exhibition of Ancient Thracian and Greek silver and gold artifacts in Bulgaria’s capital Sofia. 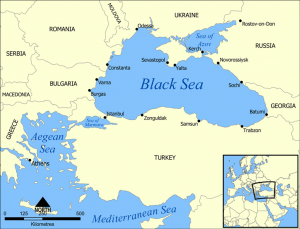 The Black Sea has very few islands compared to the Aegean Sea in the southwest, and those are usually tiny. Map: Wikipedia

Ancient Greek philosopher Sophocles mentions the Cyanean Rocks (the Symplegades) as rocks near the shores of the Bosphorus Straits, near Medea, today’s Kiyikoy, on the Black Sea coast of European Turkey.

Ancient Greek geographer Herodotus, in his account of the campaign of Persian Emperor Darius I (r. 522 – 486 BC), mentions the Cyanean Rocks as being located north of the Bosphorus, i.e. in the Black Sea.

The question about the location of the sunken island of Cyanida / Kianida also depends on determining the location of the cape of Tineada mentioned in ancient geographers’ works, as the island is supposed to have been situated roughly across from it.

“In the descriptions of the ancient authors, Cyanida’s location is defined in relation to those of the then existing settlements,” Kanev wrote back in 1982.

“Cyanida / Kianida lied between the town of Apollonia and the Bosphorus, before the cape of Tineada. Tineada was the cape on this part of coast which reached furthest into the sea. In reality, there are several capes sticking into the sea, and forming small peninsula south of Apollonia (today’s Sozopol). These are Bozhaka, Maslen Nos (“Oily Cape”), and Igneada. Maslen Nos is the largest of them, and its contours seem to resemble those of Cape Tineada as it was described by Ptolemy. Therefore, Tineada could also be Maslen Nos. That is why in order to specify more correctly the location of the Cape of Tineada, I tracked on the map the ancient settlements which lied near it, and were described by the ancient authors,” the geomorphologist elaborated.

After considering the various possibilities, Kanev eventually concluded that the cape of Maslen Nos was the location of an ancient city called Tonzos, which figures in the maps based on Ptolemy’s works, and therefore the Cape of Tineada itself was located further south, and was most probably the cape of today’s town of Igneada near the Bulgarian – Turkish border.

If true, the story about the natural destruction and/or sinking of the missing island of Cyanida / Kianida off Bulgaria’s Black Sea coast would be just one out of a number of stories about catastrophic calamities in the Black Sea, especially its western, that is, Bulgarian, coast which have resulted in the collapse and/or complete of partial submerging or sinking of coastal territories with ancient ports, fortresses, and cities.

That is not even keeping in mind the persisting myths about a Black Sea deluge which connected what once was a giant fresh water lake with the world ocean (and for which the large-scale Black Sea M.A.P. expedition has found no evidence).

Among those ancient Black Sea coast settlements that were destroyed as a result of a natural calamity figures the ancient and medieval Black Sea city of Byzone, the predecessor of today’s town of Kavarna in Northeast Bulgaria, also known as Karnava in the Middle Ages.

Byzone (Bizone) was an Ancient Thracian, Greek, Roman, and Byzantine port and fortress, later the medieval Bulgarian city of Karnava (Kavarna) located on the Black Sea Cape Chirakman, also called Ognen Nos (“Fiery Cape”), close to the Kaliakra Cape Fortress (Tirizis, Acra – not to be confused with Acra / Akin in the south).

The ancient and medieval city on Cape Chirakman in Bulgaria’s Kavarna is notable because in the second half of the 1st century BC, a major earthquake caused the front part of the cape to “break off” and collapse into the Black Sea, bringing down much of Byzone, including what may have been the city’s richest quarter.

What is more, judging from finds from the Roman period, underwater archaeology researchers have found evidence that the city may have “collapsed further” into the Black Sea a second time, in the 2nd century AD.

Another case in hand is the mysterious Black Sea fortress Akra (or Acra), also known as Akin, located on the St. Nikola Peninsula near today’s town of Chernomorets, Sozopol Municipality, in Southeast Bulgaria. About a third of it have been discovered to have sunk in the Black Sea. 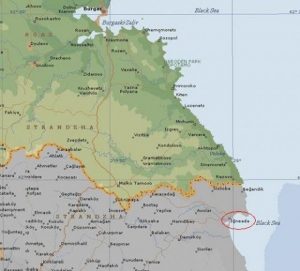 Submerged ancient settlements have also been identified near the fishing port of the Black Sea city of Burgas, on the Atiya Peninsula, near Sozopol, near Primorsko, on the Urdoviza (or Urdovisa) Peninsula near the town of Kiten, near Ahtopol, and at the mouth of the Ropotamo River.

On the other hand, there are indications that some of the modern-day towns along Bulgaria’s southern Black Sea coast may once have been islands but have been connected to the mainland as a result of natural forces and/or human activity.

The most notable cases of those appear to be the historical Old Town of today’s town of Nessebar (ancient Messembria), and the St. Cyricus (St. Kirik) Island (also known as the Sts. Quriaqos and Julietta Island), with an area of 0.08 square km (80 decares or 32 acres) which is today a peninsula connected with a breakwater and a road to Sozopol and the mainland.

In this regard, the destruction and/or sinking of the supposed Cyanida / Kianida island off Southeast Bulgaria’s coast would not have been something strikingly irregular.

However, the story about the sunken island of Cyandia / Kianida – referred to by some as Atlantis of the Black Sea – which has last appeared on maps from the 15th century, does stand out because of the major size of the island, which would have been odd in the Black Sea where there are only a few islands, they are very close to the coast, and are much smaller.