Women shipfitters working on board the USS Nereus at the U.S. Navy Yard in Mare Island, circa 1943. Department of Defense

Perhaps most important were the jobs. They attracted people to the Pacific Coast’s new airplane factories and shipyards. The Japanese attack on Pearl Harbor in December 1941 led to an intensified war effort, and more Americans sought ways to demonstrate patriotism while also taking advantage of new employment opportunities. People from economically downtrodden regions began flooding into California en masse – where nearly 10 percent of all federal government expenditures during the war were spent.

Following wartime opportunities west, “Rosie the Riveters” found more than just jobs, though, when they reached the Golden State. And at the war’s conclusion, each had to decide whether her own version of the California dream had been temporary or something more durable.

Moving on to another life

Moving to find work looms large in the historical memory surrounding the Great Depression, and migration continued in the ensuing years. The Second World War led to the largest mass migration within the United States in the nation’s history. 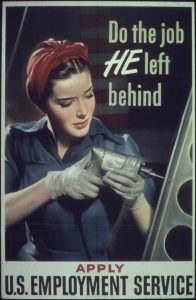 Posters aimed to recruit women to jobs left vacant by drafted men during the war. Office of War Information

People in rural parts of the country learned about new jobs in different ways. Word of mouth was crucial, as people often chose to travel with a friend or relatives to new jobs in growing cities along the West Coast. Henry Kaiser, whose production company would open seven major shipyards during the war, sent buses around the country recruiting people with the promise of good housing, health care and steady, well-paying work.

Railroad companies, airplane manufacturers and dozens if not hundreds of smaller companies supporting major corporations like Boeing, Douglas and Kaiser all offered similar work opportunities. Eventually the federal government even helped out with child care. Considered against the economic hardships of the Great Depression, the promises often sounded like sweet music.

The Rosie the Riveter/World War II Home Front Oral History Project, a collaboration of the National Park Service and the Regional Oral History Office of The Bancroft Library of UC Berkeley, collected hundreds of wartime memories.

During an oral history I recorded in 2013 for the Rosie the Riveter/World War II Home Front Oral History project, Oklahoman Doris Whitt remembered seeing an advertising poster for jobs, which sparked her interest in moving to California.

“[T]he way I got in with Douglas Aircraft was I went to the post office, and I saw these posters all over the walls. They were asking people to serve in these different projects that were opening up because the war had started.”

For a kid from the Great Plains, the notion of going to California to help build airplanes seemed like moving to another world. Whitt grew up on a farm without a telephone. Even catching a glimpse of an airplane in the sky was unusual.

Whitt applied and was hired for training almost immediately. She became a “Rosie the Riveter”: one of the estimated seven million American women who joined the labor force during the war. Even the pay Whitt began earning while training in Oklahoma City was more than she had ever made in her life to that point. When she transferred to the West Coast and arrived in Los Angeles, Whitt felt she was living the California dream.

“Oh, it was great. I remember coming through Arizona and seeing all the palm trees, and those were the first I had ever seen. They were way up in the air, and all I could do was look…. Then we got down into Los Angeles, and I was just amazed at the difference…. I just thought, ‘Oh, boy, we’re in Glory Land.’” 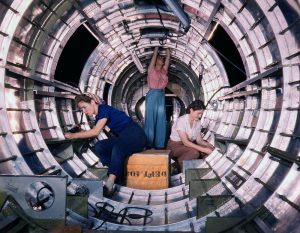 Workers install fixtures and assemblies to a B-17 tail fuselage at the Douglas Aircraft Company plant in Long Beach. Alfred T. Palmer, Office of War Information

Whitt began walking to work every day, to a job at an airplane factory disguised as a canning company. She helped assemble P-38 Lighting aircraft by riveting the fuselage together on the day shift. She later moved to Northern California, working as a welder at a shipyard. When I met her more than 70 years later, she still resided in California.

Did California remain a living dream?

Ultimately, the wartime version of the California dream proved real for some people. The state boomed in the war years. Wartime jobs in the defense industries paid well, profoundly so for those coming from rural poverty. African-Americans, especially those working in extremely poor conditions like sharecropping farmers in the South, moved in large numbers to better their lives. 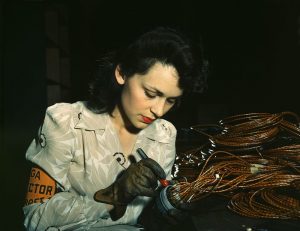 The Golden State didn’t always deliver on the promise it offered to those who moved there during World War II, though.

Many migrants found housing hard to find. Around shipyards, some people even shared “hot beds.” Workers slept in shifts: When one roommate returned home, another would head in to work, leaving behind a still-warm bed. Unauthorized, or “wildcat,” strikes happened across California in spite of wartime rules intended to prevent such labor actions, suggestive of ongoing labor unrest bubbling over in a new wave of strikes happening after the war.

While many women moving to California stayed in relationships, some marriages came to an end as the divorce rate spiked. Whitt and her husband separated not long after her move to California.

And despite wartime factories’ outstanding productivity with women working in traditionally male jobs, women were mostly pushed out of their jobs at war’s end.

Some Rosies returned to their home states. But many others did stay in California, transitioning from wartime work in defense industries to other occupations. After all, the state still offered more progressive social conditions and a wider range of opportunities for women than could be found in many other parts of the country during the post-war era.

Doris Whitt stayed in California and found a job at a meatpacking company, working there for 14 years. She moved to a small town near the ocean where she lived for decades. The California dream never completely disappeared for people like Whitt, but nothing is quite as magical as those few moments when one first discovers it. In her oral history, she remembered seeing San Francisco for the first time:

“Oh, it was fantastic. Fantastic. I’d never seen anything like it in my life. It was just like going to a whole new country, you know? And the ocean… Oh it was just fantastic.”

The California dream continued to evolve in the postwar era, with each passing generation and each new group of migrants making it into something new.