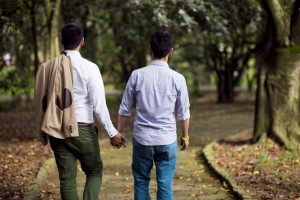 A 2010 meta-analysis of 33 studies found that children raised by same-sex parents fared just as well as other children. Shutterstock

Few debates have sparked such heated debate as same-sex marriage and the prospect of a national plebiscite on the issue. Much of this argument focuses on child well-being, and whether same-sex relationships are stable and secure enough to provide an appropriate environment for raising children.

Both opponents and proponents of same-sex marriage regularly cite research evidence supporting their side of the argument. But what is the evidence and why does it appear to be so contradictory?

Do same-sex couples have (un)stable relationships?

A 2012 British study showed that married and non-married opposite-sex couples tended to sustain longer relationships than same-sex couples. This study is consistent with the findings of a number of previous studies.

There is less research comparing relationship longevity of couples who have children. Some small studies have shown lesbian mothers have more instability in their relationships than heterosexual mothers. However, there is emerging evidence that the rate of divorce and separation is significantly lower among same-sex couples who have children together than child-free couples.

Does this evidence support an anti-same-sex marriage argument?

Paradoxically, the aforementioned data is used to both support and challenge marriage equality.

Supporters of same-sex marriage argue the sense of legitimacy and formality afforded by legal marriage will enhance relationship stability among same-sex couples.

There is evidence that defends this stance, although again it is not consistent. A 2014 US study found no difference in relationship longevity between same-sex and opposite-sex couples who were married. Similarly, a British study found the break up rate of same-sex civil unions was lower than the divorce rate for heterosexual marriages between 2005 and 2010.

Opponents of same-sex marriage argue that evidence showing relationship instability demonstrates that same-sex couples are unable to provide an appropriate environment for children. It is also argued that studies which show children of same-sex couples do well are unreliable due to methodological flaws.

What is the evidence regarding children with same-sex parents?

The study most often cited as evidence that children do not do well when raised by same-sex couples was published in 2012.

This study involved a large, randomly-selected sample of young adults. It found children raised by a parent who had been in a same-sex relationship had poorer outcomes than other children on a range of measures including educational and income attainment, relationship problems and illicit drug use.

This study has been widely critiqued on the grounds that respondents were classified as being a child of same-sex parents if they had not been raised by an intact, heterosexual couple and if one of their parents had ever had a same-sex romantic relationship. This meant the study compared young adults raised in a two-parent, stable family to those who had been raised in a range of circumstances.

A subsequent re-analysis of these data, using a different criteria for categorising respondents, showed no differences in well-being between children raised by same-sex couples and those raised by heterosexual couples.

These criticisms are significant. But the strength of this study is that researchers obtained a large, random sample. This is difficult to achieve due to the very high numbers needed to gain an adequate sample size. As such, most studies rely on convenience samples, which means people have volunteered to participate in the study rather than being randomly selected.

Several subsequent studies, including a large Australian study, have replicated these findings.

Making sense of the evidence

The major strength of the body of evidence showing that children raised by same-sex parents fair equally well to children raised by heterosexual parents lies in the repetition of these findings across multiple, independent studies.

However, given potential bias may be introduced by convenience sampling, some people reject the validity of this research.

But it is important to note that there are methodological limitations of all studies in this area. What does seem clear is that there is no definitive or compelling evidence showing children raised by same-sex couples are not at least doing as well as children raised by heterosexual couples.