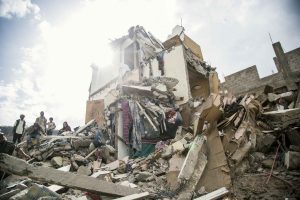 Saudi-led coalition aircraft struck three apartment buildings in Sanaa on August 25, 2017, killing at least 16 civilians, including seven children, and wounding another 17, including eight children. After an international outcry, the coalition admitted to carrying out the attack, but provided no details on the coalition members involved in the attack. / © 2017 Mohammed al-Mekhlafi 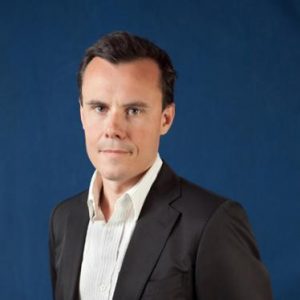 President Emmanuel Macron could be tempted to roll out the red carpet for Mohammed Bin Salman, who is making his first official visit to France. And not only because the Saudi Crown Prince arrives with his checkbook, and lucrative contracts in the bargain. Affinity is also generational.

Macron could easily recognize himself in the young Saudi prince, who like him has jostled the old guard and has propelled himself to the heights of power by promising extensive reforms. Both are young, in a hurry, ambitious and modern.

But the comparison stops here. For behind the image of a daring reformer, carefully cultivated by the Saudi Crown Prince, hides a dark reality. In fact, he is a leader with an iron hand who despite facade reforms has plunged his country into increased repression and leads a now-three-year war in Yemen rife with war crimes.

Unfortunately for the young prince, there are abuses that even the best public relations agencies in the world cannot conceal. As his country’s defense minister since 2015, MBS, as he is known, plays a central role in this war that has left more than 6,100 civilians dead and 9,683 wounded. Most of the deaths have been from air strikes by the Saudi-led coalition that caused death and destruction in markets, hospitals, mosques, and schools. Attacks have struck buildings hosting weddings and funerals.

The coalition also strangles Yemen with a blockade on a country that the UN says has the world’s worst humanitarian crisis. Civilians are hungry, sick and in need. The coalition says it is seeking to stop weapons to the Houthi rebels, but it has also made it extremely difficult for importers, commercial or humanitarian, to bring goods in via the country’s main port. By closing the main airport, the coalition is preventing civilians from leaving. Due in part to coalition restrictions, food, fuel and medicine have become scarce and expensive.

The coalition’s repeated abuses have not deterred France, the world’s third largest arms exporter, from selling arms to Saudi Arabia. Human Rights Watch and other human rights organizations have long called for an arms embargo against the kingdom. A study commissioned by Amnesty International and ACAT found that these arms sales are most likely illegal under international arms trade regulations. These contracts undermine France’s credibility as a defender of human rights around the globe and expose French officials to being held complicit in unlawful coalition attacks.

The crown prince’s human rights record domestically is also poor. While Saudi Arabia’s highly paid public relations firms have promoted his promise to allow Saudi women to drive as of June, Saudi women continue to be treated as second-class citizens. Under Saudi’s male guardianship system, women still cannot travel, obtain a passport, or get married without a male relative’s approval. Moreover, Saudi activists who have pushed for women’s rights, including driving, continue to be harassed and silenced. Saudi Arabia still has one of the highest execution rates in the world.

State repression against human rights defenders and any form of dissent has only increased under the crown prince. Last September, he had many dissident religious leaders arrested, and in November he turned the Ritz Carlton in Riyadh into a gilded prison, in which dozens of prominent individuals, including princes like him, were detained without any due process. According to a New York Times investigation, 17 were treated at hospitals for torture and other mistreatment used to coerce billions of dollars in payments. The operation was opportunely presented as aimed at fighting corruption, but the absence of legal proceedings gave it the appearance of an extortion campaign.

For Mohammad bin Salman’s role in abuses, the pomp in Paris should be dispensed with. He should instead be subject to international sanctions in accordance with UN Security Council Resolution 2140, which calls for a freeze on assets and a travel ban for those responsible for serious human rights violations in Yemen.

The future Saudi monarch is for the moment protected by his powerful allies on the Security Council, of which France is a permanent member alongside the United States and the United Kingdom. But if Macron was sincere when he stated that France would be “incessantly” committed to defending human rights and is able to “reconcile realism and the defense of (its) values,” he should think about the victims of the Yemeni carnage when he meets MBS. He should tell the Saudi crown prince clearly, eye to eye, that France will no longer be able to sell him arms as long as the coalition he leads in Yemen brutally violates international law.