Why does that one video crack you up? / Shutterstock

Think of the most hilarious video you’ve ever seen on the internet. Why is it so funny?

As a researcher who investigates some of the potential side effects of humor, I spend a fair bit of time verifying the funniness of the jokes, photos and videos we present to participants in our studies. Quantifying the perception of humor is paramount in ensuring our findings are valid and reliable. We often rely on pretesting – that is, trying out jokes and other potential stimuli on different samples of people – to give us a sense of whether they might work in our studies.

To make predictions on how our funny materials will be perceived by study subjects, we also turn to a growing body of humor theories that speculate on why and when certain situations are considered funny. From ancient Greece to today, many thinkers from around the world have yearned to understand what makes us laugh. Whether their reasons for studying humor were strategic (like some of Plato’s thoughts on using humor to manipulate people’s political views) or simply inquisitive, their insights have been crucial to the development of humor research today.

Take the following video as an example of a funny stimulus one might use in humor research:

Man vs. Moose in Sweden.

To summarize: A man and his female companion are enjoying a pleasant day observing a moose in one of Sweden’s forests. The woman makes a sudden movement, causing the moose to charge the couple. The man stands his ground, causing the moose to stop in his tracks. After a few feints with a large stick and several caveman-ish grunts by the man, the defeated moose retreats while the man proclaims his victory (with more grunting).

The clip has been viewed on YouTube almost three million times, and the comments make it clear that many folks who watch it are LOLing. But why is this funny?

It is the oldest of all humor theories: Philosophers such as Aristotle and Plato alluded to the idea behind the superiority theory thousands of years ago. It suggests that all humor is derived from the misfortunes of others – and therefore, our own relative superiority. Thomas Hobbes also alluded to this theory in his book “Leviathan,” suggesting that humor results in any situation where there’s a sudden realization of how much better we are than our direct competition.

Taking this theory into consideration, it seems like the retreating moose is the butt of the joke in this scenario. Charles Gruner, the late expert on superiority theory, suggest that all humor is derived from competition. In this case, the moose lost that competition.

The relief theory of humor stems from Sigmund Freud’s assertion that laughter lets us relieve tension and release “psychic energy.” In other words, Freud and other relief theorists believe that some buildup of tension is inherent to all humorous scenarios and the perception of humor is directly related to the release of that tension.

Freud used this idea to explain our fascination with taboo topics and why we might find it humorous to acknowledge them. For example, my own line of research deals with humor in interracial interactions and how it can be used to facilitate these commonly tense situations. Many comedians have tackled this topic as well, focusing on how language is used in interracial settings and using it as an example of how relief can be funny.

A comedy clip focused on interracial interactions gets some of its humor from the relief when a tense situation is resolved.

Interestingly, this theory has served as the rationale behind many studies documenting the psychological and physiological benefits of laughter. In both cases, the relief of tension (physiological tension, in the case of laughing) can lead to positive health outcomes overall, including decreased stress, anxiety and even physical pain.

In the case of our moose video: Once the moose charges, the tension builds as the man and the animal face off for an extended period of time. The tension is released when the moose gives up his ground, lowers his ears and eventually scurries away. The video would probably be far less humorous if the tension had been resolved with violence – for instance, the moose trampling the man, or alternatively ending up with a stick in its eye.

The incongruity theory of humor suggests that we find fundamentally incompatible concepts or unexpected resolutions funny. Basically, we find humor in the incongruity between our expectations and reality.

Resolving incongruity can contribute to the perception of humor as well. This concept is known as as the “incongruity-resolution” theory, and primarily refers to written jokes. When identifying what makes a humorous situation funny, this theory can be applied broadly; it can account for the laughs found in many different juxtaposed concepts.

Take the following one-liners as examples:

“I have an Epi-Pen. My friend gave it to me as he was dying. It seemed very important to him that I have it.”

“Remains to be seen if glass coffins become popular.”

The humor in both of these examples relies on incongruous interpretations: In the first, a person has clearly misinterpreted his friend’s dying wish. In the second, the phrase “remains to be seen” is a play on words that takes on two very different meanings depending on how you read the joke.

In the case of our moose video, the incongruity results from the false expectation that the interaction between man and moose would result in some sort of violence. When we see our expectations foiled, it results in the perception of humor. 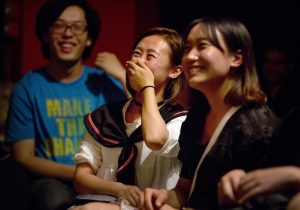 The safety of being in the audience at a comedy show frees you to let loose. Mark Schiefelbein/AP

Incongruity is also a fundamental part of the benign violations theory of humor (BVT), one of the most recently developed explanations. Derived from the linguist Thomas Veatch’s “violation theory,” which describes various ways for incongruity to be funny, BVT attempts to create one global theory to unify all previous theories of humor and account for issues with each.

Thus far, researchers studying BVT have demonstrated a few different scenarios in which the perception of a benign violation could take place – for example, when there is weak commitment to the norm being violated.

Take the example of a church raffling off a Hummer SUV. They found this scenario is much less funny to churchgoers (with their strong commitment to the norm that the church is sacred and embodies values of humility and stewardship) than it is to non-churchgoers (with relatively weak norm commitment about the church). While both groups found the concept of the church’s choice of fundraiser disgusting, only the non-churchgoers simultaneously appraised the situation as also amusing. Hence, a benign violation is born.

In the case of our moose video, the violation is clear; there’s a moose about to charge two people, and we’re not sure what exactly is about to go down. The benign part of the situation could be credited to a number of different sources, but it’s likely due to the fact that we’re psychologically (and physically, and temporally) distant from the individuals in the video. They’re far away in Sweden, and we’re comfortably watching their dilemma on a screen.

Homing in on funny

At one point or another, we’ve all wondered why some phrase or occurrence has caused us to erupt with laughter. In many ways, this type of inquiry is what drove me to research the limits and consequences of humor in the first place. People are unique and often find different things amusing. In order to examine the effects of humor, it is our job as researchers to try to select and craft the stimuli we present to affect the widest range of people. The outcomes of good science stem from both the validity and reliability of our stimuli, which is why it’s important to think critically about the reasons why we’re laughing.

The application of this still-growing body of humor research and theory is seen everywhere, influencing everything from political speeches to advertising campaigns. And while “laughter is the best medicine” may be an overstatement (penicillin is probably better, for one), psychologists and medical professionals have started to lend credence to the idea that humor and laughter might have some positive effects for health and happiness. These applications underscore the importance of developing the best understanding of humor we can.