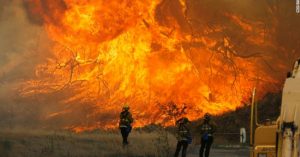 Southern California’s years-long drought has resulted in one of the “most extreme” wildfires the region has ever seen. (Photo: Nick Ut/AP)

As wildfire rages in California, flooding affects millions in India and China, and eggs are fried on sidewalks in Iraq, scientists say global climate catastrophe is surpassing predictions

“What concerns me most is that we didn’t anticipate these temperature jumps,” David Carlson, director of the World Meteorological Organization’s (WMO) climate research program, told Thompson Reuters Foundation late Monday. “We predicted moderate warmth for 2016, but nothing like the temperature rises we’ve seen.”

“Massive temperature hikes, but also extreme events like floodings, have become the new normal,” Carlson added. “The ice melt rates recorded in the first half of 2016, for example—we don’t usually see those until later in the year.”

In Southern California, firefighters are battling one of the “most extreme” fires the region has ever seen. The so-called sand fire had consumed 38,346 acres as of Wednesday morning and forced the evacuations of 10,000 homes, and one person has died.

The fire, which started as a small brush fire along the side of Highway 14 near Santa Clarita, California, on Friday, quickly spread out of control under weather conditions that were nearly ideal for explosive growth. The fire doubled in size overnight on Friday, and then doubled again during the day on Saturday.

“The fire behavior was some of the most extreme I’ve seen in the Los Angeles area in my career,” says Stuart Palley, a wildfire photographer based in Southern California. “The fire was running all over the place. … It was incredible to see.” There were multiple reports of flames 50 to 100 feet high on Saturday, which is unusual for fires in the region.

“Since late 2011,” Holthaus explained, “Los Angeles County has missed out on about three years’ worth of rain. Simply put: Extreme weather and climate conditions have helped produce this fire’s extreme behavior.”

The fire is an omen of things to come, according to Holthaus: “Even if rainfall amounts don’t change in the future, drought and wildfire severity likely will because warmer temperatures are more efficient at evaporating what little moisture does fall. That, according to scientists, means California’s risk of a mega-drought — spanning decades or more — is, or will be soon, the highest it’s been in millennia.”

As University of California professor Anthony LeRoy Westerling wrote Tuesday in the Guardian: “A changing climate is transforming our landscape, and fire is one of the tools it uses. Expect to see more of it, in more places, as temperatures rise.”

Meanwhile, in India’s northeast, Reuters reported Tuesday that over 1.2 million people “have been hit by floods which have submerged hundreds of villages, inundated large swathes of farmland and damaged roads, bridges and telecommunications services, local authorities said on Tuesday.”

Reuters added that nearly 90,000 people are currently being housed in 220 relief camps.

“Incessant monsoon rains in the tea and oil-rich state of Assam have forced the burgeoning Brahmaputra river and its tributaries to burst their banks—affecting more than half of the region’s 32 districts,” the wire service reported.

Local officials also told the media that “more than 60 percent of region’s famed Kaziranga National Park, home to two-thirds of the world’s endangered one-horned rhinoceroses, is also under water, leaving the animals more vulnerable to poaching.”

And in Iraq, temperatures last week reached such unprecedented heights that a chef literally fried an egg on the sidewalk. The TODAY show tweeted footage of the incident:

Stateside, the heat dome continues to inflict scorching summer temperatures across the country. In one Arizona locale, for example, meteorologists are predicting a scorching high temperature on Wednesday of 114° Fahrenheit. One Arizona resident posted a video Tuesday desperately asking people to pray for the state as it faces more hot weather. “It is still six billion degrees,” the resident lamented. “Lord, we need you.”

Yet there appears to be little relief in sight: for the first time ever, USA Today reported Tuesday, the U.S. federal government’s climate prediction center is forecasting hotter-than-normal temperatures for the next three months for “every square inch” of the country.