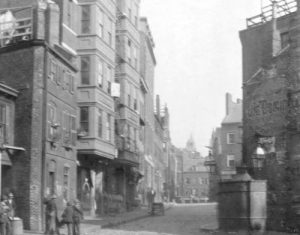 the mid-19th century, brothels were just one among many businesses in Boston’s North End. / Bostonian Society via Wikimedia Commons 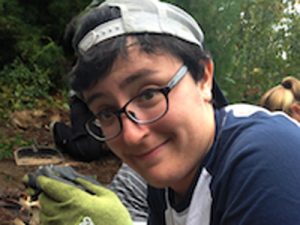 For Jade Luiz, a graduate student in archaeology at Boston University, historical archaeology is all about detective work. Through piecing together historical documents and archaeological finds from the outdoor toilet, or privy, of a former brothel near Boston’s North End, she’s been reconstructing the lives of women who participated in sex work in the mid-1800s.

Louisa Cowen, for example, who in 1856 took over as the madam of 27–29 Endicott Street—the brothel behind which stood the privy—typically presented herself as a respectable widow, according to historical mentions of the brothel and census records. Given her status, she likely wore black clothing and adorned herself in somber black jewelry. Her tombstone names her as the wife of Henry Cowen, a Boston house painter who predeceased her. Whether or not the two had been officially married remains unknown. What Luiz does know is that Louisa Cowen became very successful.

The artifacts from the Endicott Street privy are remarkably complete, and the collection is large. According to Luiz, it looks “like someone was going through closets and dumping everything they couldn’t sell into the privy to seal it off.” She places the timing of this wholesale deposit of household goods to shortly after the property changed hands in 1876. An embossed glass bottle with that date found at the top of the privy heap makes this timeline likely. Despite the fact that these goods were discarded as trash, they now offer clues to the personal etiquette, household ambience, and daily lives of the working women of Endicott Street.

By the 1850s, Boston’s North End, which had been a wealthy neighborhood in the early days of the city, had become a hub of middle-class businesses and immigrant workers. The brothels along Endicott Street were more respectable establishments than those along the harbor a few blocks away that catered to a rougher crowd. Some of the clientele of 27–29 Endicott Street were probably middle-class businessmen who arrived from the nearby rail depot.

For the women of Endicott Street, presenting themselves as clean, fresh smelling, and disease-free was of utmost importance. Bone-handled toothbrushes, American and French perfume bottles, lotion and tooth-wash bottles, and a number of glass syringes that may have been used for douching speak to the women’s high regard for personal hygiene. 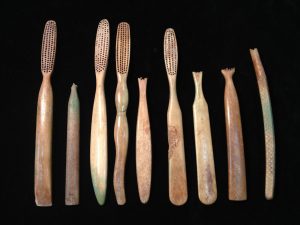 Bone-handled toothbrushes excavated from the privy at 27–29 Endicott Street illustrate the importance of dental hygiene for the women who worked and lived at this brothel. / Michael Hamilton, BU Archaeology Department

When I ask Luiz which of the pieces in the collection are her favorites, she fondly describes two small glass seed cups. The cups would have been kept in bird cages that may have hung in the parlor of the Endicott Street house—or the birds may have been companions to some of the women and kept in their rooms. The small seed cups hint at what the rooms of the Endicott Street house might have been like, with songbirds chirping in the low-lit, perfumed interior.

And while most boardinghouse residents of this era complained of too many stews and cheap roasts, and expressed their longing for a roast chicken, the fare at the Endicott Street brothel was “a little fancier,” says Luiz. “It doesn’t look like typical boardinghouse food.”

From the hundreds of cherry and peach pits to a variety of nuts and animal bones, it’s clear that the women—and perhaps their guests—ate well. Smells of pork chops, pig’s feet, and the occasional roast bird likely mingled with the fragrances worn by the brothel residents.

Luiz sometimes holds onto tiny bits of information for years, she says, gradually bringing together the fragments to re-create life stories. These stories offer a counterpoint to the perception of sex work in history. “These women tend to be portrayed in one of two ways,” she says of historical records of brothels and sex work in America and Europe. “There’s either this moralizing censure and desire to save the fallen women, or they’re being eroticized for the titillation of the public.” 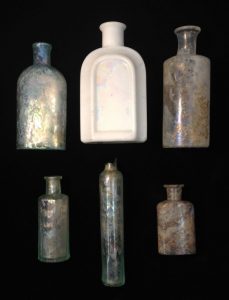 The story of Cowen, Luiz continues, is a perfect example of a woman who made an economic decision to enter a profession in which she could thrive. In the 19th century, a sex worker could earn as much in a single night as a factory worker could make in a week. After moving from rural Vermont to Boston’s Endicott Street, Cowen quickly became quite prosperous. By the time she died in 1865, she had paid off the mortgage on her family’s farm in Vermont and was able to leave a wealth of expensive goods, clothing, and jewelry to her siblings. According to probate records from the year she died, Cowen left “all of her black jewelry”—her trappings of widowhood—to one of her sisters.

When Luiz found a broken black cross among a few pieces of lost or discarded jewelry in the privy deposits, she wondered about its meaning and origin. “I can’t be sure, but I like to think that maybe that piece once belonged to Louisa as part of her black collection,” she explains. “That’s my other favorite artifact.”

The physical objects that were a part of the daily lives of the women of 27–29 Endicott Street are a reminder of the humanity of these individuals. By reconstructing the stories of the women who lived and worked in historic Boston, to some extent bringing them back to life, Luiz wants to show that sex workers were—and are—real people.