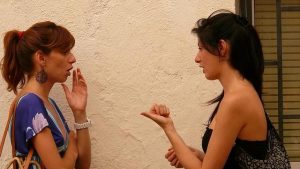 Dr. Gragera’s PhD is in psycholinguistics.  He is a professor in the Department of Modern Languages at Texas State University. 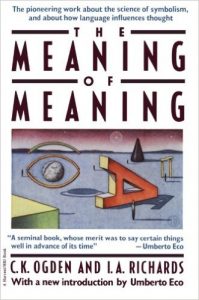 The Meaning of Meaning / C.K. Ogden and I.A. Richards

There is no possible exchange of information without paying heed to meaning.  Everyone pays heed to meaning.  Talking semantics is all we do, but this is not what we mean by “talking semantics.” Like everything in linguistics, speaking of semantics in lay terms risks becoming a conceptual loop, a riddle. What is the meaning of meaning? But that is always the paradoxical nature of language. An imperfect system of signs if there ever was one.

What do we mean, in lay terms, by talking semantics?

Normally, it is used as a dismissive stand, and it translates as either “you just want to win your argument at all costs” or “I am losing mine miserably.” Each interpretation stands for a different construct of semantics. One is “we differ in what we mean.” The other is “you are trying to deceive me with a sophism.” Let me illustrate this as graphically as possible.

Imagine that you are discussing some current political affairs in the United States with a fellow citizen, and imagine that you are defending the values that you believe are inherent to a democratic system. Naturally, you are presupposing that you and your interlocutor share a common cultural understanding of democracy. Imagine now that, all of a sudden, you are faced with the argument that the United States is not a democracy. What would your reaction be? Well, before you pass any judgement about the sanity of your interlocutor, understand that this person may be referring to the terminology used in the founding documents of the republic or even to the etymology of the term. If I were you, I would be thinking that my interlocutor is “talking semantics”, and by the way, the one losing the argument miserably. This person is intentionally playing with concepts to troll the conversation. I would dismiss the argument with a condescending “you’re just talking semantics” remark, and rightly so, but not so much because it is strictly a matter of semantics. More on this later.

Now, I am trying to imagine a possible scenario where you might be accused of “talking semantics” so your opponent can pretend to lose the argument with some degree of dignity. I cannot recall any from my own experience. There is an explanation for it. As a linguist, I never say that something is a matter of semantics gratuitously. I mean it. I also do not let anyone use it against me to save face. Whether your understanding of semantics is folk-like – and perfectly acceptable as such – or, let’s say, more academic, I know better. Stop the bleeding.

A most gracious way to carry on a civilized conversation is to say things like “it is a matter of terminology” instead of summoning semantics when our disagreement is, in fact, a matter of terminology or of phrasing – mostly to avoid the negative connotations of “talking semantics.” I recall an animated chat about the meaning of the word diversion – life can get quite lame sometimes – where I was careless enough to claim that it is a Latin word instead of a word that derives from Latin. When the argumentation could not get any more circular, I realized what the problem was. It is a pity that English distinguishes between German and Germanic but not Latin and Latinic. And this, my friends, happens to be an instance in which “talking semantics” could not be more accurate, although you might have never said it was one. 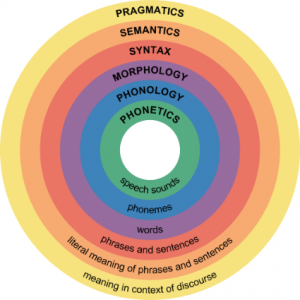 In its broader sense, semantics is the study of meaning. We normally use it to denote a misunderstanding caused by the connotations of our choice of words. It is beyond question that the words we choose matter, but this is too narrow a definition of meaning.

Things are beginning to get muddy. How do signs and symbols relate to words and phrases? A sign is any unit of language. Prefixes and suffixes are included in the category of signs (remember how English distinguishes German from Germanic?) along with words and sentences. Symbols are used for the representation of the linguistic information about an utterance, the sort of the linguistic representations used in computational linguistics. For now, let’s concern ourselves with the linguistic sign and leave linguistic symbols, the object of formal semantics, for some other time.

Perhaps, the simplest way to illustrate how linguistic signs encode denotative meaning, which is to say how human beings can use language to convey information about the external world, is to look at the basic properties for which a descriptive theory of lexical semantics should account.

Lexical ambiguity is the presence of two or more possible meanings within a single word. It has been categorized as either polysemous, when meanings are related, or homonymous, when unrelated. It is considered that only homonymous are true lexical ambiguities, as it appears that unrelated meanings slow information processing time. As in:

She is looking for a match.

The minister married my sister.

As we can see, context is highly relevant in processing ambiguities. But ambiguities happen not only between homonymous of the same grammar category. English is a language not bound by strict rules of derivation as are Romance Languages, and it is in English that there is no morphological distinction between a noun and a verb – and sometimes not even phonetic distinction – or a tensed verb and an adjective:

Let’s table this matter for now.

The candidate is not very well spoken.

In this case, syntax is the other source of meaning. Syntax (grammar) and Semantics (meaning) are intimately connected; in linguistics, all fields intersect. However, semantic ambiguity and syntax ambiguity are not the same thing. Thus, an [American History] teacher is not the same as an American [history teacher]. There is no ambiguity in the content words, the ambiguity comes from their parsing.

Two words are synonyms if they share all their semantic features, such as big and large. But this is all relative. The process of selecting semantic features adds another layer of complexity to “making meaning”

Semantic features are relevant in the process of categorization of the world. We create sets of things based on their perceived commonalities. This perception is never universal. So, I can very well give the words big and large the following semantic features: [- human] [+ volume]. But what happens when the features are [+ human] [+ volume]?  Then, My big sister and My large sister are not quite the same thing.

When two words have opposite semantic values in one single semantic feature. In ordinary terms, we may consider polarized concept to be antonyms:

For us, if something is not one thing, then it is the opposite. But we also have gradable antonyms, opposite concepts in a continuum:

While no living creature can be literally very dead or a little alive, water can be very hot or a little cold. And finally, there are converse antonyms. They express a relationship between items from different perspectives:

If X is above Y, then Y is below X. Notice how trying to assign a semantic value to gradable and converse synonyms is impossible.

A hyponym is less familiar to people than antonyms and synonyms, but they refer to a very important sense relation. It is a word that contains the meaning of a more general word called superordinate. A robin and a penguin, as different as they are, are hyponyms of bird. In other words, a hyponym contains all the same feature values of another word –and then some.

Sister, niece, aunt, mother, nun and mistress share two semantic features: [+human/ -male]. They are all hyponyms of the word woman, while only some of them share the feature [+kin].

Why is the sense relation between hyponyms so important? Well, this is part of our general cognitive mechanisms. To make sense of the world, we need to organize it. In our brains, all organizations are hierarchical. What is relevant here is to understand that these organizations are often culturally bound. In his book Women, Fire, and Dangerous Things, George Lakoff explains that the same way some languages mark gender, some native Australian groups mark words according to a quite different view of the world. In their conceptual universe, women share some relevant semantic features with fire and dangerous things. But this too is something we must leave for some other time. It further complicates things. 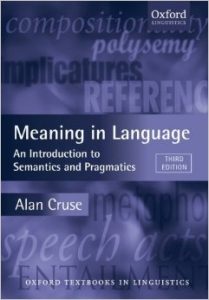 Meaning in Language: An Introduction to Semantics and Pragmatics / Alan Cruse

As it seems, connotative meaning is often embedded in denotative meaning. Here you have it. The announced conceptual loop. As I promised, talking about linguistics is like doing acrobatics. You just hope to land as graciously as possible. If you have made it this far, you may want to leave making some sense of all this. It is appropriate then to end with the moral of the story: for the sake of civilization, make your semantic disagreements be just terminology disagreements.