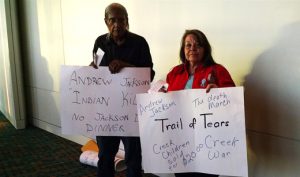 NASHVILLE, Tenn. – On May 7, local Native Americans – Cherokee, Muscogee Creek and Choctaw – held a spirited demonstration in opposition to the annual Andrew Jackson Day Dinner sponsored by the local Democratic Party. The dinner was held at the newly minted Music City Center in Nashville.

Area local American Indians have long opposed any celebration of that arch architect of genocide, Andrew Jackson. A number of signs carried by demonstrators read “Indian Killer Jackson. He is considered in Native American circles as an early-day American Hitler. The demonstration was part of an ongoing campaign by the local Indian community to combat the legacy of Jackson.

Jackson was responsible for the agonizing deaths of thousands of Native Americans-men, women children, elderly- beginning with the Creek War of 1813-14. He enslaved Native children taken as war captives. That War, was “a massacre from beginning to end” according to historian William G. McLoughlin.

In the 1830’s with the passage of Jackson’s infamous Indian Removal Bill, he was responsible for the hideous deaths of tens of thousands more American Indians – Cherokees, Creeks, Choctaws, Chickasaws and Seminoles-on the Trail of Tears. The Cherokees alone suffered the loss of 4,000-8,000 lives.

As for the dinner, Democratic National Committee Chairman James Carville, was the featured speaker for the event. The demonstrators had leaflets denouncing the dinner and explaining why, which were distributed to the attendees as they entered the meeting ballroom.

The dinner is a yearly event held every May to garner public support for the Democratic Party locally and nationally. It has also been brought out that many within the local party opposed the Jackson Dinner to such an extent that the event passed muster by only a few votes last year.

The dinner was not without confrontation as event security tried to intimidate the demonstrators to move from the venue area. They maintained that the Democratic Party had rented the entire floor and all demonstrators had to stand outside the building on the curb to hand out leaflets to passers-by and passing motorists. The Music City Center is so huge that it looks surreal, occupying several city blocks and is three stories high with three levels underground. Security was in fact telling the demonstrators that the Democratic Party had rental rights to the entire gargantuan facility to the exclusion of all others. This writer, who was one of the organizers of the demonstration, at this point informed security of the legal rights of the demonstrators and to further “Call the police” if they disagreed. Nothing more was heard from security. The demonstrators held their ground.

When organizers asked the local Democratic Party Chairperson, Mary Mancini, about security trying to intimidate the demonstrators, the muted response was: “that didn’t come from us.”  Readers can decide for themselves whether this is a believable statement.

Albert Bender is a Cherokee Indian. He is a freelance reporter and political columnist for News From Indian Country, and other Native and non-Native publications. He is also a historian and attorney specializing in Native American law. Currently, he is writing a history of the Maya Indian role in the Guatemelan civil war of the late 20th century.