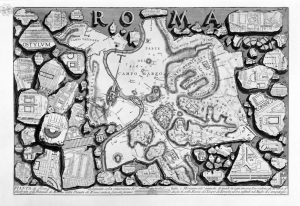 What did the ancient city of Rome look like? What was it like to walk through Rome’s streets? Did the ancient city resemble the Rome that we know today? For centuries, this set of questions occupied the attention of artists and scholars, ranging from engravers like Giovanni Battista Piranesi who produced “views” and a map of the ruined state of ancient Rome (above), to mapmakers like Giambattista Nolli whose famous map of the city was produced in the time of Pope Benedict XIV (1748), to archaeological plans like the Forma Urbis Romae produced by Rodolfo Lanciani at the end of the nineteenth century. One thing that Piranesi, Nolli, and Lanciani had in common was an awareness of the fragmentary remains of a much older depiction of the city’s layout, the so-called “Severan marble plan” that dates to the third century C.E. 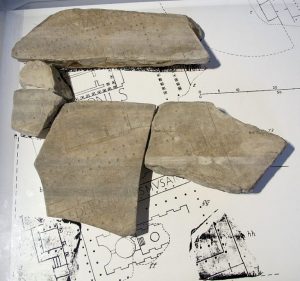 The Severan marble plan of Rome (also known as the Forma Urbis Romae) was a carved plan of the city of Rome produced during the first decade of the third century C.E. and mounted on a wall of the Temple of Peace in Rome. Rendered at a scale of approximately 1 to 240, the Severan marble plan was engraved on 150 marble slabs and originally measured approximately 60 by 43 feet (18.1 by 13 meters). The orientation of the map itself would seem at odds with our twenty-first century north-oriented outlook—the Severan marble plan was oriented with south at the top. The plan is a detailed and intricate undertaking, with building layouts shown for the city of Rome—including temples, public buildings, public baths, houses, and the housing blocks (insulae) of the city. Interior details such as columns and staircases are also indicated, and some complexes—particularly notable public ones—are labeled. 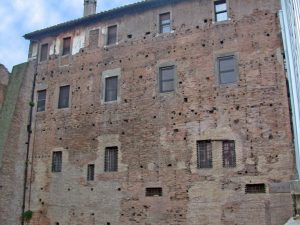 The wall of the Temple of Peace where the Severan marble plan once hung (photo: Wikimedia Commons)

After antiquity, the marble plan disappeared—the metal clamps that affixed it to the wall were likely robbed and the slabs simply collapsed to the ground. The first recorded rediscovery of the Severan marble plan was in 1562 when Giovanni Antonio Dosio excavated fragments near the sixth-century basilica church of Santi Cosma e Damiano. The basilica incorporates former architectural elements of the ancient Temple of Peace that had originally been built by the emperor Vespasian in the 70s C.E. The fragments were passed between multiple sixteenth-century collectors, but there was little interest in examining them closely at that time. But in 1741, the fragments became property of the city of Rome and were subsequently studied and drawn by scholars and artists, including Piranesi, and research continued throughout the nineteenth and twentieth centuries. Additional fragments were discovered in 1999 and others have appeared sporadically since then. In all only approximately 1,186 fragments of the original plan (only about 10-15%) are known to survive. 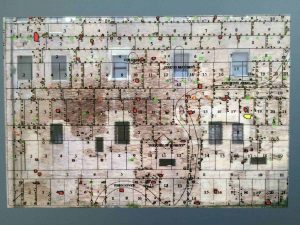 The conjectural restoration of the fragments (above) suggests that the viewer would have been presented with an urban panorama in plan view, complete with miniscule details. What purpose the plan served, however, remains an open question for scholars. It is likely that the official offices for the government of the city of Rome during the imperial period occupied rooms next to the wall where the marble plan was hung, suggesting that it may have had an official, administrative function. Its scale and location, however, call it into question as a practical, useful object. The marble plan may have served a more representative function, placing it in line with painted and carved landscape views—both fantastical and realistic—known from other examples of Roman art. 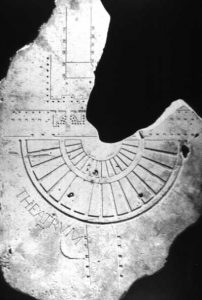 Reconstruction of a part of the Forma Urbis Romae showing the theater of Pompey (photo: Ulysses K. Vestal, public domain)

Whatever its original use, the marble plan provokes and stimulates the imagination of the viewer: those who have studied the fragments have drawn enormous inspiration from this view of the city. The fragments influenced Lanciani’s creation of his own archaeological map of Rome (Forma Urbis Romae, 1893-1901), which in turn strongly influenced Italo Gismondi and his team as they designed and built the famous model of Rome (Plastico di Roma antica) first exhibited at Rome in 1937 (now in the Museo della Civiltà Romana, Rome). Gismondi’s model still strongly influences views of what ancient Rome looked like, revealing a continued interest in the question of how one might imagine the ancient city.