With skateboarding’s inclusion in Tokyo 2020, a once-marginalized subculture enters the spotlight

On Aug. 6, skateboarding was added to the list of new sports for the 2020 Tokyo Olympics.

Now, six million skateboarders in the United States – plus millions abroad – will have a global platform to promote skateboarding as a cross-cultural community that possesses a set of shared values.

Though skateboarding culture has often been thought of as the home of unruly, unlawful, anti-establishment youth, the sport may actually communicate the Olympic ideal to millions of millennials who haven’t been tuning into the Olympic Games.

As someone with 20 years of experience in the skateboarding industry – and as the teacher of a course on skateboarding culture at the University of Southern California – I’ve seen how the sport can promote diversity, identity, youth empowerment and global citizenship.

Diversity in its DNA

In the International Olympic Committee’s (IOC) own words, “The mission of the IOC is to not only ensure the celebration of the Olympic Games, but to also encourage the regular practice of sport by all people in society, regardless of sex, age, social background or economic status.”

Since its earliest days, skateboarding has advanced these ideals in myriad ways, and a range of ethnicities and experiences make up the DNA of skateboarding culture.

In the 1970s, a group of surfers dedicated to the Zeypher surf-shop in Santa Monica, California – who came to be known as the Z-boys family – developed an aggressive style that was necessary to surf the dilapidated, defunct Pacific Ocean Park in Santa Monica.

In between waves, the group would explore and experiment with their skateboards. Soon, the motley crew completely transformed skateboarding from a toy plank with wheels to a vehicle of athletic and artistic expression.

During the drought-plagued summers of 1970s California, many swimming pools – a symbol of both commercial success and excess – were drained to save water. Where some might see blight and abandonment, the Z-boys and their peers saw opportunity: The emptied swimming pool became the first unofficial skate park, a concrete canvas to hone one’s skills and experiment with daring new tricks. 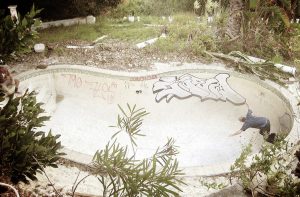 Early pioneers included Tony Alva, a skater and surfer of Mexican and Dutch descent, and Japanese-American female skater Peggy Oki. (Both have been inducted into the Skateboarding Hall of Fame.)

During the 1980s, legendary Z-boys skater Stacy Peralta promoted the careers of skateboarding luminaries Steve Caballero, who was Japanese and Mexican-American, Tommy Guererro (Filipino-Chilean and Portuguese-American), Salman Agah (of Azerbaijani and Iranian descent) and African-American Ray Barbee. According to Transworld Skateboarding Magazine, all are among the most influential skaters of all time.

Learning to make do

Importantly, skateboarding remains affordable and accessible. A skateboard generally costs between $65 and $125, and within the community there’s an ethos of conserving equipment. For example, the skateboarding company Element’s “No Board Left Behind” project is a green initiative that repurposes used skateboards for kids in need.

There’s a similar commitment to repurposing urban spaces. In Sao Paulo, Brazil, Praca das Aguas was a public park that was rarely used. But in 2010, local skater Tulio de la Oliviera took the initiative to build the first skateable structures in the park.

Over time, the entire Sao Paulo skate community contributed cement for ramps and ledges without the help of the government or a nongovernmental organization (NGO). Today, Pracas das Aquas remains a free public space for everyone. It’s also fertile ground for training the next generation of Brazilian skateboarding Olympians.

Contrast this with traditional sports, like swimming and tennis, which require expensive equipment, lessons and training facilities. Skateboarding also doesn’t require a formal coach, falling perfectly within the IOC’s desire to be inclusive, regardless of class or economic status.

Today, there are a number of skateboarding NGOs that seek to use skateboarding as a way to empower youth or promote gender equity.

The NGO Skatistan has brought skateboarding to war-torn Afghanistan, where the sport is used as a vehicle to educate and empower male and female youth. Meanwhile, pro skater Amelia Brodka’s annual skateboarding event “Exposure” seeks to bring together females skaters from around the world.

In my own research, I’ve documented thriving skateboarding communities in Brazil, Cuba, Switzerland and South Africa. Some of this work was on display during the John F. Kennedy Center’s celebration of skateboarding culture, “Finding A Line,” in May of 2015.

Most recently, via the U.S. State Department’s SportsUnited program, I became the first skateboarding U.S. Sports Envoy to the Netherlands. There I worked with Syrian refugee youths who had been granted asylum in the Netherlands and the Dutch and foreign children of the International School. Using skateboarding, we created shared experience between the two communities.

Why it took so long

Skateboarding’s unique culture isn’t based solely on competition. It’s also about the individual skater’s identity and his or her contributions to the skateboarding community.

Similar to jazz, skateboarders may play within an “ensemble” (i.e., their local crew). But they’re judged on the spirit and style in which they’ve inspired others to express themselves and become better skaters. In this, skateboarding represents the idealized dream of sport: to create a global community with a shared identity.

But skateboarding’s Olympic arrival has been slow, and there are two main reasons: initial apathy among the skateboarding community and the IOC requirement that the sport establishes formal governance.

In fact, there’s a contingent that doesn’t believe skateboarding should ever enter the Olympics: over 5,000 skateboarders signed an online petition denouncing the move.

Because skateboarders see their sport as an opportunity for individual expression, they believe governing bodies and rigid guidelines betray the ethos of the culture. As the petition states, “Olympic recognition will not do justice to the purity, individuality and uniqueness of skateboarding culture … [and] viewers of the Olympic games will not be interested in skateboarding.”

There’s real anxiety over the idea that, by joining the Olympics, a subculture that has long been a conduit for self-expression could be “going mainstream” and, in the process, lose its authenticity. When snowboarding was first rolled out as an Olympic sport in 1998, it was bungled on a number of fronts. Some snowboarders boycotted. Others became roiled in controversy after testing positive for marijuana. For these reasons, many skateboarders are wary of being brought into the Olympic fold.

For the IOC’s part, the decision could be strategic. Olympic TV viewers have become older and older (the median age for London 2012 was 48; for Sochi 2014 it was 55), and the decision to include skateboarding was probably influenced by a desire to attract younger demographics.

When announcing the new sports for Tokyo 2020, which also include softball and karate, IOC President Thomas Bach said in a statement, “We want to take sport to the youth. With the many options that young people have, we cannot expect any more that they will come automatically to us. We have to go to them.”

He added that skateboarding and the other sports are “an innovative combination of established and emerging, youth-focused events that … will add to the legacy of the Tokyo Games.”

Anxieties aside, as someone who has seen what skateboarding can mean to the children of Cuba, Brazil, South Africa, Switzerland, Spain and the Netherlands, I believe skateboarding can exist within the Olympic structure. The key, of course, is that any sort of governing bodies or guidelines doesn’t homogenize the community or the sport, and that revenue-sharing from the Olympics is directed back into skateboarding communities, so this healthy, supportive culture can thrive.

If all goes well, skateboarding culture will continue to flourish under the Olympics banner, helping the Olympic Games become more diverse, inclusive and accessible.