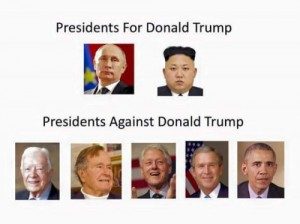 Donald Trump watches Vladimir Putin admiringly, as the despot reassembles the Russian Empire, and he dreams of similar conquest. Trump has vowed to make America great again, and domination is what he means. Donald Trump’s vision is a grotesque paraphrase of Ronald Reagan. Trump sees this country as the Shining Fortress of Solitude on the Hill, dispatching the military to rule over its Imperial outposts.

Trump supporters long for an America of memory, one that will not be kicked around. But this is a faulty memory, a confabulation. For all but the twenty-five years following the Second World War, America hasn’t dominated the world. America didn’t win the World Wars alone, for that matter. America did not even get into those wars for two years after they began.

The undeclared Korean War is a stalemate that has never been resolved. The Vietnam War was a debacle. The first Gulf War essentially was uncontested, and the wars in Afghanistan and Iraq have been unqualified disasters. No disrespect for those who served and serve, the wars themselves were atrocious mistakes. The Iraq war was a fraud on the troops and the taxpayers.

Yet Trump promises to return America to its winning ways. He believes in an America of the imagination, a vision of Empire that drove this country down the dishonorable road of genocide and displacement of the indigenous peoples; into a series of wars in the West to maximize its North American territory; and wars in the Caribbean and the Philippines to drive Spain out of North America once and for all, while establishing a U.S. beachhead in East Asia.

Empire is inherently despotic, even those that are nominally democratic, because there is no equality between the ruler and the ruled, domestic or foreign. Trump says, “I am your voice.” No, you’re not. You’re not my voice, and you’re not my Nation.

The American people will have to fall much farther than we think we have fallen to abandon our civic sovereignty, our right of self-determination. Why would Americans give up the rights guaranteed by the Constitution to someone who does not respect the rule of law?

Trump’s admiration for Putin is instructive. He lauds Putin’s assertiveness in the Crimea and Syria, just as he attacks Obama for his decision not to enter those military theaters. Russia’s actions have precedent, pushing out to the expanse of the former Tsarist and Soviet Empires. Putin has the backing of many countrymen who rue the collapse of Communism. Marcel H. Van Herpen, the author of Putin’s Wars, explains why Russians are willing to yield their hard-won freedoms:

In such a case, the home country’s imperial conquests provide an ersatz satisfaction. Feelings of powerlessness and a lack of personal pride and individual accomplishment are compensated by a process of identification with the power and the glory of their country. The lack of personal respect that they receive as individuals is compensated by the respect—and fear—that their home country inspires. “If a man is proud of his Belief, his Fatherland, his People,” one can still read in an anonymous Russian publication of 2007 attacking democracy, “he finds internal pride in himself as a representative of this great people and great country.” This mechanism can be observed in a population of serfs that has been enslaved, as well as in a population that gives up its original freedom and enslaves itself for the sake of national glory.

Trump’s nostalgia for an idealized American past, a short-lived one at that, taps into an anger borne of a sense of powerlessness. Americans have limits, as all other people of the world do. People who grew up in the post-Second World War era take this as a defeat, because from 1945 to 1968, America was a country of nearly limitless resource and possibility. That era has been gone for longer than it was here, and all of us longing for it will have to live off the fumes. The world has changed, and America is no longer its overwhelming economic force.

For many Americans, it has meant financial desperation and hopelessness for their children. Somebody’s going to pay for that. The authoritarian strain in America is real. It has been gaining force, while the European-descended portion of population slips in political force and our economy comes back to the pack.