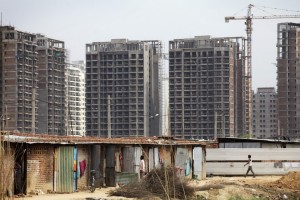 The city of Gurgaon, roughly a half-hour’s drive south of New Delhi, has survived without a functioning municipal government for roughly four decades. If the city of 2 million residents needs to pave a road, or hire police, firefighters or garbage collectors, a patchwork of private companies makes it happen. Or … not.

“It’s a weird place,” says Shruti Rajagopalan, an economist at SUNY Purchase who grew up a short drive away from Gurgaon. She co-authored, with her colleague Alex Tabarrok, a 2014 study of its strange inner workings. “It shouldn’t exist, theoretically.” And yet, the city is a magnet for India’s middle class. The population has swelled by more than 1,600 percent over the past 25 years. “People are just clamoring to move to Gurgaon,” she says. Which raises an intriguing question: Should other cities embrace Gurgaon’s radical experiment in privatization? She explains why, despite its pitfalls, Gurgaon offers a strangely promising blueprint for urban development.

An unplanned city can grow at astonishing speeds. In 1991, India’s legislature passed a raft of economic reforms that opened sectors of the economy to foreign companies. At the time, Gurgaon was an unexceptional town of 121,000 people surrounded by vast tracts of fallow land. By a regulatory quirk, the land around Gurgaon was managed by a single agency, the chief minister’s office in the state of Haryana, versus India’s usual thicket of competing government agencies. It meant that developers’ plans in Gurgaon could be approved in a matter of days, not years. The result? Fast-track approvals for office parks, luxury condominiums, five-star hotels and golf courses. Half of the Fortune 500 companies launched satellite offices in the city’s gleaming high-rises, and it’s home to one of the largest shopping malls in the world. “There are parts of it that look like Singapore or Hong Kong or any world-class city,” says Rajagopalan. But rushing into a bureaucratic void posed a challenge for developers: Who, if not the state, would provide basic public services? “If you ask a regular person, ‘Would you want to live in a city that doesn’t have a functioning sewage system or garbage disposal or a good network of roads,’ they’d probably say no,” says Rajagopalan. So the developers had to convince potential renters to say yes — by filing in the gaps in the city’s sparse public services themselves.

A patchwork of private services emerges, but only within property lines. A mere one-third of Gurgaon’s residents are connected to the city’s main sewage line. Not that the residents of private apartments and offices would notice. “If you’re living inside the development, everything looks great. It looks like you have functional sewage, but those lines are not connected to a main line. They go nowhere.” Instead, the sewage collects in a septic tank at the edge of the property. The building’s owner contracts a tanker truck to ferry the sewage to a dumping ground or river. It’s not ideal, but it’s hardly out of the norm in India. Of the 5,161 cities and towns across India, 4,861 lack even a partial sewage network. So long as Gurgaon’s developers provide superior services compared with other towns in India, the city will keep growing. Gurgaon’s developers can weather shortages in electricity by using diesel-powered generators … which serve only their own properties. They’ve beefed up the city’s 4,000-strong police force with an army of 35,000 private security guards. And one of the city’s largest developers, DLF (originally Delhi Lease and Finance), opened the nation’s first privately owned fire station in 2012. The city’s small public fire station didn’t have hydraulic platforms that could spray water to the top of DLF’s highest towers, so the developer simply purchased two 90-meter platforms for its own state-of-the-art firefighting service.

A dystopian world between privatized compounds. Gurgaon does have some public services; “old Gurgaon,” about 35 sq km in size, is technically a town with a municipal body to manage it. But there are intolerable gaps in the city’s infrastructure. Private security guards may secure the grounds of an apartment or an office complex, but that leaves massive security gaps in the rest of the city. “Between one industrial park and another industrial park are empty areas that are not safe areas at all,” Rajagopalan says. Sewage trucks will frequently bypass treatment plants and dump their contents on public land, and while it poses a health hazard to nearby slums, public officials don’t have the resources to counter such infractions. In short, Gurgaon’s success story is confined to an archipelago of private compounds populated by those who can afford to live there. Look beyond those select properties — and into the city’s slums — and Gurgaon presents an object lesson in the limits of privatization. There, the residents suffer from power and electricity shortages, and the same unsafe and unsanitary conditions that shape daily life for so much of India’s urban poor. The pressing question for them is how a rapidly urbanizing nation will absorb another 404 million residents into its cities by 2050, according to one United Nations estimate, and not suffer a complete breakdown of public services.

One paradoxical solution to Gurgaon’s heedless growth  — sell off still more of the city. Rajagopalan offers an unlikely solution to India’s growing pains. Yes, developers show a dismaying lack of civic responsibility beyond property lines. But a funny thing happens as they snatch up larger and larger tracts of land. They develop an incentive to build — and finance — the missing pieces of public infrastructure. “Right now DLF doesn’t find it in its interest to run its own huge sewage system, because it has only four or five small developments,” she says. “It’s not profitable to run to a main sewage line and then treat the waste. But if it had a large enough property, then it would absolutely do it — otherwise no one would live there.”

The private city has a precedent: Walt Disney World. In the 1960s Walt Disney bought up a 25,000-acre wilderness known as the Reedy Creek Improvement District in Florida. Today, you probably know it as Walt Disney World, and Rajagopalan holds it up as an example of what private developers might need to do once they own massive parcels of land. They’ll build every public service imaginable — from roads to power plants to a metro system — in a bid to retain residents. “Disney benefits if people decide to stay in one of the Disney hotels when they visit Disney’s theme park,” she points out — so Disney basically built its own city, though of course sans traditional city perks like citizen participation and social services. “They have their own sewage system, police system, fire system — and everything seems to work completely in the background,” she says. “They are large enough in scale and they’re large enough in terms of profitability that they can have their own systems for each of these problems.” Gurgaon’s developers have the same incentive to serve residents, Rajagapolan suggests — but only if they can unite their scattered developments into a single, city-sized expanse of property. Currently, Gurgaon encompasses 730 square km, large enough to hold seven Disney Worlds — or as Rajagapolan sees it, seven privatized cities competing for residents. It’s a rather fanciful vision of urban development that leaves some troubling questions unanswered. Then again, the same could be said of Gurgaon itself.