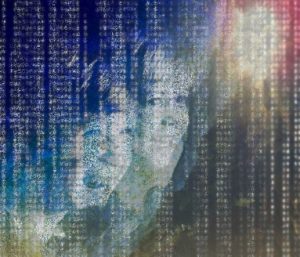 When I read anthropologist Natasha Dow Schüll’s book on gambling, Addiction by Design, it started me thinking of how machine gambling works as an analogue for social media: Both facilitate an escapism through engagement, an immersion in immediate risk-taking routines that obscures the larger existential crises. (A lot more about that in this post.)

Both also seem like masochistic practices that one adopts to escape or offload the burden of self. You do these things to forget about who you are and how you are responsible for how you are seen. That maybe makes more obvious sense about gambling machines, which narrow subjective experience to immediate and arbitrary reward seeking, but perhaps seems like a paradoxical thing to claim about social media, given that they ostensibly serve to build up, circulate, and store the self (or at least the carefully curated tokens of identity). It might seem weird to say that we express ourselves to escape ourselves. But self-expression can dissolve the self as well as build some enduring, legible version of a self.

This 1988 paper by psychologist Roy Baumeister, “Masochism as Escape From Self,” may help in addressing the apparent paradox. He argues that masochism is essentially the shadow of individualism. The pressures of having a unique self — the “high-level self-awareness” and high-pressure decisionmaking involved — can become aversive, and lead to an intensification of the desire to escape from self.

He adds later that “there may even be a cyclic escalation, in which the more responsibility and esteem a person accumulates, the more difficult and exhausting it is to sustain them.” He also notes that “high levels of esteem and agency produce the most complex and elaborate selves, which may also be the most burdensome selves. As a result such individuals may seek the strongest modes of escape—such as masochism.”

Much of social media is a calculated effort to “accumulate” esteem and grant agency. It seems plausible that the intense self-consciousness of ongoing social-media use (certainly a “recalcitrant social environment,” despite its responsiveness) could trigger an intense need to escape from self. Social-media use intensifies self-consciousness through a deeper awareness of the contingencies and vulnerability of our identity, leading to a greater need to escape from it, or at least suspend our consciousness of it.

Somewhat less plausible maybe, though I still believe this is worth exploring, is the possibility that the escape from self that social-media necessitates is often sought through an intensification of social-media use. If some portion of social media use can be characterized as masochistic, or if it can be at once masochistic and self-aggrandizing, then it may be used to alleviate the “burden of self” Baumeister describes even as it intensifies it. Not only would this let us keep obeying the imperative to “express ourselves” and build out our all-important online reputations and networks, but it would allow us to address the anxiety of self-consciousness in the environment that prompts it. To address and control how social media make us feel would seem to require deeper engagement with social media, as in a negative feedback loop. Social media, in other words, has affordances to make “self-construction” masochistic and self-negating — as well as addictive, or self-affirming, or strategic. (Social media makes the self cohere in contradictions.)

According to Baumeister, masochism allows people to escape the self by orienting them on the immediacy of physical experience and by allowing them to dissociate through the creation and inhabitation of a “fantasized identity”:

Those points about fluid identity and physicality seem not to correspond to social-media use; social media seem detached from physical reality (the “digital dualism” illusion), and sites are frequently committed to imposing real-names on users. But social media can be visceral. Your pulse can race, your stomach drop, as you check to see what has been said about you, to you. You can find yourself unable to tear yourself away from a screen in a chat, held cruelly in suspense as you wait for a response to a message that seems dumber and more misreadable as it hangs there. And as much as real name policies are imposed, alternate identities proliferate, even within the same profiles. The “real-name” identity anchors the creation of fantasized identities, gives them an online baseline from which to differentiate, become operant.

Intensive sharing on social media, then, can cease to seem a building up of a self but its dissolution. That’s not merely in the sense that the more information there is in an archive, the harder it is to assemble into a coherent identity; it’s also a phenomenological dissolution: The acts of engaging with social media become points of narrowed attentional focus, akin to the masochistic myopia that Baumeister notes in the literature. He cites Elaine Scarry to claim that pain destroys our will to consider symbolic meanings and abstractions — the essential components of social identity.

Each act of social-media participation plays on the level of symbolic meaning and identity, but awareness of the ongoing ramifications of this may be so overwhelming as to need to be deferred. More sharing defers that recognition while exacerbating the problem, in part because of that knowledge — the humiliation potentially inherent in sharing can evoke a sharp psychic pain of vulnerability that overwhelms itself. Sharing also figures as a gesture of seizing control of the moment in which pain and humiliation will be administered, and the anxiety can also be diverted to a “fantasy” version of the self that is being elaborated in online platforms and thereby disavowed. (The online self, the avatar, is vulnerable, not me — even if that avatar bears my real name and I occasionally identify with it fully and proudly.)

Baumeister’s analysis hinges on distinguishing between a qualitatively “high” and a “low” level of self-awareness. Judging by the following description, the “high” level sounds a lot like conventional, neoliberalistic use of social media to establish one’s flexibility, fitness, and capacity for projects by building up a network and an archive of self. The “‘low” level sounds like the zoned-out flow experience Schüll associates with poker-machine compulsives (more from me about that here). 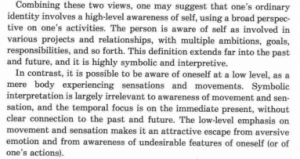 In social media, the archive can take on the roles of what Baumeister calls the “high-level awareness of self” so that we don’t have to and can lapse into self-annihilating flow instead by attuning to its rhythms of checking, updating, responding, waiting. Those rhythms are easier to find if we post a lot and post intense or risky or embarrassing things that can desubjectivze us through humiliation and/or pain. The platform’s constrictions take on the function of bondage, restricting autonomy to a limited set of actions.

But the key to social media’s masochistic potential is in how it seems to guarantee an audience. Baumeister notes that “use of mirrors or even audiences in S&M probably also intensifies the immediate, low-level awareness of self. Through the mirror or audience, the masochist’s attention is drawn to his or her immediate condition and predicament…the witness confirms the loss of self by conferring social reality.” Social media, of course, is both a mirror and an audience at once.

Masochistic acts of sharing are meant to invoke an audience, but not for the continuous, archived self — not for the ongoing, identity-signifying connotations of what is shared. Instead the audience is invoked to energize the obliteratingly powerful affect of the present moment by seeming to confirm its humiliating reality, the fantasy identity crystallized in that moment. One puts an aspect of oneself (actual or invented) out there to dream of it being mocked, and that pain of mockery disassociates us from the deeper vulnerabilities of the “real self” that is being deferred and protected for the moment.