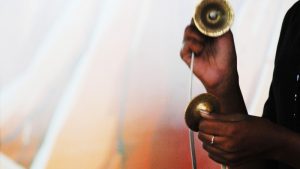 The skies overhead were overcast. Strong winds played with the hair of those walking along the ramparts. A light drizzle came and went as it pleased.

Far away, there was music.

It was coming from the recent Galle Music Festival, which brings together performers from the Northern tip, the Southern belt, the Eastern coast, the Western metropolis and the Central hills of Sri Lanka to a single stage in the city of Galle.

The diversity of the local performers is given the spotlight, and the event is a celebration of the talents and traditions that have been passed down from one generation to the next, through conflict and poverty. The performers that day, a few of whom are featured below, each brought with them histories of their people and were filled with the pride that comes with mastering and adapting their craft, whatever the genre.

They have travelled far, across a significant stretch of the country, from the town of Irakkamam in the Ampara district. The men are mostly old and graying, possibly telling of the fact that the group is yet to draw younger members of the community into the musical practice. One hopes this is not the case. 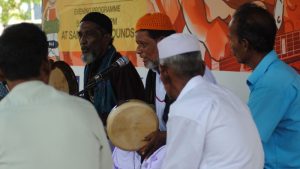 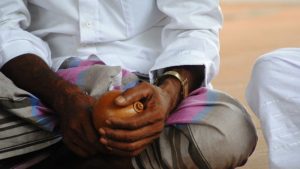 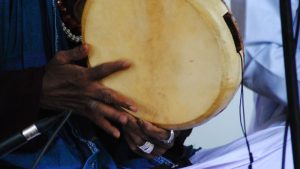 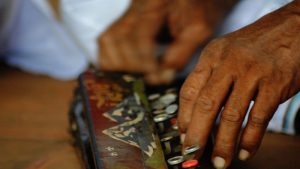 Their accompaniments are minimal – a few small drums, shakers, a tambourine, cymbals and a flat instrument reminiscent of the sarpina, producing a tune similar to something from the string family. It is their voices, in a devotional song based on the writings of ancient Sufi poets, that rise in volume and energy, their connection to the words and movement of the piece evident in the movement of their bodies.

Clad in black, an air of confidence emanating from them as they prepare to take the stage, the young students from the University of the Visual and Performing Arts make up what is one of Sri Lanka’s few all-female drumming ensembles. 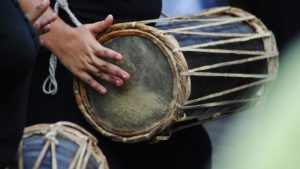 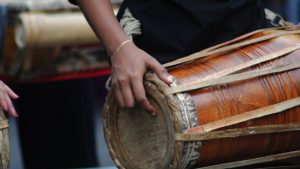 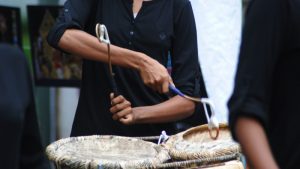 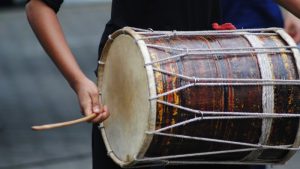 Aside from school-level bands, local percussion performances are a male-dominated category. Trained by Dinusha Sandamali Wijenayake, a young woman with a vast experience in local music, the Sandasi Drummers have ventured forth to make their mark as a force to be reckoned with. The girls speak with a passion for their music, telling of the time and commitment that has gone into perfecting the performance they gave.

The costumes catch your eye instantly, even as the performers are waiting in the wings for the show to begin. Two young men dressed as leopards, in bright orange overalls, and two more dressed as a man and woman, complete with long hair, a bow and a quiver of arrows. The skit begins with the leopards hiding in the forest – in this case, the patchy grass of a sports ground muddied by the day’s rain – and the antics that follow when two humans stray into the wild on a hunt. 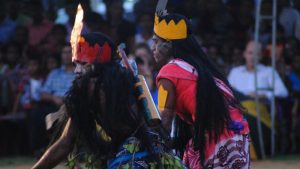 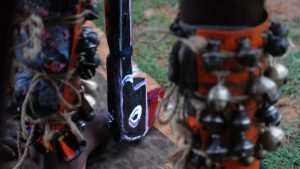 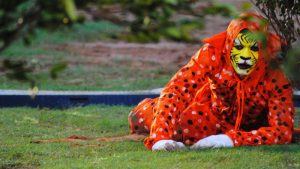 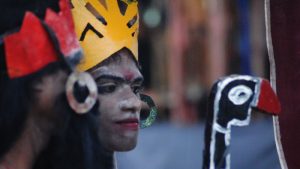 Koothu is a community artform that involves a small skit, accompanied by chanting voices and drumming of a small group of musicians. A dying practice that is seen along the Eastern coast, all the way up to the Northern peninsula, it is generally used to depict the stories from ancient Tamil epics but is not strictly limited to that. It takes on the character and practices of the village that is performing it, giving each performance distinct details. The young costumed actors are an indicator of the fact that slowly but surely, koothu is being taught to new generations.

The downpour has stopped for now, and the women are doing their best to prepare for the item. Makeup is brushed on, pottus are placed on foreheads and drums are quickly held to the flames of a fire lit on the damp ground, a quick quality-control measure for the sounds they are about to ring out. Their performance is fast-paced, smiles beaming on their faces as they beat their drums while, light on their feet, dancing to the rhythm of the song. 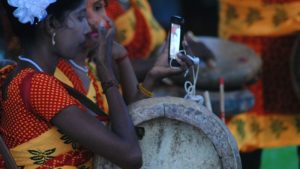 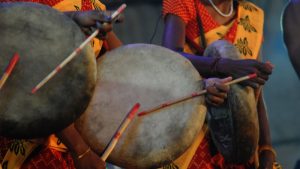 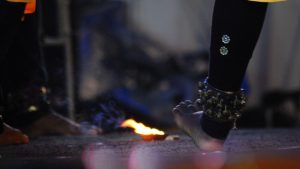 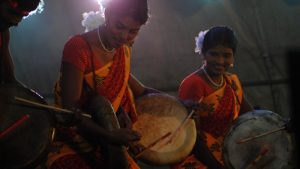 Kaveri Kala Manram, a women’s arts and cultural movement, began with the hope of using drama to begin conversations with those marginalised from society. Thirteen years and many displaced families later, it has expanded to address the needs of families resettling and rebuilding their lives in the North, scarred by years of fighting between government forces and guerrillas there. This process would be difficult enough for an individual, so the group brings the community together through song and dance, rebuilding both the individual spirit and the community strength.

The loud flute, closer in sound and strength to a trumpet, accompanied by a single drummer, cuts short to allow the narrator to drawl out the story being told. Standing along one edge of the stage are green and yellow faces with unblinking eyes that seem to stare beyond the soul. You’re disoriented for a second, shaking your head to remind yourself that it’s a face hewn out of wood. 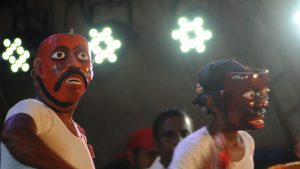 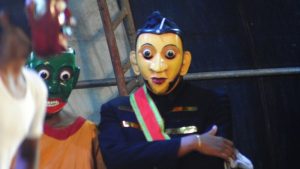 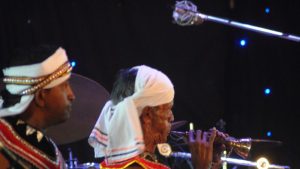 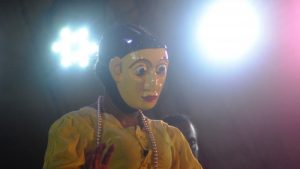 The drive down to the festival, if one had chosen to take the longer scenic route, cuts right through the birthplace of the mask and mask dancing culture in Sri Lanka. Tukkawadu Gunasena and his ancestors are identified as the pioneers of mask dancing in Ambalangoda, and this particular troupe can be traced 250-300 years back. This makes it one of the first kolam dancing groups in the area, and creations made by the carvers who crafted these masks can be seen at the National Museum for their iconic historical value.

The little girl balances precariously on the man’s shoulders. The pot of flowers balances on her head yet even as he turns, she sways her hands to the music, never once faltering in her step, the vase barely shaking on her head. Once lowered to the ground, she and her fellow dancers continue in their steps, all displaying the same light-footed confidence and balance in their movement. 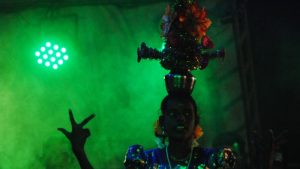 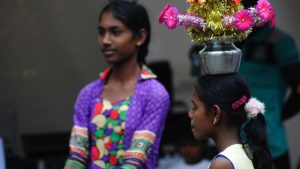 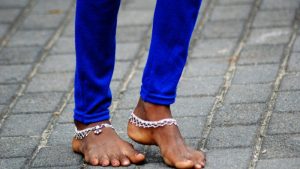 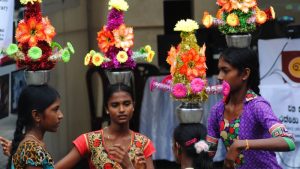 Karagam is a century-old form of dance that originated in the central hills, first created and performed by someone named Marimuttu. This group was missing the drums that they would traditionally use to accompany the dancers, having lost them in the movements and troubles that affected their communities in the last three decades. Having been able to find recordings of the music, they have now been able to resume their practices and performances of their art.

The crowd is invited forward, promising engagement and interaction with the rappers who are going to perform in the Sinhala and Tamil languages. The local youth mutter among themselves, not believing yet that good Sinhala and Tamil rap is possible. They are pleasantly surprised. OJ begins the set; hailing from Nuwara Eliya, he is dedicated to rap in his mother tongue, a connection that shows in his words and the passion in his performance 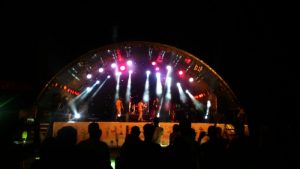 Pamuditha ‘Zen’ Anjana, a vocal online activist from Dematagoda, unapologetically expresses his views on current issues. Shafni, of the duo Krema Diaz, speaks about the life of a young person in Galle, accompanied by a catchy beat that gets the audience going.

Imaad Majeed, a poet, singer, rapper, songwriter with a heavy focus on social issues, joins the three for a collaboration titled ‘The Ballad of Wednesday Night’; a love song, essentially, one that talks about the social barriers that keep people apart. Class, race, religion, language divisions that they hope the younger generations will be aware enough to overcome.