Some of the country’s most respected public universities have been devastated by years of cuts, and corporations have stepped in to turn publicly funded education into private profit. 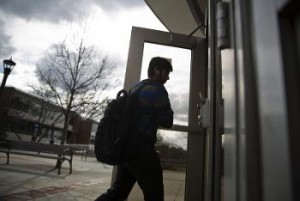 AUSTIN, Texas — Is education a right and a public good, or is it a commodity from which corporations can profit?

“Starving The Beast,” a documentary which premiered March 13 at the SXSW Film festival, reveals the struggle between these two paradigms for higher education taking place across the country at publicly funded universities.

From the University of Texas at Austin to the University of Illinois at Urbana-Champaign, decades of budget cuts have resulted in skyrocketing tuition alongside a simultaneous decline in the quality of education. Now Wall Street is moving into the gaps created by a largely Republican-created budget crisis, from the increasing reliance on private student loans as public funding falls to schemes to allow the accreditation of more for-profit universities, a move championed by Sen. Marco Rubio during his 2016 electoral campaign.

“I think there is a possibility to reverse this trend, and it starts with an awareness of the issue,” said the film’s producer, Bill Banowsky, during a Q&A session at the premiere at Austin’s Zach Theatre. “Before this film, I don’t think anyone had connected the dots.”

“Income share agreements” are one of the most disturbing outcomes of these trends revealed by the documentary. Meant as a conservative solution to the student loan crisis, under the Investing In Student Success Act, a bill sponsored by Rubio and Rep. Tom Petri, private corporations would agree to subsidize a student’s education. In return, the student would agree to pay back up to 15 percent of his or her income for up to 30 years after graduation.

“I’m afraid that students will become indentured servants,” one audience member, a professor, commented after the film.

Although many of the reforms are driven by fiscally-conservative think tanks like The Heritage Foundation and the Texas Public Policy Foundation, the conflict is ideological as well as financial. Many of the deepest cuts have come to social sciences and the arts — fields where professors have traditionally been most outspoken against the GOP agenda.

One especially telling move was the closure of the Center on Poverty, Work and Opportunity at the University of North Carolina at Chapel Hill last year. Gene Nichol, the center’s director and one of the film’s major subjects, was known for his vociferous and unflinching criticism of the effect of Republican policies on the poor.

“The university’s governing board moved to abolish an academic center in order to punish its director for publishing articles that displease the board and its political benefactors,” Nichol wrote in an email to Duke University’s student paper, The Chronicle. “Were I to have praised the legislature’s war on poor people rather than decry it, the board would have placed laurels on my head instead of boots on my neck.”

The concept of “disruptive innovation” was first coined by conservative scholar Clayton M. Christensen in 1995, and it’s frequently applied to technological developments, such as the way ride-booking services like Uber and Lyft are destroying traditional taxi businesses. Unfortunately, the film suggests this same idea is being applied to public colleges with disastrous results for students that need affordable access to learning.

“It comes down to the idea of whether students are consumers or whether they’re citizens,” said Steve Mims, the film’s director and a lecturer at Texas A&M University. “Disruptive innovation works great for technology, where you can buy an iPhone this year that’s better than the one that came out last year, but it’s a lot different in terms of education.”

When asked what could be done to restore public universities to their former glory, Banowsky responded that the public must to make it clear they wouldn’t stand for any more cuts.

“The first step is to stop digging the hole,” he said.