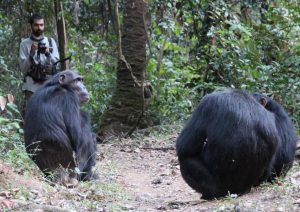 Do chimpanzee talk to each other? Scientists follow and record chimpanzees in the wild to find out – and to fill in details about how human language might have evolved. 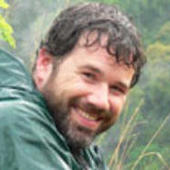 Freud, Wilkie and the other chimpanzees peacefully fed and rested in the sun-dappled Tanzanian forest. Mzee Hilali stood next to me, writing notes on the chimpanzees’ behavior, as he had been doing for over 30 years as a field assistant for Jane Goodall’s long-term study at Gombe National Park.

Suddenly, a strange, high-pitched call sounded from where some other chimpanzees were feeding, about a hundred meters from us. Hilali turned to me, and with a little laugh, said, “Nyoka.” This was the Swahili word for “snake.”

Freud climbed down from his tree and walked quickly toward where the call had sounded, with Hilali following close behind. As I slowly made my way through the undergrowth to catch up with them, Hilali called to me: “Chatu!” “Python!” 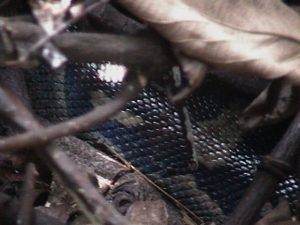 A glint of snake scales in the vine tangle.Michael Wilson, CC BY-ND

When I caught up with Hilali, he was pointing to a tangled mass of leaves and vines on the forest floor. I looked closely – most of the snake lay hidden from view, but the one visible stretch of black and tan scaly hide was too big to be anything but a python.

From years of experience, Mzee Hilali knew instantly that this particular chimp call meant they’d found a snake. Does this mean that chimpanzees have a “word” for snake? Do chimpanzees have a language of their own? I’ve been working with a team of students and Tanzanian field assistants to record and analyze chimpanzee vocalizations in an effort to answer questions like this. Ultimately we hope to learn more about how human language first evolved.

Clues to the origins of language

Chimpanzees are among human beings’ closest living relatives, and they share with us many unusual traits. Like humans, chimps make and use tools; join together in groups to hunt animals like monkeys; defend group territories; and sometimes gang up on and kill their enemies.

One trait that seems to set humans apart from every other species, however, is a fully developed language. Other animals communicate, but only humans appear able to talk about an unlimited variety of topics. Language enables us to make plans, negotiate with and teach one another.

How and why language evolved remains a mystery. Much of the evidence of human evolution comes from fossils, but fossil bones don’t tell us much about soft tissues or the sounds early human ancestors made. Studying the communication patterns of our living relatives can help solve the mystery. 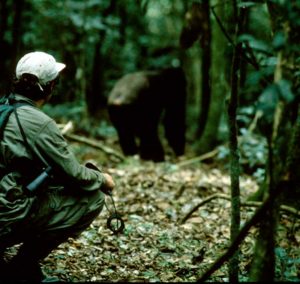 Recording in the forest

To investigate chimp communication, my colleagues and I follow chimpanzees through the forest as they go about their lives. We carry a hand-held “shotgun” microphone and a digital recorder, waiting for them to call.

Usually we pick a particular chimp to follow each day, trying to get equal numbers of calls per individual. In addition to recording new calls, we’ve been working to build an archive of recordings from other researchers, going back to the 1970s. The archive currently contains over 71 hours of recordings.

Snake alarm calls are intriguing, but because chimps don’t encounter large snakes very often, it is hard to do a systematic study of them. (Cathy Crockford and colleagues have done some interesting experiments, though, playing back recordings of these calls to see how chimpanzees respond and presenting them with model snakes). One thing chimpanzees do every single day, though, is eat. Chimpanzees spend most of their time looking for food and eating it. And when they find food, they often give a particular kind of call: the rough-grunt.

Biologist Lisa O’Bryan studied rough-grunt calls for her dissertation research with me. They vary from low, noisy grunts to higher-pitched calls. Some researchers have proposed an intriguing possibility: Maybe chimpanzees make distinct kinds of rough-grunt calls in response to particular foods, rather like words that name certain food items.

But Lisa has found that when eating any one kind of food, chimpanzees can produce a range of different rough-grunts. Rough-grunts thus tell other chimps that the caller is eating, but they don’t say what’s for dinner.

Just as a particular alarm call informs others that a snake has been found, the thin, wavering tones of a copulation scream announce that a mating has just taken place.

Why female chimpanzees sometimes give such a scream just as they finish mating remains unknown. Because the data collected by Mzee Hilali and other field assistants since the 1970s have been entered into a computer database, we can readily examine thousands of different mating events.

My student Tony Massaro has been analyzing these data to try to tease out what factors make females more likely to produce these calls. Such calls aren’t particularly word-like, but they do play an important role in communication. Like many wordless sounds that people make – think laughter, screams and crying – listeners hearing the sounds can infer quite a bit about the caller’s situation.

When Jane Goodall gives public talks, she often begins by giving a pant-hoot: a loud call that begins with an introduction, followed by a build-up, a climax and a let-down. Pant-hoots are loud and enable chimpanzees to communicate over long distances through the forest.

Previous studies have found differences in the pant-hoots calls from different regions. For example, the pant-hoots from Gombe sound a bit different from those made by chimpanzees in Mahale, 160 km away. When I played recordings of a single Mahale pant-hoot call to chimpanzees in Kibale Forest, Uganda, the Kibale chimpanzees acted as if they had just heard an intruder. If they were in a group with three or more males, they gave a loud vocal response and rapidly moved towards the speaker.

Response to simulated intruder with many males present.

If they were in a group with only one or two males present, though, they stayed quiet, and if they approached, did so slowly and cautiously.

Response to simulated intruder with only two males present.

For chimpanzees, correctly telling friend from foe is a matter of life or death, so it would make sense for chimpanzees in neighboring groups to have distinctive pant-hoot calls.

Cathy Crockford and colleagues found that pant-hoots from different communities within Taï Forest, Côte d’Ivoire, also sound distinct. If such group-level differences result from vocal learning, they would be rather like dialects in human languages. 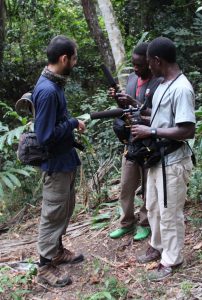 Nisarg going over how to use the recording equipment with Hashimu and Nasibu. Michael Wilson, CC BY-ND

My student Nisarg Desai has been testing whether this is also the case at Gombe. We’ve been working with a team of Tanzanian field assistants, Hashimu Issa Salala and Nasibu Zuberi Madumbi, to record calls from the Mitumba and Kasekela chimpanzees, and are starting to test for differences between groups.

We are in the early stages of this analysis.

From calls to language isn’t a clear path

Chimpanzees might be capable of some degree of vocal learning, but I’m struck by how subtle the differences in pant-hoot calls are from place to place. Chimpanzees make lots of different calls – pant-hoots, pant-barks, waa-barks, pant-grunts, rough-grunts, and so on – but across Africa, all chimpanzees produce a pretty similar set of calls in similar circumstances. In this respect, chimpanzee calls resemble human sounds like laughter and crying more than they resemble human words, which can vary drastically from place to place.

Chimpanzees communicate effectively with their various sounds, but in ways quite similar to those of other nonhuman primates. This suggests that our common ancestor with chimpanzees also had a fairly typical repertoire of vocal communication for a nonhuman primate. The really big changes in human language – such as a lifelong ability to learn to make entirely new sounds and a rich symbolic meaning of such sounds – likely evolved later, for reasons that we still don’t understand.