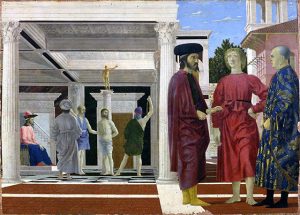 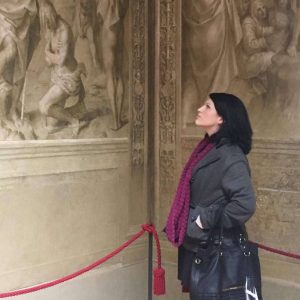 The subject of the Flagellation

Piero della Francesca’s Flagellation of Christ is proof that, sometimes, good things really do come in small packages. Despite the panel’s size (only 58.4 cm × 81.5 cm), the painting has been a mainstay in the last century in discussions of Quattrocento (fifteenth century) painting. An early example of the use of oil paint—though Piero used both tempera and oil in its execution—the work depicts the moment in Christ’s Passion when he was whipped before Pontius Pilate. Though the New Testament says very little about this moment, mentioning only that Pilate ordered Christ to be flogged, later Christian writers wrote much about the event, and even speculated about the number of lashes Christ received. Though the New Testament does not say that Christ was tied to a column while being whipped, during the fifteenth century this became a convention in depictions of the scene, which Piero here follows.

A masterpiece of the early Renaissance

This painting is a masterpiece of the early Renaissance. The figures are expressive; especially noteworthy is the face of the bearded man in the foreground. They are also given real volume through the use of modeling (the passage from light to dark over the surface of an object). True to Humanism, the painting shows a preoccupation with the Classical world, as seen especially in the architecture and inclusion of the golden statue in the background. Above all, Piero’s obsession with perspective (the naturalistic recession in to space), is evident. In fact, the artist was the author of a treatise on perspective, entitled De Perspectiva Pingendi (On the Perspective of Painting) and was also known as a mathematician and geometer.

Who are the men in the foreground? 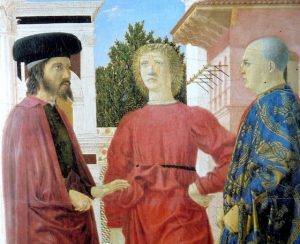 But Piero della Francesca’s picture is also highly unusual. The flagellation, which is the gruesome main event, takes place in the background, while three extraneous men are painted prominently in the foreground. Piero uses two main devices to further emphasize the division of subjects. The first is setting. While the flagellation takes place inside of a covered courtyard with dramatic black and white checked tiles, the men are outdoors standing on the reddish tiles that pervade the scene. The second is the use of the orthogonal lines of the perspective, which divide the painting in half, and also delineate the interior and exterior space.

Not only is the painting strange because Piero marginalized the primary subject, relegating it to the back of the painting, but also because art historians cannot agree on who the three men in the foreground are. Theories abound.

The traditional identification of these three men is that the young man in the center is Oddantanio da Montefeltro, ruler of Urbino, flanked on either side by his advisors.  All three of these men were killed in a conspiracy. In this case, it is suggested that the patron of the painting was Federigo da Montefeltro (who was later immortalized in a famous diptych by Piero) to commemorate his brother’s death and compare his innocence to that of Christ.

Art historian Marilyn Lavin offered another notable interpretation of the painting. She suggested that the two older men are Ludovico Gonzaga and a friend, who had both recently lost their sons, symbolized by the young man in the center. The painting in this case would compare the pain that the two fathers felt to that of Christ during his Passion.

Other art historians have suggested that the painting is an allegory for the suffering of Constantinople after its fall to the Muslims in 1453. In this view, the two men watching the flagellation are Murad II (the Islamic sultan who waged a decades-long war against Christianity), and Byzantine Emperor John VIII Palaiologos (against whom that war was waged). The emperor had gone to the 1438 Council of Florence to ask for protection from the Muslims, but received no aid. The three enigmatic men, then, represent nobles who stood by and let the Christian nation be destroyed. 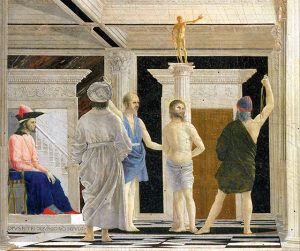 Still another interpretation suggests that the key to understanding the painting lay in the lost inscription on the frame, which putatively said, “Convenerunt in unum,” or “They come into one.” This is a line from the Bible that was traditionally read each year on Good Friday, the day that commemorates Christ’s Passion. “They” would refer then to the Sanhedrinists, or councilmen of Israel, who were present during Christ’s suffering. In this way of looking at the panel, Piero did not include a contemporary political message, but rather painted a narrative that is true to the text, and depicts exactly what it purports to, the flagellation of Christ.

The enigmatic nature of Piero della Francesca’s Flagellation underscores the fact that works of art, regardless of their age, continue to engender interesting art historical research. In the case of this painting, it is unlikely that a definitive interpretation will ever be accepted, as there is little documentation to support a single argument. Perhaps this ambiguity is partially why the painting continues to intrigue, and, almost 600 years later, grants multiple entry points to the viewer, drawing him into Piero’s fictional world. 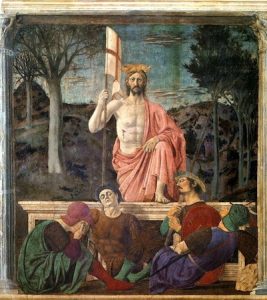 Although Da Vinci’s Last Supper is perhaps the most famous fresco that was nearly destroyed during World War II, the people of the Italian town Sansepolcro in Tuscany contend that they, in fact, hold the most important work spared in the war. For this, they can thank commanding British artillery officer and great appreciator of art, Tony Clarke, who was supposed to raze the city, but defied orders—having read Aldous Huxley’s comment that Sansepolcro was home to the best painting in the world. Huxley, of course, was referring to Piero della Francesca’s famed fresco, The Resurrection.

A relic of the holy sepulcher 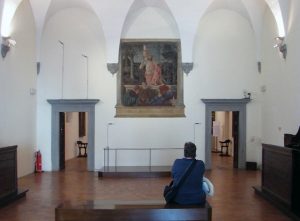 Piero painted this fresco around 1463 in the civic hall of Sansepolcro, which had been occupied by the Florentines but was recently returned (the Italian city-states were often at war). The subject matter then—the triumphant Christ arising from his tomb the third day after his death—may be a reference to the triumph of the town itself, which was named after the Holy Sepulcher (Sansepolcro in Italian, and the Holy Sepulcher is the tomb that Christ was buried in). The presence of the large stone in the lower right hand corner of the fresco supports this, as it possibly represents the relic of the sepulcher (the burial place, in this case of Christ) putatively brought to Sansepolcro by the saints who founded the town, Arcano and Egidio.

An interest in more than naturalism

Unlike other paintings by Piero (The Flagellation for example), The Resurrection is less interesting iconologically than it is formally; that is, art historians are less concerned about what it might mean than what it actually looks like. Although The Resurrection is often depicted by having Christ emerge from a cave from which a boulder has been “rolled away,” Piero instead chose to show Jesus stepping out of a Roman sarcophagus. In the foreground of the painting, the Roman soldiers ordered to guard the tomb have all fallen asleep. The position of their bodies is quite interesting. The reclining soldier certainly could never actually maintain that pose while sleeping in real life, and his comrade next to him, holding the lance, doesn’t even have legs. These two details show that Piero was more concerned about achieving a pleasing composition than being true to life.

Also noteworthy is that, although we know that Piero was the author of a major treatise on perspective and was also a mathematician and geometer, the painting contains two vanishing points (the point at which all the lines of the painting should converge).  On one hand, we see the faces of the soldiers from below, but on the other hand, the face of Christ is painted straight on. If the perspective were consistent throughout the painting, we would see all the faces from the same vantage point. Again, Piero has sacrificed realism for effect.

Perhaps the most striking feature of Piero’s fresco is the physical reality of the people he paints. Piero has been lauded as one of the first painters of the Renaissance to capture realistic faces that show emotion. In fact, Giorgio Vasari, the great sixteenth century art historian and painter, reported that the face of the soldier in brown armor was a self-portrait of Piero. Although there is no way of knowing if this is true—and Vasari is known for not always being accurate—his inclusion of this detail underscores the fact that Piero’s human figures are not just made-up “types,” but contain a spark of individuality that makes them feel like they are based on observations from real life. This is one of the major differences between Renaissance and Medieval art, and is partly why Piero is considered one of the great early Renaissance painters. 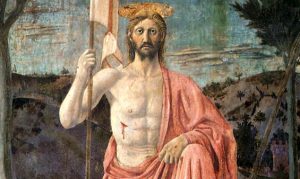 Piero has organized the figures so that an isosceles triangle is formed from the top of Christ’s head, through the soldiers, to the lower corners of the paintings. In addition, a tree is placed almost-symmetrically on either side of Jesus. This emphasis on geometric order and harmony is typical of the Renaissance, as best exemplified by paintings such as Raphael’s School of Athens, and Leonardo’s Last Supper. 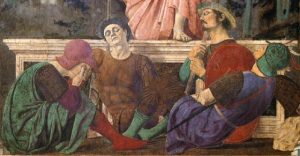 Also characteristic of Piero’s work is the mass of the bodies, an effect achieved in a variety of ways. Perhaps the most obvious is the stalwart pose of Christ, who appears anchored to the tomb by both his left leg and the flag in his right hand. At the same time, he seems to actively be using the flagpole and the hand on his knee to raise his other leg out of the tomb. The flexed muscles of his abdomen also emphasize the reality of Christ’s body, which is physically engaged despite the serenity of his face. 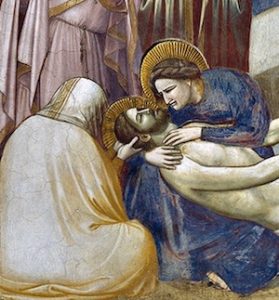 The complex positioning of the soldiers’ bodies also adds to this feeling of mass. Piero overlaps the men, intertwining their feet, so that they appear to exist in real space. The abdomen of the soldier in brown also echoes that of Christ, lending him an even greater sense of realism. The soldier all the way to the left, whose body is curled almost into a ball and whose face is hidden, is reminiscent of a similar figure in Giotto’s Lamentation, who is also used at the corner of the painting to anchor the eye and add weight to the composition.

Not many of Piero’s paintings have survived, and the ones that do exist are scattered around the globe; few are in major museums. However, it is certainly worth the train ride from Florence to see this gem of the early Renaissance. And when you do, be sure to remember to thank Tony Clarke, without whom this painting would have become a pile of dust.

The Man who Saved the Resurrection from BBC News

Polyhedra and plagiarism in the Renaissance