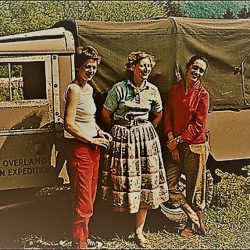 They called their adventure the Women’s Overland Himalayan Expedition. Antonia Deacock, Anne Davies and Eve Sims were three rather extraordinary women who, when in their mid-twenties and thirties, set off overland from England to Tibet in 1958.  Their aim was climbing one of the Himalayas’ unexplored high peaks. They made the 16,000-mile drive to India and back,[…]