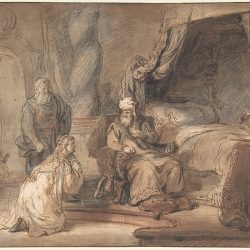 Allegedly around 1000 BCE, David was the eighth son (and youngest) of Jesse, from the tribe of Judah. Introduction According to biblical tradition (and some say myth), David (c. 1035 – 970 BCE) was the second king in the ancient United Kingdom of Israel who helped establish the eternal throne of God. A former shepherd,[…]