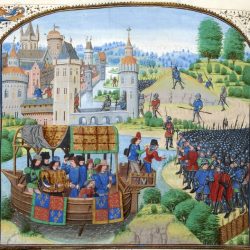 The consequences of the revolt were limited. By Mark CartwrightHistorian Introduction The Peasants’ Revolt, also known as the Great Revolt, was a popular uprising in England in June 1381 CE. Beginning in the south-east and spreading to London and elsewhere, the rebellion’s leaders, who included Wat Tyler, did not want to remove King Richard II of[…]