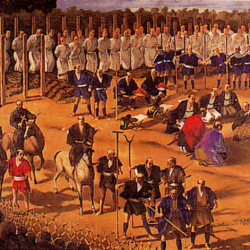 After the Battle of Sekigahara in 1600, central authority fell to Tokugawa Ieyasu, and the Shogunate began. Introduction The Tokugawa Shogunate, also known as the Tokugawa Bakufu (徳川幕府) and the Edo Bakufu (江戸幕府), was the last feudal Japanese military government, which existed between 1603 and 1867.[3] The head of government was the shōgun,[4] and each was a member of the Tokugawa clan.[5] The Tokugawa shogunate ruled from Edo[…]