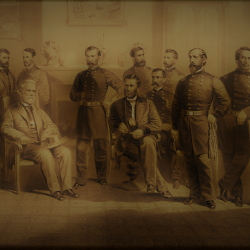 From the beginning of the war, Merrick was suspected of disloyalty. The American Civil War was not just a conflict between North and South. Indeed, many smaller conflicts pervaded both sections of the divided nation. In the South, for example, Jefferson Davis had to deal with noncompliant and obstructive governors in North Carolina and Georgia.[…]