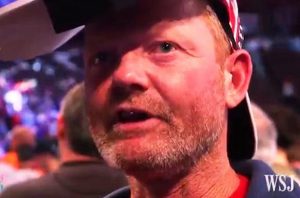 The threat of violence during this presidential election is unprecedented in modern American history.

While at a Trump rally in Ohio, Wall Street Journal Reporter Jason Bellini encountered an individual who will likely find himself under investigation by the United States Secret Service. After he agreed to remove his Donald Trump mask, Dan Bowman told Bellini that he is ready to fight in a disturbing “movement” to take our elected leaders out of power.

This is a threat for which the system of rules governing our elections set by our founding fathers is meant to prevent. One of the amazing things about our American system is the peaceful change of power through our elections. And, that is exactly the system for which Donald Trump and some of his most ardent supporters are ready to burn to the ground through their threats of violence and undermining of our electoral process.

Bowman told the WSJ, “I feel like Hillary needs to be taken out. If she gets into government, I’ll do everything in my power to take her out of power.”

“What does that mean?” Bellini questions.

Bowman quips, “Take it any way you want to take it.”

“That sounds like a threat,” Bellini says. Which prompts Bowman to come out with this doozy:

“I won’t have to myself. Well, there’s going to be probably a movement to where we will go and take them out of power.”

“It sounds like you are saying it’s acceptable to assassinate a president,” Bellini replies.

For which Bowman answers with a question of his own, “If she’s corrupt, why should she be able to stay in office? Answer that question.”

The answer to that question is simple. If Hillary Clinton is elected to office, she will stay in office because that is who the American people chose to be President. There are systems in place to remove a president from office IF there is misconduct and those systems do not involve armed citizens removing leaders. That’s the beauty of our system.

Civics classes cover the basics of our political system. Unfortunately, the teachings of those classes have been trumped by paranoia and speculation while rallying around the second amendment, seemingly the only constitutional amendment these people know.

This isn’t the first time Bowman has voiced his hope of Clinton’s assassination to reporters. He also told the Boston Globe reporters:

“If she’s in office, I hope we can start a coup. She should be in prison or shot. That’s how I feel about it. We’re going to have a revolution and take them out of office if that’s what it takes. There’s going to be a lot of bloodshed. But that’s what it’s going to take. . . . I would do whatever I can for my country.”

While the thought of a coup may be a wet dream for the Second Amendment patriots who have dreamed of having a tyrannical government they can overthrow, it is a frightening prospect that is as anti-American as they come.