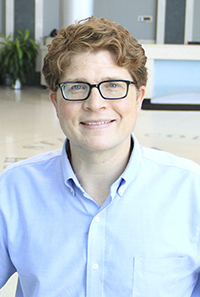 The Emperor Constantine, called Constantine the Great, was significant for several reasons. These include his political transformation of the Roman Empire, his support for Christianity, and his founding of Constantinople (modern day Istanbul). Constantine’s status as an agent of change also extended into the realms of art and architecture. The Triumphal Arch of Constantine in Rome is not only a superb example of the ideological and stylistic changes Constantine’s reign brought to art, but also demonstrates the emperor’s careful adherence to traditional forms of Roman Imperial art and architecture.

Reconstruction of the location of the Arch of Constantine (lower left) and the sculpture of the Colossus of the Sun (center)—both situated between the Temple of Venus and Roma (far left) and the Flavian Amphitheater (Colosseum—right), model © 2008 The Regents of the University of California; image © 2008 The Board of Visitors of the University of Virginia. Courtesy Dr. Bernard Frischer (Rome Reborn 2.0)

The Arch of Constantine is located along the Via Triumphalis (Triumphal Way (the exact route is disputed) was the route taken by triumphal processions that celebrated a victorious general and his army, often with booty and prisoners) in Rome, and it is situated between the Flavian Amphitheater (better known as the Colosseum) and the Temple of Venus and Roma. This location was significant, as the arch was a highly visible example of connective architecture that linked the area of the Forum Romanum (Roman Forum) to the major entertainment and public bathing complexes of central Rome. 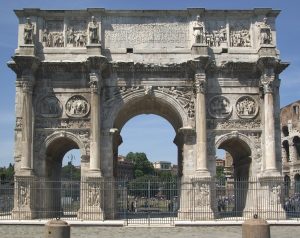 The monumental arch stands approximately 20 meters high, 25 meters wide, and 7 meters deep. Three portals punctuate the exceptional width of the arch, each flanked by partially engaged Corinthian columns. The central opening is approximately 12 meters high, above which are identical inscribed marble panels, one on each side, that read:

To the Emperor Caesar Flavius Constantinus, the Greatest,
pious, fortunate, the Senate and people of Rome,
by inspiration of divinity and his own great mind
with his righteous arms
on both the tyrant and his faction
in one instant in rightful
battle he avenged the republic,
dedicated this arch as a memorial to his military victory

The end of the Tetrarchy 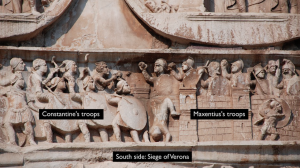 Frieze with Constantine’s siege of Maxentius’s troops at Verona (before the Battle of the Milvian Bridge), Arch of Constantine (south side) , 312-315 C.E. and older spolia, marble and porphyry, Rome

Beginning in the late 3rd century, the Roman Empire was ruled by four co-emperors (two senior emperors and two junior emperors), in an effort to bring political stability after the turbulent 3rd century. But in 312 C.E., Constantine took control over the Western Roman Empire by defeating his co-emperor Maxentius at the Battle of the Milvian Bridge (and soon after became the sole ruler of the empire). The inscription on the arch refers to Maxentius as the tyrant and portrays Constantine as the rightful ruler of the Western Empire. Curiously, the inscription also attributes the victory to Constantine’s “great mind” and the inspiration of a singular divinity. The mention of divine inspiration has been interpreted by some scholars as a coded reference to Constantine’s developing interest in Christian monotheism. 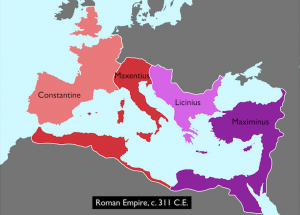 Perhaps the most striking feature of the Arch is its eclectic and stylistically varied relief sculptures. Some aspects of the sculpture are quite standard, like the Victoria (or Nike) figures that occupy the spandrels above the central archway or the typical architectural moldings found in most imperial Roman public and religious architecture (below). 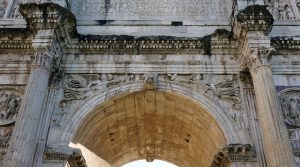 Other sculpted elements, however, show a multiplicity of styles. In fact, most scholars accept that many of the sculptures of the arch were spolia taken from older monuments dating to the 2nd century C.E. Although there is some scholarly disagreement on the origins of the sculptures, their imperial style corresponds to those of the reigns of Trajan (ruled 98-117 C.E.—the figures surmounting the decorative columns), Hadrian (ruled 117-138 C.E.—the middle register roundels), and Marcus Aurelius (ruled 161-180 C.E.—the large panel reliefs on the top registers). Most of the reliefs feature the emperors participating in codified activities that demonstrate the ruler’s authority and piety by addressing troops, defeating enemies, distributing largesse, and offering sacrifices. 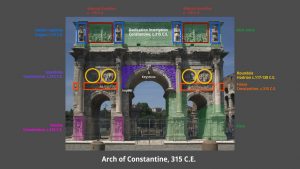 Some sculptural elements of the structure also date to Constantine’s reign, most notably the frieze which is located immediately above the portals. These relief sculptures are of a drastically different style and narrative content when compared with the spoliated (older, borrowed) sections (below, left); Constantine’s relief sculptures (below, right) feature squat and blocky figures that are more abstract than they are naturalistic.

The Constantinian reliefs also depict historical, rather than general events related to Constantine, including his rise to power and victory over Maxentius at the Milvian Bridge. There is also a scene of Constantine distributing largesse (funds) to the public—recalling the scenes of emperors from the earlier sculptures. 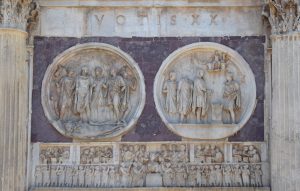 Reliefs from the south side of the Arch of Constantine. Roundels, Aftermath of a lion hunt (left) and Sacrifice to Hercules (right), era of Hadrian, c. 117-138 C.E. and the frieze below, showing the Distribution of Largesse, era of Constantine, 312-315 C.E.

Regarding style, the relief figures from Constantine’s age still seem like outliers. Yet in comparison to the idealized naturalism of the earlier sculptural elements (for example, in the roundels in the image below), the thick, bold outlines of the Constantinian figures render them remarkably legible to passersby. While the Constantinian figures lack natural aesthetics, their clarity of form ensured that they were informative and communicated Constantine’s official (and celebrated) history to viewers of his own time.

Until relatively recently, art historians viewed the blocky sculptures and use of spolia in the arch as signs of poor craftsmanship, deficient artistry, and economic decline in the late Roman Empire (this reading is now almost wholly rejected by art historians). Even one of the most prolific and influential art historians of the modern age, Bernard Berenson, titled his short book on the arch, The Arch of Constantine: The Decline of Form. More recently, however, analysis of the arch has focused on the political and ideological goals of Constantine and the objectives of the artists, which has highlighted new possibilities for the interpretation of the arch.

If, indeed, the spoliated (older) material from the arch can be traced to the reigns of Trajan, Hadrian, and Marcus Aurelius, then it situates Constantine as one worthy of the same level of reverence as those emperors—all of whom earned deserved levels of acclaim. This was vitally important to Constantine, who had himself essentially bypassed lawful succession and usurped power from others. Moreover, Constantine encouraged major social changes in Rome, such as decriminalizing Christianity. Any religious change was a threat to the ruling and political classes of Rome. By aligning himself with well-regarded emperors of Rome’s 2nd-century C.E. golden age, Constantine was signaling that he intended to model his rule after earlier, successful leaders.

Byzantium (ca. 330–1453) on The Metropolitan Museum of Art’s Heilbrunn Timeline of Art History

Bernard Berenson, The Arch of Constantine: The Decline of Form (London: Chapman & Hall, 1954).

Jaś Elsner, “From the Culture of Spolia to the Cult of Relics: The Arch of Constantine and the Genesis of Late Antique Forms,” Papers of the British School at Rome 68 (2000), pp.149–184.

Mark Wilson Jones, “Genesis and Mimesis: The Design of the Arch of Constantine in Rome,” The Journal of the Society of Architectural Historians 59 (March 2000), pp. 50–77.