Measuring twenty inches high and almost 230 feet in length, the Bayeux Tapestry commemorates a struggle for the throne of England between William, the Duke of Normandy, and Harold, the Earl of Wessex (Normandy is a region in northern France). The year was 1066—William invaded and successfully conquered England, becoming the first Norman King of England (he was also known as William the Conqueror). 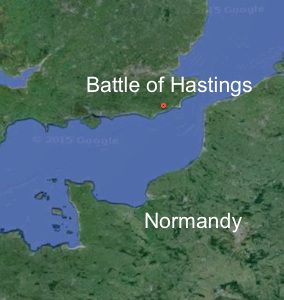 Map showing the location of the Battle of Hastings

The Bayeux Tapestry consists of seventy-five scenes with Latin inscriptions (tituli) depicting the events leading up to the Norman conquest and culminating in the Battle of Hastings in 1066. The textile’s end is now missing, but it most probably showed the coronation of William as King of England. 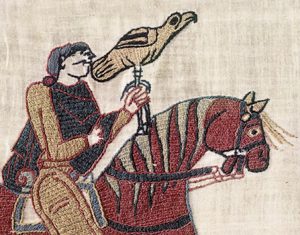 Although it is called the Bayeux Tapestry, this commemorative work is not a true tapestry as the images are not woven into the cloth; instead, the imagery and inscriptions are embroidered using wool yarn sewed onto linen cloth.

The tapestry is sometimes viewed as a type of chronicle. However, the inclusion of episodes that do not relate to the historic events of the Norman Conquest complicate this categorization. Nevertheless, it presents a rich representation of a particular historic moment as well as providing an important visual source for eleventh-century textiles that have not survived into the twenty-first century. 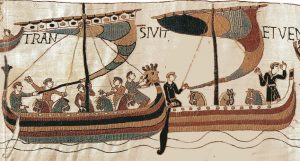 The Bayeux Tapestry was probably made in Canterbury around 1070. Because the tapestry was made within a generation of the Norman defeat of the Anglo-Saxons, it is considered to be a somewhat accurate representation of events. Based on a few key pieces of evidence, art historians believe the patron was Odo, Bishop of Bayeux. Odo was the half-brother of William, Duke of Normandy. Furthermore, the tapestry favorably depicts the Normans in the events leading up to the battle of Hastings, thus presenting a Norman point of view. Most importantly, Odo appears in several scenes in the tapestry with the inscription ODO EPISCOPUS (abbreviated “EPS” in the image below), although he is only mentioned briefly in textual sources. By the late Middle Ages, the tapestry was displayed at Bayeux Cathedral, which was build by Odo and dedicated in 1077, but its size and secular subject matter suggest that it may have been intended to be a secular hanging, perhaps in Odo’s hall. 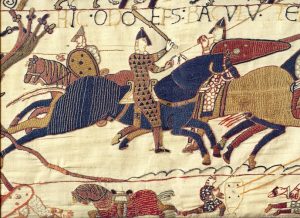 The inscription (partially cut off in the reproduction above) above Odo reads, “Here, Odo the Bishop, with a staff (baculum) encourages the young warriors,” Bayeux Tapestry, c. 1070, embroidered wool on linen, 20 inches high (Bayeux Museum)

We do not know the identity of the artists who produced the tapestry. The high quality of the needlework suggests that Anglo-Saxon embroiderers produced the tapestry. At the time, Anglo-Saxon needlework was prized throughout Europe. This theory is supported by stylistic analysis of the depicted scenes, which draw from Anglo-Saxon drawing techniques. Many of the scenes are believed to have been adapted from images in manuscripts illuminated at Canterbury. 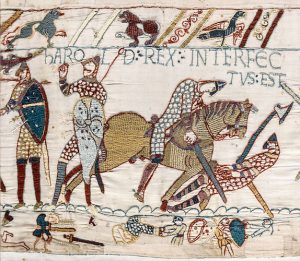 The artists skillfully organized the composition of the tapestry to lead the viewer’s eye from one scene to the next and divided the compositional space into three horizontal zones. The main events of the story are contained within the larger middle zone. The upper and lower zones contain images of animals and people, scenes from Aesop’s Fables, and scenes of husbandry and hunting. At times the images in the borders interact with and draw attention to key moments in the narrative (as in the image above of the battle).

The seventy-five episodes depicted present a continuous narrative of the events leading up to the Battle of Hastings and the battle itself.  A continuous narrative presents multiple scenes of a narrative within a single frame and draws from manuscript traditions such as the scroll form. The subject matter of the tapestry, however, has more in common with ancient monumental decoration such as Trajan’s Column, which typically focused on mythic and historical references.

The embroiderers’ attention to specific details provides important sources for scenes of eleventh-century life as well as objects that no longer survive. In one scene of the Normans’ first meal after reaching the shores of England, we see dining practices. We also see examples of armor used in the period and battle preparations. To the left of the dining scene, servants prepare food over a fire and bake bread in an outdoor oven (above). Servants serve the food as the tapestry’s assumed patron, Bishop Odo, blesses the meal (below). 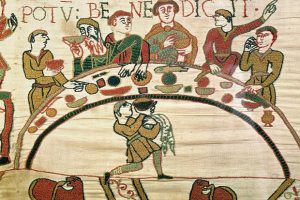 Norman’s first meal in England, at the center is Bishop Odo, who gazes out as he offers a blessing over the cup in his hand.(detail), Bayeux Tapestry, c. 1070, embroidered wool on linen, 20 inches high (Bayeux Museum)

Immediately after dining, William and his half-brothers Odo and Robert meet for a war council. Preparations for battle flank both sides of the first meal episode. Here we see visual evidence of eleventh-century battle gear and the construction of a motte-and-bailey to protect the Normans’ position. A motte-and-bailey is a fortification with a keep (tower) situated on a raised earthwork (motte), surrounded by an enclosed courtyard (bailey). Images of battle horns, shields, and arrows as crucial ammunition shed light on military provisions and tactics for the time period.

William’s tactical use of cavalry is displayed in the “Cavalry” scene. The cavalry could advance quickly and easily retreat, which would scatter an opponent’s defenses allowing the infantry to invade. It was a strong tactic that was flexible and intimidating. Although foot soldiers are included in the tapestry, the cavalry commands the scene, thus presenting the impression that the Normans were a cavalry-dominant army. 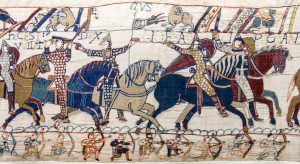 In addition to depicting military tactics used in the Norman Conquest, the scene also provides visual evidence for eleventh-century battle gear. Cavalrymen are shown wearing conical steel helmets with a protective nose plate, mail shirts, and carrying shields and spears whereas the foot soldiers are seen carrying spears and axes. Representations of the cavalry show that the soldiers were armored but the horses were not. The brutality of war is evident in the battle scenes. Figures of mortally wounded men and horses are strewn along the tapestry’s lower zone as well as within the main central zone. 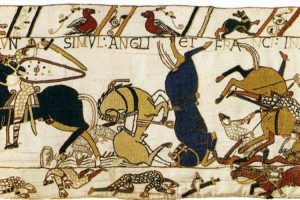 The Bayeux Tapestry provides an excellent example of Anglo-Norman art. It serves as a medieval artifact that operates as art, chronicle, political propaganda, and visual evidence of eleventh-century mundane objects, all at a monumental scale. This astounding work continues to fascinate.

The BBC’s David Dimbleby describes the historical significance of the Bayeux Tapestry for his BBC One Series, Seven Ages of Britain.

The title “Bayeux Tapestry” (1066-82) is a bit of a misnomer — the textile is embroidered wool on linen, and not actually a woven tapestry. The wool was dyed using the plants Woad, Madder, and Rocket. The linen canvas measures 20 inches in height by 230 feet in length (50 cm x 70 m), and supports the narrative embroidery that tells of the Norman invasion of England — though very much from the Norman perspective.

The tapestry depicts Duke William of Normandy’s conquest of Harold Godwinson — England’s new and ill-fated King. The conquest is portrayed as fully justified, and Harold is represented as an opportunist who broke his oaths to Edward the Confessor, former King of England, and to William himself. Although first known as William the “Bastard” (he was the illegitimate son of Robert the Magnificent and Herleva of Falaise), a name change accompanied his military success: he became known as William the “Conqueror.” The Norman conquest is a key turning point in Western history, and the English language still reflects this dominance of French over Saxon culture.