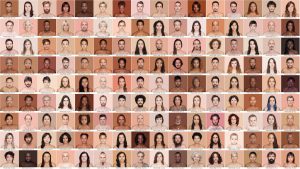 By cataloging every conceivable human skin tone, Angélica Dass illustrates that skin color and race are more complex than they might appear at first glance.

Angélica Dass’s photography challenges how we think about skin color and ethnic identity. In this personal talk, hear about the inspiration behind her portrait project, Humanæ, and her pursuit to document humanity’s true colors rather than the untrue white, red, black and yellow associated with race.

As a member of a multi­racial family, Brazilian artist Angélica Dass is acutely aware of how small differences in skin tone can swell into large misconceptions and stereotypes about race.

In her ongoing project Humanæ, Dass pairs thousands of portraits of people from diverse parts of the world with their Pantone codes, revealing that our racially­ charged skin color labels –­­ red, white, brown –­­ as not only inaccurate but also absurd. Instead, she shows us that “these colors make us see each other as different, even though we are equal.”