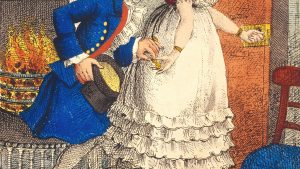 In 14th-century London, Church leaders discovered how to make a tidy income from sex workers.

By Dr. Kate Lister / 06.05.2018
Lecturer in the History of Sexuality
Leeds Trinity University

Wherever there have been people buying and selling sex, there have been laws trying to suppress, regulate or profit from it, and medieval London was no different. Attempts to control the sex trade in the capital can be traced back to at least 1310, when a royal command ordered all brothels be closed down, and the customs of the city declared that any ‘common woman’ (often implying a sex worker) caught staying within the city walls would be punished with 40 days in prison.

Looking around Soho today, it’s obvious that these early measures to suppress sex work were unsuccessful. By the late 14th century, sex work in London was tolerated as long as it was restricted to two areas: Cokkes Lane (now Cock Lane in Smithfield), within the city walls, and Southwark, a district then outside the city, but within the jurisdiction of the Bishop of Winchester.

Although the medieval Church condemned vice, they also viewed sex work as a necessary evil that protected ‘respectable’ women from the lusts of men. St Augustine (354–430), for example, is quoted as saying: “Suppress prostitution, and capricious lusts will overthrow society.” St Thomas Aquinas (1225–74) allegedly compared the sex trade to a sewer in a palace: “Take away the cesspool and the palace will become an unclean and evil-smelling place.” Of course, the ecclesiastical courts continued to punish people for engaging or selling sexual services throughout the medieval period, but the Bishop of Winchester was quick to realise just how lucrative such ‘cesspools’ could be. 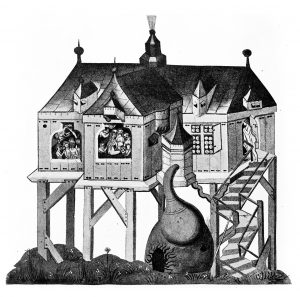 Medieval brothels were commonly known as ‘stews’ or ‘stewhouses’, as they were once bathhouses where you could literally stew yourself in the hot water. Historically, wherever you have had public bathing, sex has been working up a lather at the heart of it, and the bathhouses were known to be places where one could purchase considerably more than a soap-on-a-rope. In fact, the word ‘bagnio’, meaning a brothel, derives from the Latin balneum or ‘bath’. Of course, not all bathhouses were brothels, but by the early 1400s, all stews (naughty or nice) were banned from the City of London, and so set up shop across the Thames in Southwark.

The Geese that Laid the Golden Eggs

Considerable evidence survives about life in the Southwark stews because of a remarkable document, drawn up in the 15th century, which allowed the Bishop of Winchester to sanction and profit from sex work in his jurisdiction. The ‘Ordinances Touching the Government of the Stewholders in Southwark under the Direction of the Bishop of Winchester’ sets out 36 regulations for those working in the stews, and the fine each infraction would incur. So profitable did this venture prove that the sex workers of Southwark came to be known as ‘Winchester Geese’. Along with the right to demand rent, the bishop was expected to impose law and order on the “light-tailed housewives of the banks”.

In an effort to give the Ordinances more credibility, the bishop claimed they dated back to 1162, writing that they were passed “in the parliament held at Winchester in the eighth year of the reign of King Henry II”. This is impossible as there was no parliament at this time, but the document itself has been dated to the 15th century. Naughty bishop.

The Ordinances cover everything from what a ‘single woman’ (sex worker) can wear, through to her sleeping arrangements, working on religious holidays, and whether she could also sell pies to boost trade. Pastries aside, many of the regulations were designed to protect sex workers from being exploited by the stew owners. For example, A3 stipulates that any stewholder forcibly detaining a woman will be fined 100 shillings. While B11 states that “women who live by their bodies” cannot be forced to board at a stewhouse but must be allowed to board wherever they choose (fine: 20 shillings). And item B4 forbids any house from allowing either married women or nuns to work there (fine: 12 pence).

One of the harshest punishments was reserved for women who had a lover who they supported financially (otherwise known as a pimp). For this, the woman would be subjected to three weeks in prison, fined six shillings, dunked on the “cucking stool”, and banished from the area. 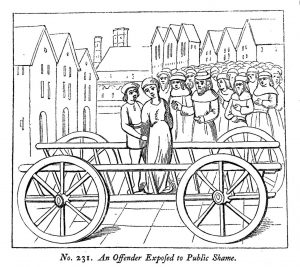 An offender (of prostitution) exposed to public shame

There were also regulations to protect customers from being fleeced by the wily geese. Item B2, for example, prohibits brothel owners holding “any man against his will within his house as prisoner for any debt that he owes” (fine: 20 shillings). No woman with “burning disease” was allowed to work in the stews (B25), and item B7 prohibits women physically dragging men in from the street (fine: 20 shillings).

The End of the Bishop’s Bonus

The voices and experiences of the sex workers themselves are frustratingly absent from surviving records, and we have no way of knowing how the geese themselves felt about the Ordinances. Given that a sizable chunk of the bishop’s annual income would have been made up of the fines levied against sex workers and stewholders, not to mention the rent, we can make a guess at how he felt about all of this. Perhaps I am wrong. Perhaps the incumbent bishops all felt deeply conflicted about upholding Church teachings around sexual sin while simultaneously profiting from the sex trade, but given the Ordinances were in force for around a hundred years, I can’t help but doubt that.

It was Henry VIII who finally put an end to the bishop’s sex racket in 1546, when he ordered the closure of the Southwark stews. Of course, this didn’t abolish the sex trade. The geese simply packed up and moved to new areas of the city. They moved to Cokkes Lane, Petticoat Lane and Gropecunte Lane in Cheapside; the names alone are testament to the prevalence of sex work in medieval London, and a reminder that abolition tactics have never worked. A lesson we seem to be taking a painfully long time to learn.