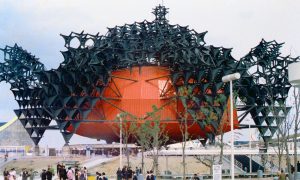 One of the great laboratories of the future and its side-effects is science fiction. ‘The wall flickered partially out of existence as he stepped through to the corridor,’ wrote Arthur C Clarke in his novel The City and the Stars (1956), ‘and its polarised molecules resisted his passage like a feeble wind blowing against his face.’

Typical of the symbiotic relationship between science fiction and fact, Clarke seems to have got this idea from the physicist Richard Feynman, who in 1945 predicted the possibility of molecular engineering. Feynman argued that any material could one day be constructed from the atom up – and, moreover, that complex miniscule mechanisms (‘nanobots’) would become viable, ‘a billion tiny factories, models of each other, which are manufacturing simultaneously’. It was conceivable not just that concrete, for example, would be strengthened with polymers but that it could come to resemble a living substance, mutating on demand. And then where would that leave architecture?

Time passes differently for buildings. Eero Saarinen differentiated the ‘elephant time’ of architects from the writer’s ‘rabbit’ time. One of the central tensions of architecture is how the brevity of human life, let alone fashion, collides with the longevity of stone and steel. Flux is an unavoidable characteristic of modern urban life. How do we anticipate, guide or simply survive this tendency?

One answer has been to embrace it. ‘The fundamental characteristics of futuristic architecture,’ pronounced the 1960s London-based avant-garde group Archigram, ‘will be expendability and transience. Our house will last less time than we do, every generation must make its own city.’ In Japan, there is a longstanding tradition (wabi-sabi) of facing transience. Inspired by the Ise Grand Shrine, which is dismantled and rebuilt every 20 years (remaining always new and always old), Kisho Kurokawa of the Metabolists proposed architecture ‘growing… as a constantly changing process. Impermanent beauty, immaterial beauty… a new aesthetic based on movement’.

The problem the radicals confronted was a view of what the future city should be because of what it has been. Despite recent flirtations with ‘blobism’ and amoeba-like biomimetic shapes, we remain wedded to the idea of architecture as solid, permanent, averse to evolution. This has remained the case even during the modern era. The big problem with Brutalism was perhaps not so much its controversial aesthetics as its inability to develop; when form follows function, and then function changes, what are we left with? Yet the purpose of buildings often changes; think of the Hagia Sophia in Instanbul.

Buildings are simply structures that are built. They remain so regardless of the material used. What we take for granted as natural was first invented and then developed over millennia. In ancient Çatalhöyük, people entered houses not through the design innovation of the door but through a hole in the roof. In the same spirit of continual refinement, there have been many attempts to move beyond our present way of thinking. A recurring vision of contemporary futurologists is of apartments in which partitions move around to maximise and pluralise limited space. At its flimsiest, this resembles set design, but it might become a much more fluid process.

To go further, we need to ask what architecture is. For the Blur Building, Elizabeth Diller, Ricardo Scofidio and Charles Renfro shrouded a platform in Lake Neuchâtel in Switzerland in a haze of water droplets. It is a building made of mist, using computers to monitor and adapt the structure according to climatic conditions. Sean Lally has proposed an architecture that does not just inefficiently contain energy but rather is made from it. Challenging ideas might simply be those whose time has not yet come. Retrospect often makes prophets of the curious.

Let’s elaborate Arthur C Clarke’s prophecy a little. Nanobots would create a programmable architecture that would change shape, function and style at command, in anticipation or even independently. Imagine an apartment where furniture fluidly morphs from the walls and floor, adapting to the inhabitants, an apartment that physically mutates into a Sukiya-zukuri tea-room or an Ottoman pleasure palace or something as yet unseen, while outside the entire skyline is continually rearranging itself. Architecture might become an art available to all.

The advantages of nanomaterials are already becoming apparent; consider the strength of graphene, the insulation of aerogel. The idea of a self-repairing, pollutant-neutralising, climate-adapting ‘living’ architecture no longer seems the preserve of fiction. Resistance to the idea of buildings that could grow (as in John Johansen’s forms) or liquefy (like William Katavolos’s designs) is almost as much a question of our conservatism as of technical limitations. But as the materials scientist Rachel Armstrong has observed, this vision of the city as a biological or ecological manifestation is not so much a leap into the unknown as a maturation of ancient Vitruvian ideals.

Every advance will have repercussions. The idea of walking through walls that simultaneously scan us for illnesses might sound promising – but what else will they monitor? Who will they answer to? What will it mean for human creativity, let alone employment, when there are buildings that can build themselves?

We might put any fears we have about nanotechnology down to an age-old terror of the unseen; the all-consuming, self-replicating nano-swarm of ‘grey goo’ is akin to a viral pandemic; the fear of continual surveillance is the fear of a watchful omnipresent god. Yet these fears are, at their root, simply a fear of ourselves; what our rulers and indeed we would do with such power. Perhaps the fears are well-placed; the recent Volkswagen emissions scandal, in which cars were engineered to deceive their investigators, seems like one portent of the emerging Internet of Things. The US and Russian militaries have employed nanotechnology to improve the transmission of energy in explosives, meaning that certain future buildings and their inhabitants definitely won’t remain solid. The problem, as ever, is that, while technology changes, human nature remains the same.