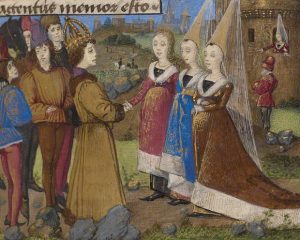 The Emperor Sigismund Arriving in Siena in The Story of Two Lovers with texts written in Latin by Eneas Silvius Piccolomini and illuminations by an unknown artist, French, about 1460-70. The J. Paul Getty Museum, MS. 68, FOL. 25

Examining costumes in the pages of medieval manuscripts.


At times, the clothing seen in manuscript illuminations reflected the actual styles and fabrics of the Middle Ages—but at others, the outerwear we see is purely fanciful or given an idealized twist.

Let’s look at the above image depicting an imaginary story about two lovers set in 15th-century Siena, Italy.

The Tale of Two Lovers was originally written by Aeneas Silvius Piccolomini, an Italian from Siena, in 1444. At the time, he was serving as secretary to Frederick III, the Holy Roman Emperor, in Vienna. The story opens with the previous Holy Roman Emperor, named Sigismund, travelling to Siena with a sizable entourage. Among the group is a young French nobleman, Euryalus. The royal party meets several young Sienese women, among them the beautiful (and married) Lucretia. An amorous tale unfolds as Euryalus tries to convey his love to Lucretia (read the full version here to find out the ending).

If this story were made into a film, a costume designer could carefully distinguish each character’s geographic origin through fabric, color, and regional style. But the Getty manuscript was made in France, and the costumes of the characters, with the exception of the emperor, are French—not Italian or German as the author specified.

Although such an inconsistency perhaps seems odd to us today, the image would have successfully communicated to a French reader the author’s description of the characters’ dress as the epitome of high fashion.

Aeneas Silvius describes the young man accompanying the emperor (identified by his golden hoop crown) as wearing clothes “stamped with gold, dyed with a brilliant purple, woven of the thread that is spun in farthest China.” Notice in the image that the young men all wear short tunics and brightly colored hose, but none appear to wear a patterned purple-gold garment.

Aeneas Silvius dedicated more space to his account of the protagonist, Lucretia, whom he describes as wearing the most elaborate forms of dress: “necklaces and brooches, girdles and bracelets, all were there, and marvelous fillets about her head.” He notes that her hair was the color of beaten gold, “bound up with gold and precious stones.” Two of the women wear pointy headdresses, or turrets, in the French style—but the one who shakes the emperor’s hand has golden hair and wears a necklace. She is therefore Lucretia. 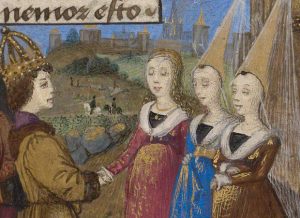 The Emperor Sigismund Arriving in Siena (detail) in The Story of Two Lovers with texts written in Latin by Eneas Silvius Piccolomini and illuminations by an unknown artist, French, about 1460-70. The J. Paul Getty Museum, Ms. 68, fol. 25

The ladies in the image are clearly fashionable by French standards rather than Italian ones. Fortunately, the Getty owns an Italian book of hours, or private prayer book, made around the same time, which allows us to compare Italian and French fashion.

One image in this book shows the manuscript’s patrons, Andrea Gualengo and Orsina d’Este, dressed in the Italian style: both have patterned silk sleeves, and the tunics worn by Andrea and his sons are a bit longer than those of the men accompanying the emperor in The Tale of Two Lovers. 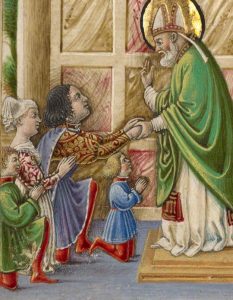 In short, The Tale of Two Lovers was made in France, based on a text originally written by an Italian, who at the time lived in the capital of the Holy Roman Empire (modern-day Austria). The geographic origin of the characters in the story makes up an equally diverse range, from Italy to France to a large territory north of the Alps. The author’s attention to details of fabric, color, and the overall ensemble during the introductory pages of the narrative is particularly striking when one considers that Aeneas Silvius would eventually become Pope Pius II!