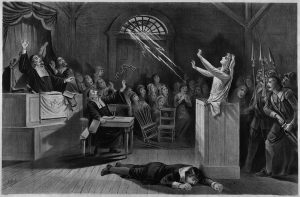 History is full of stories about curses spoken by prisoners, either rightfully or wrongfully convicted, on the way to their execution. The hexes were a prisoner’s supernatural retribution for perceived wrongs that the court dealt them.   This cosmic vengeance often resulted in disease or gruesome accidents that caused untimely, often violent, deaths of doomed individuals.  A curse’s infamy was reinforced by the number and gruesomeness of the fatalities.  Although the lore around some curses have a historical basis, archaeologists rarely find evidence for it.

Sarah Good was one of the first victims of the Salem witch trials that plagued Massachusetts from 1692 to 1693, and resulted in the execution of 20 people. Abigail Williams and Elizabeth Parris accused Sarah of using her supernatural powers to torment and possess their bodies. Good was arrested and emphatically denied the charges in court.  It should be mentioned that Sarah’s four-year-old daughter was also jailed for witchcraft at the same time as her mother, but was released at the end of 1692.  To make matters worse for Sarah, she gave birth to another daughter while in prison, but the baby did not survive.  Not many people could blame Sarah for leveling a curse against the very people who accused her of crimes she did not commit.