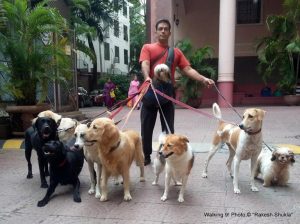 45-year-old Rakesh Shukla is a talented software engineer and CEO of a successful tech company, but among India’s animal lovers he is known as “The Dog Father”, an exceptional man who founded the country’s most advanced dog rescue center and who personally takes care of 735 abandoned pooches that nobody else wants.

10 years ago, Rakesh and his wife founded The Writers Block, a technical communication outsourcing company which today works with some of the biggest names in the tech industry – Intel, Microsoft, Oracle, etc.. The Bangalore-based company quickly became successful, and over the next few years the software engineer got to travel the world, buy expensive cars and lead the fancy lifestyle he always thought he wanted. But he still didn’t feel happy and fulfilled. It wasn’t until 2009, when Kavya, a beautiful Golden Retriever, came into his life that he truly felt that his life had meaning.

“When we got home, she went and hid in a corner. I got down to her level on the floor and I was calling out to her. She was looking at me, she was scared, but I could see she wanted to trust me,” Rakesh recalls about that fateful day. “And that’s when the moment happened – it was a physical feeling, my hair was tingling, I could feel a warm glow. And I’ve never needed to ask myself that question – ‘why am I here?’ – again after that.”

Something magical happened when Rakesh Shukla met Kavya. Three months later, he got a second dog, this time a stray called Lucky. He found her on the streets, wet and miserable, so he just brought her home. Over the next few weeks, whenever, Rakesh saw a stray or an abandoned dog, he just brought it home. The growing number of canines soon became too much for his wife to bear, so he moved most of them to his workplace, turning the top floor of his office building into a dog shelter. 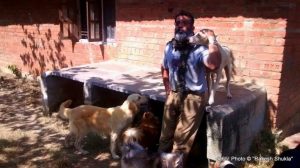 In 2011, following a major human-stray incident (the massive culling of stray dogs), he founded the Voice of Stray Dogs, a modern dog rescue organization working to support the strays of Bangalore. Today, it is the world’s largest citywide dog rescue. “VoSD rescue is essentially my private infrastructure that I opened to the city to save its dogs. Dogs that are my love. To do so I created the most automated and tightly managed rescue in the world,” Rakesh wrote in a lengthy Facebook post, last year. “My vehicles & people are GPS tracked. Each dog has a reference and exhaustive database entries and more. You get SMS’, emails, online access. There is no rescue app like the VoSD Rescue App in the world. There is no enterprise CRM like the VoSD CRM in the world. There is no individualised tracking like VoSD provides in the world.”

At the same time, he kept adopting stray and abandoned dogs, and by 2012 he realized he needed to set up a proper shelter for them. That year, Mr Shukla bought land in the neighboring Doddballapur town and set up a canine haven for dogs. Most of the residents are old or sick, while the rest are simply unwanted. Last time he counted them, Rakesh Shukla had 735 dogs in his care. 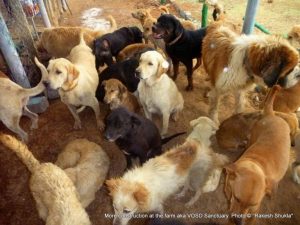 “I’m the last stop for these dogs. They are no longer cute and cuddly. Many are sick and no longer wanted,” Rakesh told the BBC. But that’s all the more reason to make their life as happy and comfortable as possible. To that end, the Dog Father spares no expense. His shelter employs a staff of about 10 people, including trained veterinary assistants, to feed and care for the animals. They are fed 200kg of chicken and 200kg of rice every day, and many of them receive constant medical treatments. The daily cost of running this unique haven runs between $650 and $750 a day, of which he personally provides 95%.

In his 2015 message to the city of Bangalore, Rakesh Shukla estimated that in the previous three years he had spent over $1 million of his own money to fund the Voice of Stray Dogs rescue. He had managed to rescue over 5,000 stray dogs in Bangalore, not to mention taking care of the hundreds that lived at his shelter permanently. But following a string of problems faced by his organization while providing the city a free service, he decided to change his approach and focus more on the hundreds of dogs in his personal care. While VoSD still operates in Bangalore, it’s not “a free lunch anymore”, so people who need a dog rescued have to pay a 2,500 rupee ($37) fee. 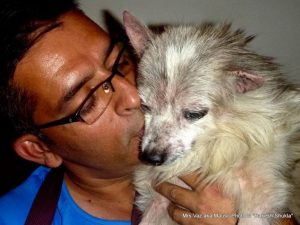 “Earlier, we entertained all calls, where many turned out to be fake. After a spate of bad experiences, we have decided that whoever wants to have a dog rescued has to register online and pay a nominal amount of Rs 2,500 per dog, ” Rakesh told The Economic Times. “This way , we will know that they are serious about what they want to do.”

Rakesh Shukla is viewed by many as a hero, and a human champion of stray and abandoned dogs in Bangalore, but not everyone has been supportive of his efforts. In the past, he has been sabotaged by so called animal activists who demanded access to his dogs and facilities, has received complaints that he is creating public unrest by keeping so many dogs, and some have even demanded that he shut down his shelter.

He plans to do no such thing though. “I’ve made a pact with my dogs. We will part only when one of us kicks the bucket,” he says.