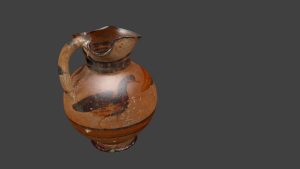 In recent years, there has been a flurry of new technologies emerging at a price which makes them (just about) affordable, notably 3D scanners and printers, and such technologies have attracted attention in the news of late for their employment in the digital recreation of artefacts and archaeological sites destroyed by IS. Indeed, 3D printing is a wonderful tool for bringing the past to life: Museum3D, for example, uses its 3D prints to engage museum visitors with low-vision and Alzheimer’s. However, as this post will show, 3D scanning is just as important to public history.

There are many methods to creating a 3D model. One of the most popular methods for amateurs is photogrammetry, where all you need is a good camera and a modern computer. Thankfully, museums the world over have been engaging with such technologies, and have also been pretty generous in making their scans freely available: for example, the Smithsonian hosts some online via AutoDesk, while the British Museum has a collection freely available for download from Sketchfab, either to admire on a screen, or to print out (Links to these collections, as well as some other great examples, are listed below).

However, this general rule of ‘scan and share’ is not as straightforward as one might expect. Recently the daring-do deeds of Nikolai Nelles and Nora Al-Badri have sparked wider debates, not just about whether museums have a public right to share their artworks and artefacts, but also about issues of acquisition and repatriation. These two artists visited the Neues Museum in Berlin and covertly 3D scanned the famous bust of Nefertiti (or so they claim). In some museums this sort of public driven documentation is actively encouraged. The New York Met encourages visitors to take scans, and the British Museum has hosted “scanathons” to create a crowd-sourced digital archive, and is holding a digital workshop for teens in 3D scanning skills on the 24th April (free to attend, though booking advised).

However, at the Neues Museum the bust of Nefertiti is restricted from being photographed at all by visitors, let alone being scanned and uploaded online. All this has led to international news coverage, sparking debate about the various issues concerning creative commons and copyright in the heritage sector, as well as the Neues Museum’s acquisition of the bust. Having highlighted some of the difficult issues that the creation and dissemination of 3D models of museum objects can create, it is time to focus on the way such models can promote the ancient world in new and exciting ways to an ever expanding audience.

Firstly, the digital sphere allows a level of interaction which moves beyond that of a casual visit to a museum. Sitting on your sofa, you can now view the finger-marks of an ancient potter on a Roman red-slip plate, rotate the plate, change the direction of lighting, and see the form of the object in a manner difficult, if not impossible, to replicate in 2D. In fact, even some museum display cases make it difficult to view an object as a 3D entity, with only one side being displayed. Furthermore, without extremely generous funding, it would be impossible to travel the globe viewing all objects of interest (the Roman plate below resides in Australia, for example).

Nonetheless, 3D scans and 3D-printed replicas can never replace their non-pixelated ancestors. The detail required for the academic study of objects often requires seeing and handling an artefact in person (and applying for travel grants). In this regard, 3D collections can complement museum visits. A case study published in 2013 showed that the use of a ‘virtual museum’ not only encouraged users to visit the museum, but had a positive impact “before, during, and after a visit.” As with any form of translation (for 3D scans translate from the physical to the digital), when we view 3D scanning as both an educational tool and a tool for engagement, the intended audience is a key factor in driving the creative process.

Gamification as part of engagement and education is a sure-fire way to appeal to a broad spectrum of visitors. In fact, Sofia Romualo, a PhD student in Exeter is taking the principles of game design and applying them to the collections of the Royal Albert Memorial Museum. She says: “Gameful design is now used regularly for commercial and marketing purposes, but the way it can benefit museums hasn’t yet been explored widely…There is growing recognition that building upon the elements which make engaging – having goals, challenges, a storyline and role play – can help bring the past to life…”

With this in mind, the potential for museums and educators to create gamified 3D environments is huge, and is something with which I am trying to engage myself at the Ure Museum of Greek Archaeology. As the availability of 3D technologies increases, gamification is the development which may prove most effective at bringing history to new audiences. Using freeware such as Blender and Unity, we can create an end product from our 3D scans which will require the user to actively engage with them in order to progress and unlock more artefacts and features, though this is still very much a work in progress. However, in the meantime, our scans can be found online here.