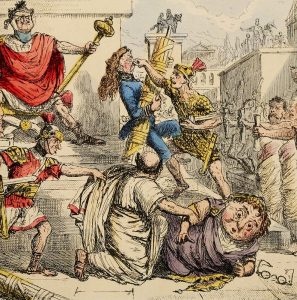 At the beginning of the 1850s, two stalwarts from the heart of London-based satirical magazine Punch, Gilbert Abbott à Beckett and John Leech, cast their mocking eye a little further back in time and published The Comic History of Rome. Caroline Wazer explores how it is not in the text but rather in Leech’s delightfully anachronistic illustrations that the book’s true subversion lies, offering as they do a critique of Victorian society itself. 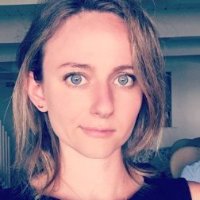 This article, The Eternal Guffaw: John Leech and The Comic History of Rome, was originally published in The Public Domain Review under a Creative Commons Attribution-ShareAlike 3.0. If you wish to reuse it please see: https://publicdomainreview.org/legal/

Drawn by caricaturist John Leech, the illustrations of Gilbert Abbott à Beckett’s The Comic History of Rome are a Victorian fever dream of ancient Rome. Senators pair their togas with top hats, generals wear muttonchops under their helmets, and priests styled as snake charmers draw gullible crowds with the help of coal-powered rotating billboards. The blending of past and present in Leech’s illustrations is on one level a simple visual joke that reinforces the humor of the text, dragging the glories of Roman history down to the level of the contemporary London street. A closer look at the context of the book, however, reveals a series of interesting tensions beneath the surface humor.

Leech and à Beckett first worked together on the staff of Punch, the satirical London periodical. First published in 1841, Punch quickly gained a reputation for capturing – and mocking – the cultural zeitgeist of Victorian London, from pompous politicians to the unwashed masses. Henry Silver, a Punch contributor, wrote in his diary in 1864 that Leech “sneers at the Working Man, as usual.” A staunch Tory, Leech frequently came into conflict with the more progressive members of the early Punch staff about the content of the magazine. His cartoons often portrayed the urban poor as stupid and the wealthy as frivolous. À Beckett, on the other hand, was a member of the progressive-minded Reform Club and earned a reputation for understanding and generosity when he served as Poor Law commissioner in 1849. 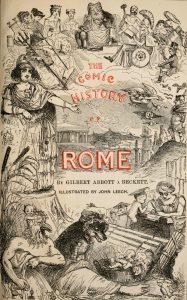 Title page for The Comic History of Rome – Internet Archive

While neither Leech nor à Beckett had attended university, both received a classical primary education. Amid the growth of both capitalism and urbanism in the Victorian period, such an education was increasingly important as a cultural shibboleth, distinguishing elite men from strivers when money alone was no longer enough to do so. Around the time of the birth of Punch, however, there arose a complicating factor to the use of familiarity with the classical past: the at-home educational publication. A result of cheap printing and increasing literacy, these publications – sort of the “For Dummies” books of their day – allowed anyone with a few pennies in his pocket access to knowledge previously kept locked up in elite schools.

The Punch staff initially took an eye-rolling stance at this democratization – and cheapening – of history and learned culture. One issue from 1843 included a satirical feature titled “History at One View,” which arranged major events according to the month in which they occurred without regard to year, producing a nonsensical historical hodgepodge. The feature proclaimed itself to be “arranged expressly with an eye to the Society for the Confusion of Useful Knowledge,” in a jab at the real and very earnest Society for the Diffusion of Useful Knowledge. Other targets of ridicule included bad schoolboy Latin and popular retellings of Greek and Roman mythology. 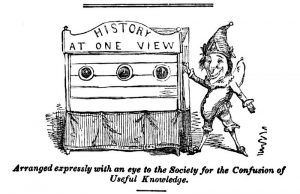 Punch soon stopped wrangling with the new climate of learning, at least in print. Some of the staff found this sneering attitude distasteful. As writer Douglas William Jerrold put it in an 1846 letter to his friend Charles Dickens, “The world will get tired (at least, I hope so) of this eternal guffaw at all things. After all, life has something serious in it. It cannot be all a comic history of humanity.”

À Beckett’s preface to The Comic History of Rome begins with a disclaimer. Despite the casual language and jocular tone, “this work has been prompted by a very serious desire to instruct those who, though willing to acquire information, seek in doing so as much amusement as possible.” Men like Jerrold who doubted the value of comic histories were “grievously mistaken who have imagined that in this… the object has been to treat History as a mere farce, or to laugh at Truth.”

For his part, à Beckett mostly lived up to his word. He breezes through Roman history like a professor emeritus at a cocktail party, displaying both a gently dry sense of humor and a deep familiarity with the content and tricky nature of the ancient sources. He closes the first chapter as follows:

Before closing this portion of the narrative of the History of Rome, it is necessary to warn the reader against believing too much of it. The current legends are, indeed, Legenda, or things to be read, because everybody is in the habit of repeating them; but the student must guard himself against placing credence in the old remark, that ‘what everybody says must be true,’ for here is a direct instance of what everybody says being decidedly otherwise. The life and reign of Romulus, are to be taken not simply cum grano salis – with a grain of salt – but with an entire cellar of that condiment, which is so useful in correcting the evil consequences of swallowing too much of anything. 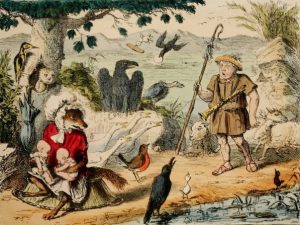 Leech’s images sometimes stick close to the text, as in the full-color plate that portrays the legend of Romulus and Remus as a Mother Goose-esque fairy tale. Often, however, Leech used his illustrations to draw explicit and sometimes cutting connections with modern Victorian life. The subject matter of the text, which covered Roman history through the fall of the Republic, certainly lent itself to comparisons with mid-nineteenth century London. Especially in the latter part of the period covered, Rome saw a booming poor urban population, the growth of a snobby urban intelligentsia, and the development of what many saw as overtly demagogical politics — in other words, the same things that Leech regularly skewered in the pages of Punch.

The subject of Roman history allowed Leech to make some satirical references too obscure or too reactionary for Punch’s pages. A color plate portraying a 5th century BC popular uprising against the patrician Appius Claudius Crassus following his abduction of the plebeian Verginia resembles nothing so much as a scene from the French Reign of Terror, complete with ragged street urchins and a stout cat-wielding proletarian wearing a Phrygian cap. 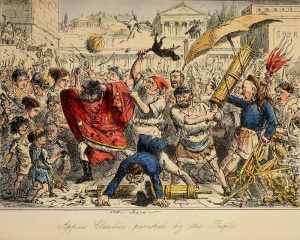 More frequently, however, Leech used the Roman setting simply to poke fun at familiar urban characters, particularly the working classes. In the images below, Leech portrays the revered Greco-Roman healing god Aesculapius as a crotchety old apothecary, and a Carthaginian soldier as a timid municipal policeman. 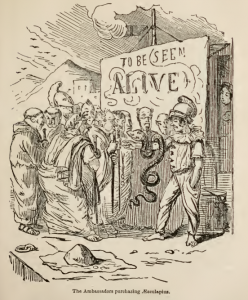 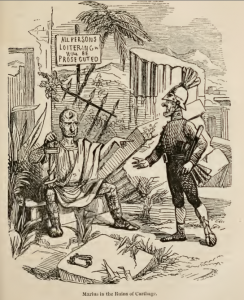 Another favorite target was the rich man who, whether out of desire for power or cultural cachet, overinvolved himself with the poor. In one illustration, Tiberius Gracchus, a populist Roman reformer, becomes a top hat-wearing, baby-cheek-pinching demagogue, seedily winning popular favor by charming poor women. 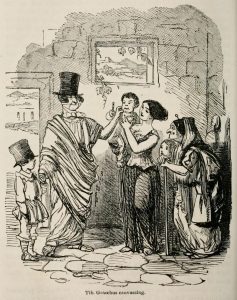 In another, Leech depicted a gladiator and his owner as a brutish modern-day boxer (note the gloves) and his foppish patron (note the dangling cigarette). 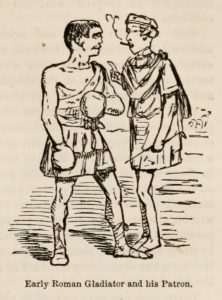 Back at Punch, Leech had developed a reputation for overwhelming the text with the approachability and humor of his illustrations. William Makepeace Thackeray, who frequently contributed to the magazine, once wrote that “John Leech is Punch.” A similar statement could be made about The Comic History of Rome, despite à Beckett’s earnest assertion that the book was not meant to make light of history. By projecting his satirical view of the present back onto ancient Rome, Leech injected a certain nastiness into The Comic History of Rome that echoed and reinforced his nasty view of the present.

It is easy enough to imagine a curious but uneducated middle-class Londoner enjoying à Beckett’s avuncular jokes, but what would he make of Leech’s illustrations? Possibly he would be offended, but possibly – conditioned by Punchand similar publications – he would take part in Leech’s eternal guffaw at society.

John Leech’s Pictures of Life and Character from the Collection of Mr.Punch (1887), by John leech.