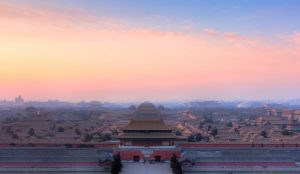 Explore the hidden origins of one of China’s most significant historic sites. 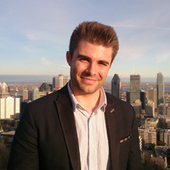 An ancient site rooted in the heart of modern Beijing, the Forbidden City is one of China’s most famous attractions. Completed in 1420, the city served as the palace of Ming Dynasty emperor, Yongle. Its walls surrounded an area large enough to contain more than 50 Buckingham Palaces, creating a private sanctuary which none but the emperor’s family and eunuchs were permitted to enter.

The Forbidden City became the seat of imperial power in China for almost five centuries and remains an important part of modern China’s cultural heritage today. But it is seldom mentioned that Yongle was not the first emperor to build in that location. In fact, underneath the streets of modern Beijing lie the remains of a much earlier palace.

More than 300 years before the Ming came to power, a walled city was built on the site of present-day Beijing. Entering that city’s gates, you would have been greeted by another, much taller, walled complex; it was within this city within a city, that you might have found the emperors of the long-forgotten Liao Dynasty.

I say “might have” for good reason, as the Liao had not one capital city, but five. The Liao maintained a capital in each of the four cardinal points of their empire and still had the resources to establish another one in the middle for good measure. The emperor and his court would travel between the cities throughout the year.

The name Beijing itself – literally translated as “Northern Capital”, is a reflection of its position within the Ming Empire. To the Liao, however, this same city was known as Nanjing, the “Southern Capital”, revealing a very different world order. 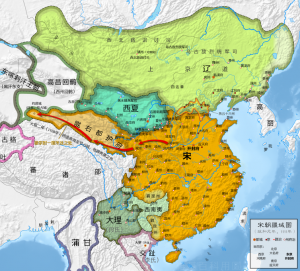 The Liao Dynasty depicted in green. 玖巧仔/Wikimedia commons, CC BY

With lands stretching from Inner-Asia in the west, into Mongolia in the north, and to the Korean peninsula in the east, the Liao Dynasty was one of the major political powers in East Asia from 907 to 1125. Yet this geopolitical influence is the least of the Liao’s achievements.

The Liao have left us some of the finest examples of Buddhist art and architecture in all of Asia. The 65-metre Yingxian Pagoda – the oldest surviving wooden Buddhist pagoda in China – remains one of the tallest timber structures in the world. The dynasty also established administrative structures that were used throughout China’s later imperial history. The precedent for the “one country, two systems” policy – whereby different laws and codes are applied to different regions of the country – which can be seen in Hong Kong and Macau today, could arguably be dated back to the Liao administration.

Despite these lasting legacies, if you were to pick up a book on Chinese history at random, the Liao Dynasty may not even get a mention. Timelines of China’s ruling dynasties frequently omit the Liao in favour of one of their contemporaries – the Song Dynasty. Yet records from the time demonstrate that the Liao and Song were political equals. A clue as to why the Liao are often lost from these historical accounts can be found by peering over those inner walls and into the palaces of the Liao’s five imperial capitals.

Rather than the imposing timber-framed halls of Yongle’s Forbidden City, the Liao imperial family would instead be found living in a series of grand tents. The people who formed the Liao Dynasty originally came from the steppes of north-east Asia and lived a semi-nomadic lifestyle. They were known as the Kitan and, like most nomadic groups, history has not treated them well.

Despite having their own written language, only a small number of Kitan texts survive today, and translating them is often difficult because there are no surviving languages similar enough to help linguists fully decipher the characters. As a result, finding the Kitan or the Liao voice in the historical record proves to be a challenge.

Most of the primary sources that modern historians have for the Liao period were written under the Song Dynasty. As the Liao’s direct political rivals, the Song sources are often less than flattering about the Liao Dynasty, and its Kitan leaders.

Unfortunately, this attitude towards the Liao has worked its way into later sources, keeping the dynasty in the shadows. This began to change when archaeological discoveries of the late 20th century generated new interest in Liao sites. For instance, the finds at the excavation of the tomb of Princess Chen, changed the way people viewed Liao elite culture. 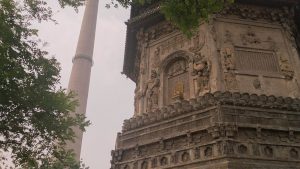 Gold and other precious metal artefacts from Liao tombs have become a major draw in public exhibitions around the world. Interest among private collectors is also rising. A small, gilt-bronze, Liao Buddhist statue recently broke the record for an Asian art auction at Christie’s in France, selling for €13,570,500.

With all of this renewed interest, academic studies of the Liao are reassessing the dynasty’s position in Chinese and wider Asian history. Historical texts are being challenged and progress is being made on the translation of the Kitan writing system.

If you visit Beijing today, just about the only evidence you will find of the Liao city is a single pagoda. An ancient monument – once the tallest building in the city – it is now dwarfed by the industrial chimneys that surround it. The history of the Liao Dynasty, in contrast, has never been more visible.