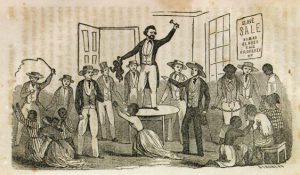 Splitting up a family at auction / Public Domain

The weeping time does not end with weeping; it ends with triumph. 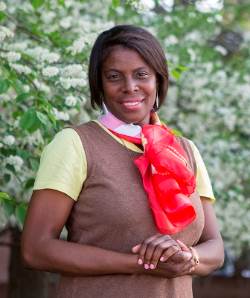 In 1859, more than 400 enslaved people – men, women and 30 babies – from the Butler plantation estates of the Georgia Sea islands were sold on the auction block in Savannah, Georgia.

My new book is about this sale, the largest slave auction in American history, which the slaves called, “The Weeping Time.”

This story, however, is not only about the past. Modern day descendants have been piecing together their own history and reclaiming their fragmented past.

It is a story of weeping but it is also a story of resilience.  In these troubled times, do people of African descent with a legacy of slavery have a testimony of resilience for a hurting world? 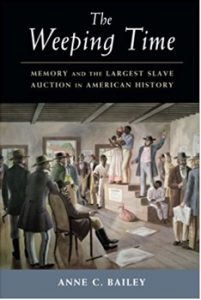 Slave auctions were long a part of the fabric of American life, but on the eve of the Civil War, this unprecedented sale was noteworthy not only for its size but because of the fact that the Butler slaves had generally not been sold on the open market.

As slaves, their lives were difficult and burdensome to be sure, but they were a part of a tight-knit community, the Gullah Geechee community, with its own norms, values and customs – some of which were informed by their African heritage.

This sale netted for the highly indebted owner Pierce Mease Butler a phenomenal sum of $303,850, displaced these slaves from their “home,” and separated them from their families.

On the auction block

Prospective buyers relentlessly poked and inspected the slaves. The highest price for one individual was $1,750 for a carpenter. The lowest price was $250 for an elderly slave.

Auctions like these took place all across the South and brought out a cast of characters: the auctioneer, “Negro buyers,” “Negro speculators,” slave traders all mixing with genteel Southern gentlemen. As many as 1.2 million slaves were sold in this domestic trade from the 1760s to 1860s.  New Orleans was a major locus but so was Savannah on the fateful days of March 2 and 3, 1859.

On offer were many cotton and rice field hands, but also carpenters, blacksmiths, mechanics, shoemakers and coopers. Rice and Sea Island cotton were the top commodities of the day so “hands” well versed in the cultivation of these crops were especially valuable. It was noteworthy that there were seven slave drivers among them.  Slave drivers had great authority over the slaves when either the overseer or the master was away, yet on the auction block, buyers treated them as just another slave – another commodity to be bought and sold.

In this auction, the story of two young couples stood out the most. Two slaves, Dorcas and Jeffrey, were engaged to be married but in spite of their desperate pleas to stay together, the auctioneer sold them to different masters. The other couple, Dembo and Frances, managed to find a minister amidst the buyers who married them, thus allowing them to be sold as one lot to the same plantation in Alabama.

It was a time of weeping, but for these slaves and their descendants, their story did not end on the auction block. The auction was but a chapter, albeit a devastating chapter, in their long history extending backwards to the African continent and forward to the present. The auction block neither erased that history nor eradicated their future. In two short years with the onset of the American Civil war, some of those sold enlisted in the Union army and fought for their own freedom.

Then immediately upon Emancipation in 1863, though freed without recompense for years of unpaid labor, many of these newly freed slaves set out on foot flocking to plantations all over the south searching earnestly for their loved ones. Some took with them a lock of hair, a swath of clothing – small mementos that they had saved prior to being sold.

In my study of census records, birth and death certificates, I found 15 percent of the original group sold on the auction block in the historical record. I also found several of their living descendants. Some moved West or during the Great Migration of the 1920’s, moved North in an attempt to make a new life.

Recurring threads include the great efforts of these families to stay close together (often in the same household); the importance of marriage and marital bonds; the growth of literacy and the eventual diversification of employment. Many were farmers and sharecroppers, but the record shows that eventually several secured jobs as railroad engineers.

Perhaps their greatest accomplishment, however, was their determination to restore and reestablish their family life. To put back together that which had been taken from them. To restore the breach. For that, they would win no awards or receive any honors, but their living descendants are the greatest testimony to this feat.

For these living descendants, the recovery process includes the creation of new memories in the present. Educators, public officials and the like, they are productive contributing members to American society who know who they are and where they are from.

The gift of resilience

They have a story to tell and it is one of resilience. Their story gives us hope. Their story reveals the coping mechanisms that kept generations of Black people with a legacy of slavery above water—faith, family, work, music and art. Those who sang the Negro spirituals – “Nobody knows the trouble I’ve seen” – in slavery and lived to sing “No more auction block for me” in freedom may have something to share with a hurting world.

Thanks to hard won gains in civil rights, many in the black community, like some of these descendants are doing well, but there still exists a persistent black underclass.  Mass incarceration and its disproportionate effect on Black and brown populations, in particular, is a legacy of this past. From the perspective of prisoners, perhaps one of the most troubling aspects of incarceration is the separation of families.

This separation is reminiscent of the auction block – loved ones torn apart for long or indefinite periods of time, children growing up without parents, particularly fathers, and women raising children alone.

So, yes, challenges remain, but so does the fact of a resilient past.

In the end, for those who know this history and for those who want to know it, hope and resilience are as tangible as the ballot box. They remind us of the 19th century reality of those four million emancipated slaves  – plus millions more in the Caribbean and South America – who in the words of ex slave, Felix Haywood, “seemed to want to get closer to freedom, so they’d know what it was –like it was a place or a city.”

In the 21st century, they are still making strides towards that city called Freedom. They have not reached there yet, as many of today’s sports heroes on bended knee are daring to say, but they are determined to get there on this side of heaven or the other.

And as they press toward that mark, they inspire us with their gift of resilience.