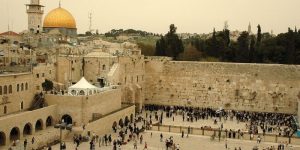 That Israel’s understanding of God changed over time is not a controversial claim. The biblical texts record significant changes very clearly.

From Henotheism to Monotheism 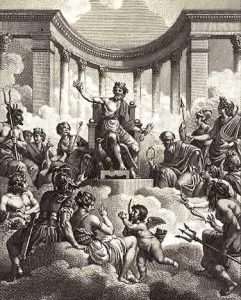 The twelve gods of the Greek Olympic pantheon with Zeus at the center reigning supreme (henotheism, acknowledgement of other gods but worship of one above all) / Wikimedia Commons

The terms henotheism and monotheism are both derived from Greek words meaning “one god,” but they have different implications. Henotheism refers to the worship of only one god, without denying the existence of others. This is sometimes also called monolatry. Monotheism, on the other hand, is the more radical claim that only one god exists; there are no others.

Careful readers have often noticed a gradual development from serving one god among many (henotheism) to the eventual claim
that there is only one God (monotheism).

Some of the earliest of Israel’s traditions present the Hebrew people as practicing henotheism. Judges 3:5—6, for example, says

Thus the Israelites lived among the Canaanites, the Hittites, the Amorites, the Perizzites, the Hivites, and the Jebusites; they took their daughters in marriage and gave their own daughters to their sons; and they served their gods (Judges 3:5—6, emphasis added).

The larger context treats this situation as undesirable (that is, the Israelites should not serve these foreign gods), but these early texts do not deny explicitly that these gods exist. In fact, this henotheistic perspective is reflected in very many of the earliest Hebrew Bible texts. Without claiming that other gods do not exist, the biblical writers call on Israel to reject those gods and worship only the one God of Israel.

The biblical writers admit freely that the ancestors of Israel worshiped gods besides Yahweh. They also remind the reader that after the people entered Canaan, they began to worship the gods of the local peoples—especially the agriculture and fertility gods Baal and Asherah—and the prophets again and again called them back to the worship of the One God, Yahweh, the LORD.

Over time this call to worship only the One God of Israel was strengthened, becoming a claim that the gods of other nations did not exist, and that the God of Israel is the God of all people. By the time of the eight-century prophets, we find clear evidence that the biblical writers hold a view closer to monotheism than henotheism or monolatry. By the eighth century BCE the gods of Israel’s neighbors are often called false gods—a designation that could mean either that they are untrustworthy or that they are non-existent. Amos 2:4, for example, reads

For crime after crime of Judah I shall grant them no reprieve, . . . They have been led astray by the same false gods their fathers followed (Amos 2:4, Emphasis added).

By the time of the Babylonian exile in the sixth century BCE, the call to a monotheistic view became clearly dominant. Anyone who
believes in a different god is confused according to these prophets. The supposed other gods are nothing but wood and stone.

The Hebrew Bible clearly reflects a move away from henotheism to monotheism. By the time the Roman period began, all forms of Judaism were clearly monotheistic.

The Names of God 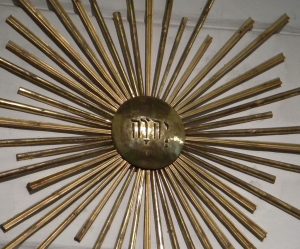 Even when the people were faithful to their God, they inevitably talked about the LORD in terms drawn from their own religious experience in Canaan. They talked about the LORD in ways that sounded a great deal like the way the Canaanites talked about El, the father of Baal and the other Canaanite gods. In fact, the people of Israel even adopted this name (El) as one of the names of the LORD. When Abram (later called Abraham) meets king Melchizedek of the Canaanite city of Salem, a priest of El Elyon (God Most High), the two of them treat El Elyon and Yahweh as one and the same (Genesis 14:17-24).

The Canaanite name El is often combined with other words to create compound names for God. Some of the most common ones are El Shadai (God Almighty or God of the Mountain), El Olam (Everlasting God), El Elyon (God Most High). In Genesis 16:7—14 God is also called El Roi (God of Seeing). These designations for God may reflect ancient local preferences for how to refer to El.

One of the names or titles of Israel’s God found frequently in the Hebrew Bible is Elohim. This word is somewhat curious because it’s grammatical form is plural. When the word elohim is used to refer to the gods of Israel’s neighbors, the verb that accompanies it is plural, and it is translated as “the gods.” When it is used to refer to the God of Israel, however, the verb is usually singular, and it is translated as “God.”

The name that would eventually become the definitive sacred name for Israel’s God is Yahweh. Like El, this name is sometimes used in combination with other words to form a compound name. In 1 Samuel 1:11, for example, the God of Israel is called Yahweh Tzebaoth (LORD of Hosts). Exodus 6:2—3, presents the God of the Hebrew people as claiming both Yahweh and El Shaddai as
legitimate names:

God also spoke to Moses and said to him: “I am Yahweh. I appeared to Abraham, Isaac, and Jacob as El Shaddai, but by my name Yahweh I did not make myself known to them.

By the Roman period the name Yahweh would be considered so sacred that many Jews would refuse to pronounce it in order to avoid using it in disrespectful ways. When they encountered the name Yahweh (spelled YHWH in Hebrew, hwhy) in the biblical text, they would say “Adonai” instead. Adonai is an Aramaic word meaning “Lord.” In this way the tradition of translating Yahweh as “the Lord” arose, and many English translations of the Bible continue this tradition as a way of showing respect for the divine name. The NRSV prints the word “Lord” in small caps as “LORD” when it is used to translate the Hebrew word YHWH.

Where Did the Worship of “Yahweh” Begin?

While the Hebrew people clearly shaped their understanding of Yahweh partly in reaction to the gods of Canaan, there is no clear evidence that the worship of Yahweh began there. We do not really know when people first began to worship Yahweh or where. We do know that the biblical writers cite earlier works about their God (such as the Book of Jashar in Joshua 10:13 and the Book of the Wars of Yahweh in Numbers 21:14), indicating a long history of development in the people’s understanding of their God.

It is possible, though not certain, that the name Yahweh was first used in the area of Midian, to the southeast of Israel. Exodus 3 locates Moses in this area when the name is first revealed to him. At this point in the story Moses is working for Jethro, his father-in-law, who is a Midianite priest.

When a person in ancient Israel thought of God, what idea of God did she have in mind? Did she think of God in the same way that people do today? If not, how was her understanding different? One way of approaching these questions is to think about the roles that God was assumed to play in ancient Israel. What was God expected to do? We could also ask, “What characteristics would a typical person assume that God had?” For example, would she assume God had the power to control nature? Would she assume God could know her thoughts? Would she assume God was kind, or aggressive, loving or vindictive?

God clearly played many different roles for ancient Israel. In Israel’s earliest history God was pictured as the divine warrior who defended his people. The “Song of Deborah” in Judges 5, the Song of Moses in Exodus 15:1—3, and the “Song of Miriam” in Exodus 15:21 all picture God in this way. Over time, though, the Hebrew people came to see their God as much more than a warrior fighting to defend a nation. As with the primary gods of the nations around Israel, Yahweh would come to be seen as the Creator who brought the world into being. The opening chapters of the book of Genesis present this view of Yahweh/Elohim. He would also be thought of as the divine judge, defending the cause of the oppressed and bringing fearful judgment against their oppressors.

The God of the Hebrew Bible is a God characterized by hesed (steadfast love, kindness, devotion, loyalty), but also capable of severe anger. Hosea, especially, pictures God as a loving partner with Israel, a devoted spouse who remains loyal even after being betrayed.

Whether this devoted loving God is also responsible for the presence of pain and suffering in human experience is a matter that is not clearly settled in the Hebrew Bible. By the New Testament period a second power—the Devil—would be presented as the purveyor of evil.

Ancient Israel struggled with the notion of God in a way that eventually led to a radically monotheistic claim: there is only one God. No others exist.

The early Christian claim that Jesus of Nazareth was the Son of God, and was himself God would challenge this monotheistic understanding and result in vibrant, often heated debates over the nature of God that would last well into the next two centuries.